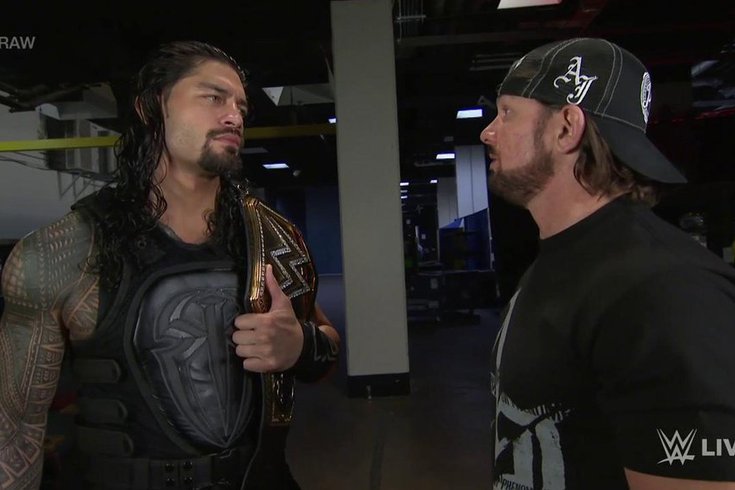 Roman Reigns defends the WWE World Heavyweight Championship against AJ Styles for the first time ever on Sunday night.

The Allstate Arena in Chicago [for all intents and purposes] will host Sunday’s Payback pay-per-view that will see Roman Reigns make his first title defense since winning the WWE World Heavyweight Championship earlier this month at WrestleMania. AJ Styles gets the honor of being the first superstar Reigns will defend against, and there’s already some shenanigans going on with the debut of Luke Gallows and Karl Anderson on WWE television. Will they play a part in the main event Sunday?

The Women’s, United States, Intercontinental Championships will all be on the line, too, so we may have many new champions come Raw on Monday. But first, let’s delve into Payback.

Here’s what I think will go down this Sunday:

This has to be it for this feud, right? If you can even call it a feud. It’s been one of the worst booked feuds in as long as I can remember. The premise is good, but eventually, Ryback has to get the better of the champion and win the title. He did that a couple weeks ago on SmackDown.

I think he’ll do the same this Sunday and finally capture the United States Title.

This is a good first feud for Corbin to get his feet wet on the main roster. An NXT All-Star, so to speak, Corbin is finally making an impact each week on Raw, and I think that continues with an impressive win over Ziggler Sunday night. Ziggler’s shown some fire in this feud, but I don’t think his heart is completely into it, so there’s no reason for him to win this match. Of course, that means he’ll win and they’ll wrestle two more times next week on television.

Corbin wins. As he should.

I am digging Miz’s new, more polished character with his real-life wife, Maryse, back in the WWE fold. The two have great on-air chemistry and the Miz TV segments have actually been a lot better in my opinion.

And that’s why I think Cesaro wins the Intercontinental Championship on Sunday. Imagine a ridiculously aggravated Miz and Maryse going nuts due to

Yeah, this is me thinking a little ahead. Obviously, it could be completely wrong. But I still think we see a new Intercontinental Champion crowned at Payback.

WWE’s video package featuring the feud of Zayn and Owens was spectacular. It was something many, including myself, clamored for once Zayn came down at the Royal Rumble and went at it with Owens. From there, we thought the two were destined for their WrestleMania match.

And it’s going to be spectacular.

If you’re familiar with the two, you know why. These two guys tell a tremendous story during matches and almost always gets me emotionally invested into it, which is so hard to do nowadays with so many things taking away one’s attention. My eyes will be glued to my TV during this match.

It doesn’t matter who wins this match. They’re going to have another one. Possibly a third. So Zayn doesn’t necessarily have to win this match for it to be great. And, now I think he won’t win due to him giving both Lana and Rusev the middle finger gesture on Raw after his match. Something weird was going on there the entire match, and even before the match. I don’t know what it is, but it didn’t seem like it was all for show.

However, if Rusev interferes in the match this Sunday, then we’ll know why.

This feud was teased all the way back to last year’s Night of Champions pay-per-view in September. Jericho is now a full-fledged heel, and he’s become WWE’s best heel at the moment. That’s pretty sad. Owens is a close second, but I’m not sure why other talents don’t take what they see Jericho do and incorporate it into their own angles.

Sure, it’s easy to be the heel against Ambrose. The crowd loves him. I don’t think they’ll stop loving him. And he’s been on the receiving end of a few butt whoopings by Jericho, too. So I can see him get the win here, but I’m going to go against conventional wisdom because, well, I can.

I don’t think it’s the last match between the two, anyway, and they’ll have a rematch, much like Zayn-Owens will, at Extreme Rules.

Two WWE Hall of Famers will be in each woman’s corner, as Ric Flair will, as usual, be in the corner of his daughter and WWE Women’s Champion, Charlotte, and Bret Hart is in the corner for his niece, Natalya.

With WWE shelfing Sasha Banks’ run to the Women’s Title until likely SummerSlam, they could have done a lot worse than Natalya as Charlotte’s next feud. I think the feud has been really good and it’s a well told and well thought out story. By this point, it’s time for Charlotte to dump her father, so having both Ric Flair and Bret Hart involved seems to overshadow the women in this match.

A lot of people are going to play it up that way, too. Instead of focusing on the guys just because they’re Flair and Hart, I’d suggest focusing on the women. They’ve told a great story the last few weeks and the feud has been on par with some of WWE’s best this year. Let the women tell the story. I see why some people think Flair and Hart overshadowing the match is a bad thing, but I’m worrying about the women and how the match inside the ring will go. And I have every belief in the world this is one that could steal the show. I just don’t think the title will change hands.

Enzo Amore and Colin Cassady vs. The Vaudevillains

The No. 1 Contender Tag Team Tournament, sponsored by Booty O’s, will end at Payback with either Enzo and Cass or The Vaudevillains becoming the new No. 1 contender’s to The New Day’s WWE World Tag Team Championships.

There are a couple ways to look at this. One, being the most logical and likely to happen, the heel team of The Vaudevillains will defeat Enzo and Cass and be in line to compete against the face champions, The New Day. The Dudley Boyz might not exactly be done with Enzo and Cass, so they could interfere in the match and cost them a chance at the titles. So we’d have Vaudevillains/New Day and Enzo and Cass/Dudleyz.

Your winners and No. 1 contenders to The New Day: The Vaudevillains

This is probably the best angle WWE has done since Evolution reformed and feuded with The Shield two years ago. Huh, go figure. Roman Reigns is involved in both of them.

Styles being the No. 1 contender to the championship definitely came out of nowhere, but now with Luke Gallows and Karl Anderson in the mix, a lot of people aren’t exactly sure what to expect.

Add that Finn Bálor could be called up to the main roster any moment; Sunday’s main event has a different feel to it. And that’s awesome. However, there’s absolutely zero chance Reigns loses the championship less than a month after winning it again. They took the title off him at the Royal Rumble so he could have his WrestleMania moment. He’ll have it for a while.

"We are not going to jeopardize your opportunity." - #LukeGallows to @AJStylesOrg on his match at #WWEPayback! #RAW pic.twitter.com/35kLdoEgp2

So what this match really could be about is how Reigns and Styles come out of it in terms of not only character development, but if either of them will be a part of a stable – or maybe both of them will. The Usos have sided with their real-life cousin after they were attacked by Anderson and Gallows. Styles, who’s looked rather not thrilled with his friends and their attacks, might just be playing a mind game. He might not be acting at all. I think Reigns will walk away from the Allstate Arena with the championship, but something tells me the main story will revolve around Styles. And that’s A-OK with me.

This is pretty stacked. With Vince McMahon also set to make an appearance to determine who will run Monday Night Raw in the future, we could possibly see the beginning of a second brand split. We may not see anything different than what we’ve seen the last four years. It’s all up in the air at this point. And I think that’s why this is a pay-per-view that will shatter expectations. I’m pumped.