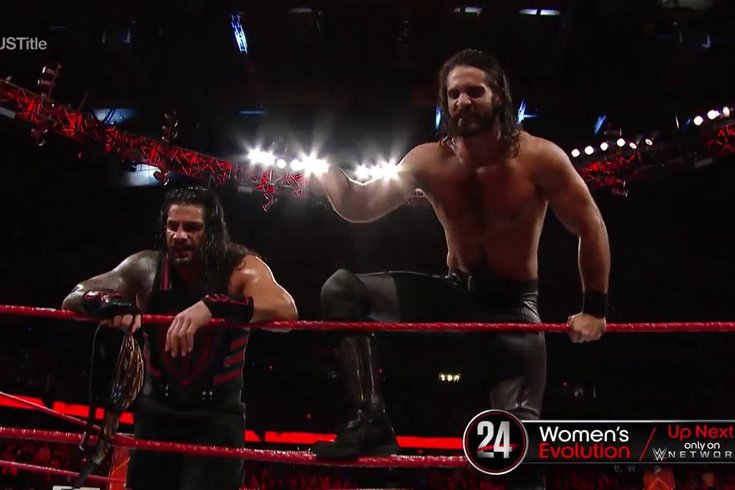 Roman Reigns and Seth Rollins continued their quest to get even with Kevin Owens, Chris Jericho and Braun Strowman on Monday night.

Chicago’s Allstate Arena was the site for Raw on Monday night, and the last episode of 2016 left a lot to be desired as we head into 2017. We didn’t really get much progression in storylines or angles, and that may be because of the holidays.

The show once again centered around the WWE Universal Champion and a few others. Here are some of the main stories coming out of Monday Night Raw:

Could Reigns and Rollins get revenge on Braun Strowman?

Stephanie McMahon opened the program hyping the episode, and in the middle of her promo, the crowd wasted no time with the “CM Punk!” chants. McMahon went right back at them, saying if they continued the chant for another two minutes and 15 seconds, they’d last one second longer than Punk did. Ostensibly in WWE, she means. Sick burn.

Seth Rollins and Roman Reigns came out, demanding a shot at Braun Strowman, who annihilated them last Monday night. McMahon made her decision, giving Rollins a shot at Strowman while saying Reigns would defend his United States Championship against someone of her choosing.

Later in the program, the WWE Universal Champion Kevin Owens and his best friend, Chris Jericho, confronted McMahon backstage and seemingly wanted Reigns to have to face both of them. McMahon chose only Owens, so we would be treated to a Roadblock rematch. Swell.

Owens and Reigns tangled up in the main event, and Jericho wasn’t far behind. In the middle of the match, Jericho ran down and distracted Reigns, giving Owens a prime opportunity to capitalize and try to become the new United States Champion. Alas, the match went on as Owens failed in his quest to pin the champion

Thinking he got rid of Rollins with two Codebreakers was Jericho’s error, as Rollins ran down to the ring and hit a Pedigree on Jericho. Owens then nailed him with a superkick, but Reigns was able to hit the spear and retain the United States Championship.

After the match, Rollins nailed Owens with the Pedigree and Reigns hit Jericho with a spear outside of the ring. Two-thirds of The Shield end 2016 standing tall on Raw.

Rollins, Strowman go at it with Jericho, Zayn not far away

Prior to joining Owens for his championship match against Reigns, Jericho attacked Rollins after his match with Strowman. Strowman had attacked the Shining Stars, Darren Young and Bo Dallas, causing that match to end in a No Contest, and then promptly waited for Rollins to come out for their match.

Rollins obliged and the fight was on. However, Sami Zayn’s music hit and with Strowman waiting for him in the aisle, he attacked him from behind out of nowhere. Of course, it should have been a disqualification and a win for Strowman, but the WWE website is listing the match officially as a No Contest, which doesn’t make any sense.

Not long after, Jericho attacked Rollins and hit The Codebreaker on him twice, likely setting up another match between the two down the road. Maybe next Monday night?

Bayley screwed out of title shot

In a surprising development, WWE decided to go with some continuity on Monday night in their big women’s program. Last Monday, Bayley defeated Charlotte Flair in a non-title match to become the No. 1 contender to the Raw Women’s Championship, but Flair’s right shoulder was off the mat before the three count. The video was shown on television and to the audience in Chicago. Flair said the decision was reversed after contacting her lawyers, and in the settlement of her giving Bayley another shot to get a shot at her title, she’d pick the referee.

And, of course, that paved the way for Dana Brooke’s return to television. Clearly trying to sabotage Bayley’s efforts, Brooke was nailed with the Bayley-to-Belly suplex as another referee came down. Brooke recovered in time to pull the other referee away as Bayley nailed Flair with her finisher, and Flair got the win after using the ropes and rolling Bayley up for the three count.

The end of The New Day?

I think the end of The New Day is upon us. I know it’s not exactly breaking news, but having a rematch one week after losing the tag titles and losing to Cesaro and Sheamus again doesn’t bode well for their long-term future. Of course, professional wrestling is cyclical and The New Day’s demise was coming anyway.

• Nia Jax d. Scarlett by pinfall via a Samoan Drop.

• Neville d. TJ Perkins by pinfall after reversing the Kneebar into a pin while holding Perkins’ tights.

• Non-Title: Charlotte Flair © d. Bayley by pinfall after Flair used the ropes to pin Bayley with a rollup. Dana Brooke was the special referee.

• Braun Strowman vs. Seth Rollins ended in a No Contest after Sami Zayn interfered and attacked Strowman. Jericho also attacked Rollins after the match. [Note: It really should be ruled a Strowman disqualification victory since Zayn attacked Strowman and then the bell rang, but WWE’s website is calling it a No Contest officially.]

• Non-Title Cruiserweight Match: Rich Swann © d. Ariya Daivari by pinfall via the Swansong. Swann accepted Neville’s challenge for a match on 205 Live on Tuesday night. Neville attacked him during the post-match promo.