WWE Raw: Everyone’s marking their territory for the Royal Rumble 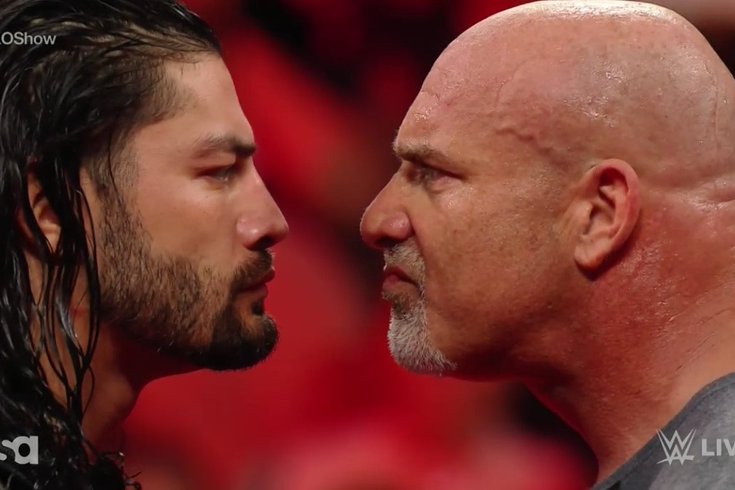 Goldberg returned on Monday night and faced off with several superstars, but none bigger than Roman Reigns.

The Amalie Arena in Tampa, Fla. was the site for Raw on Monday night, just four weeks out from the January staple, the Royal Rumble. The build to this event started well before the new year hit, and Monday night began what will be an interesting month of WWE television.

The Raw general manager was back, and he looked like an entirely new person. Mick Foley was sporting a new haircut that made him look 20 years younger as he opened the program with “Tampa” written on his hand. It was pretty funny that he can laugh at himself after a few weeks ago he said they were in Pittsburgh when they were really in Columbus.

The WWE Universal Champion Kevin Owens and his best friend Chris Jericho interrupted Foley and said they weren’t taking his personal gripes against them any longer. The Raw commissioner, Stephanie McMahon, then came out and, despite a little bickering between herself and Foley, made two matches for the night. Owens would take on Seth Rollins and whoever lost that match would be barred from ringside during Roman Reigns’ match against Jericho for the United States Championship.

Before that, though, Foley said Owens would have the chance to host his first-ever segment, “The Kevin Owens Show.” Man, Foley’s awesome for making a T-shirt come to life! Owens’ first guest? Well…

Goldberg returned to Raw on Monday night, four weeks before he’s set to enter the Royal Rumble match at the Alamodome in San Antonio. He was put in a segment with Owens, who was debuting his first edition of “The Kevin Owens Show.”

After Owens and Jericho bickered for a bit during the segment, stemming from Jericho announcing he’d be in the Royal Rumble match and Owens being mad about it, Goldberg’s music hit and he wasted no time getting to the ring. Goldberg and Owens were nose-and-nose until Paul Heyman came out and interrupted them. Not long after, Braun Strowman came out and everyone began marking their territory for the Royal Rumble.

Goldberg and Reigns hit the double spear on Strowman and Goldberg posed as the show went off the air.

Before Owens had Goldberg on his show as a guest, he took on Rollins in the first match of the night. These two always have really good matches, and there was nothing different here. Rollins wound up getting the win by disqualification after Owens hit him in the ribs with the ring bell in plain sight of the referee. That meant Owens would be barred from ringside during the United States Championship match.

In a very good match, I thought there was a chance Reigns could lose the championship to Jericho which would probably confirm my theory that he’d win the Universal Championship at the Royal Rumble. But that didn’t happen.

Despite Jericho kicking out of a Superman Punch and almost getting Reigns disqualified by throwing him the title when the referee wasn’t looking and acting like Reigns hit him with the belt, the referee decided not to disqualify the champion. During the confusion, Jericho hit The Codebreaker on Reigns, but the champion kicked out and eventually hit a spear on Jericho to win.

In a Last Man Standing match, Strowman was certainly the last man standing. In his match against Sami Zayn, Strowman brutalized his smaller opponent, despite Zayn’s valiant crossbody on Strowman through a table off the stage. But that didn’t keep Strowman down. After hitting Zayn with two powerslams on the floor, Strowman was declared the winner after Zayn couldn’t make the 10-count.

After the match was over, Strowman continued his assault on Zayn, throwing him off a stretcher and throwing him into the barricade.

Could Bayley become the No. 1 Contender to Charlotte?

In a backstage segment earlier in the program, the Raw commissioner was rather arrogant in her attitude towards Bayley, who approached her in her office. McMahon made it clear she wasn’t a fan of Bayley and was a big fan of Charlotte Flair, who had the pedigree and was the Queen of Pay-Per-View. McMahon said Bayley was, "…just Bayley.”

Bayley got her chance to retort, saying nothing is going to stop her from attaining her dream and that “Just being Bayley” was good enough for her. McMahon awarded her with a No. 1 contender’s match for the Raw Women’s Championship … against Nia Jax.

Flair joined commentary during the match. Towards the end, Sasha Banks’ music hit and distracted Jax, which allowed Bayley to hit the Bayley-to-Belly suplex on Jax to become Flair’s opponent at the Royal Rumble.

The New Day with … Titus?

In maybe one of his best promos ever, Titus O’Neil interrupted The New Day during their promo and wanted them to accept him as their newest member. It made for some interesting television … and a match between him and Xavier Woods after. Woods got the win with a sunset flip.

In related news, Big E, Kofi Kingston and Woods all declared their entries into the Royal Rumble match.

Karl Anderson gets a big win over Cesaro

Karl Anderson with Luke Gallows in his corner defeated Raw Tag Team Champion, Cesaro, with Sheamus in his corner. Sheamus started the match on commentary but decided to get a closer look when Gallows was looking a little antsy on the outside. Gallows wound up hopping onto the apron when Cesaro had Anderson perched atop the top turnbuckle, and Sheamus pulled him down. Unfortunately for Cesaro, the rope shaking when Gallows fell caused him to fall from the ropes and wasn’t exactly in an enviable position. Anderson capitalized and hit Cesaro with a neckbreaker from the top rope to get the victory.

WrestleMania is heading back to The Big Easy

Late Sunday night, Pro Wrestling Sheet’s Ryan Satin reported that WWE would be bringing WrestleMania back to New Orleans. An official announcement by WWE has yet to be released but multiple reports backed Satin.

• Non-Title: Seth Rollins d. Kevin Owens (c) by disqualification after Owens hit Rollins in the ribs with the ring bell. Owens would be banned from ringside during the U.S. Title match.

• Karl Anderson w/ Luke Gallows d. Cesaro w/ Sheamus by pinfall after hitting a neckbreaker off the top rope. Sheamus pulled Gallows off the apron but caused Cesaro to fall onto the ropes, allowing Anderson to capitalize.

• Last Man Standing match: Braun Strowman d. Sami Zayn after hitting him with two powerslams on the outside of the ring and Zayn couldn’t make the 10-count.

• Cruiserweight match: Drew Gulak w/ Tony Nese d. Cedric Alexander by pinfall via a rollup after Alexander was distracted by Nese and Fox on the outside.

• Handicap match: Rusev/Jinder Mahal d. Big Cass by pinfall after Rusev hit Cass with a kick to the head.

• No. 1 Contender’s match for the Raw Women’s Championship: Bayley d. Nia Jax by pinfall after hitting her with the Bayley-to-Belly due to her being distracted by Sasha Banks.