WWE Raw: Goldberg is coming; Sasha-Charlotte inside Hell in a Cell confirmed 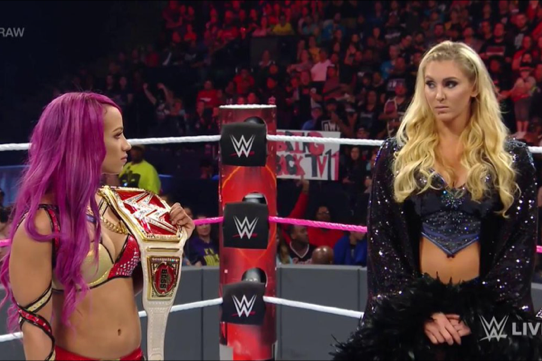 Sasha Banks challenged Charlotte to a Hell in a Cell match on Monday night.

With 20 days to go until Raw’s next pay-per-view, Hell in a Cell, Monday night was used to stack the card in what looks to be another promising event for the Raw brand later this month.

The Oracle Arena in Oakland, Calif. hosted the latest Raw offering, which boasted a big challenge to Bill Goldberg, Chris Jericho vying for a spot in the Hell in a Cell main event alongside his best friend Kevin Owens and his challenger, Seth Rollins, and the confirmation of historical proportions as we’ll see the first-ever women’s Hell in a Cell match.

Banks and Charlotte were already set to face each other at the upcoming Hell in a Cell pay-per-view on October 30. Banks wanted to up the ante and challenged Charlotte to a contest inside the Hell in a Cell. It would mark the first time in history two women would fight inside the structure.

As Charlotte made her entrance, Rusev’s music hit and he grabbed the mic. He ran down the Women’s Revolution and didn’t make many friends while doing so. Charlotte called him out while accepting Banks’ challenge at the same time. For a slight moment, Banks and Charlotte showed some unity and shoved Lana while Rusev threatened to retaliate.

This whole sequence would lead to a mixed tag team match with Banks and Reigns teaming up against Charlotte and Rusev. Before the match, Lana confronted Charlotte and told her to not get any ideas about Rusev because he was her man. I kind of liked that subtle storytelling.

Later in the night, Banks would get Charlotte to tap out again to the Bank Statement to get the win for her and Reigns.

Goldberg was a guest on ESPN’s SportsCenter with Jonathan Coachman last Wednesday night as part of the ongoing promotion of WWE 2K17. In that interview, he mentioned he probably would come back for a match against Brock Lesnar, but has nothing to prove because he already beat him once before at WrestleMania XX.

On Monday night, Lesnar’s manager, Paul Heyman, decided to address those comments from Goldberg. Heyman said he was authorized on behalf of Lesnar to challenge Goldberg to a fight and that Lesnar was ready for him. It would be the first time the two behemoths would be inside the same ring in over 12 years.

The reasoning behind the challenge? Goldberg being the one who defeated him at WrestleMania XX before both men left WWE. Heyman said Lesnar was irritated and wanted a fight.

Shortly after the challenge was made, Goldberg took to Twitter to let the world know he was coming to Raw next Monday night live from the Pepsi Center in Denver.

Booking my flight to answer that big mouth @HeymanHustle 's challenge next week in person on #MondayNightRaw #WhosNext? #seeyathere @WWE

There was a lively discussion on Twitter during Raw about Goldberg returning and how a match with Lesnar would be received from the audience today. I understand if people are tired of the past stars coming back for matches, but if they can still go physically, nothing should be stopping them. WWE is all about making money and a Goldberg-Lesnar match in 2016 would still draw a lot. Whether it happens at November’s Survivor Series pay-per-view or later than that, the match will be a big spectacle.

This isn’t about anyone getting a rub. It’s not about utilizing Lesnar to build a new star on the main roster. Lesnar has killed both Dean Ambrose and Randy Orton this year, so having a new star come up and stand toe-to-toe with him doesn’t really make the current roster look all that great.

If Lesnar beats Goldberg, it will be just like his other matches this year. If Goldberg wins, then maybe he’s not here just for one more match. The onus is on WWE to make the build to the match as great as they can, and I have no doubts we’ll see Goldberg spear Lesnar at some point on Raw during that. For those who aren’t familiar with Goldberg, WWE will make sure they are come match time.

Mick Foley had his Hell in a Cell address where he confirmed Banks-Charlotte would be happening inside Hell in a Cell while also making third Hell in a Cell match. This one would feature Kevin Owens defending his WWE Universal Championship against Seth Rollins. While this feud hasn’t lit the world on fire, and putting it inside a Hell in a Cell makes little sense because of that, I think it’ll be a good match regardless.

But that wasn’t it.

Owens and his best friend forever, Chris Jericho, made their way to the ring. Jericho added Foley to his list … again. Stephanie McMahon, who joined Foley for his address, said that if Jericho could beat Rollins in the night’s main event he’d be added to the Hell in a Cell match for the title, making it a Triple Threat match.

In the main event, Rollins grabbed the win with a small package, and then was attacked by Owens. Rollins was able to fend him off and hit Jericho with a Pedigree and stand tall as the show went off the air. No Jericho in the Hell in a Cell main event, at least for now.

Before they could get set for their tag team tilt against Bo Dallas and Curtis Axel [yes, you read that right], Enzo Amore and Big Cass were attacked from behind in the ring by Luke Gallows and Karl Anderson, who are looking to reinvent themselves already on the main roster.

They hit the Magic Killer on Cass after hitting the Boot of Doom on Enzo. Message sent. Hopefully, this is the only re-invention their characters will need on the main roster.

• Kofi Kingston w/ Xavier Woods and Big E d. Cesaro w/ Sheamus by pinfall via a small package. Cesaro was distracted by Sheamus getting knocked around on the outside of the ring by Big E.

• Bayley d. Cami Fields by pinfall via the Bayley-to-Belly suplex. Dana Brooke attacked Bayley from behind on the stage.

• R-Truth d. Titus O’Neil by pinfall via a rollup after O’Neil got distracted by Goldust at ringside.

• 2-on-1 Handicap Match: Braun Strowman d. The Splash Brothers (Steven and Clay) by pinfall via a running powerslam and reverse chokeslam.