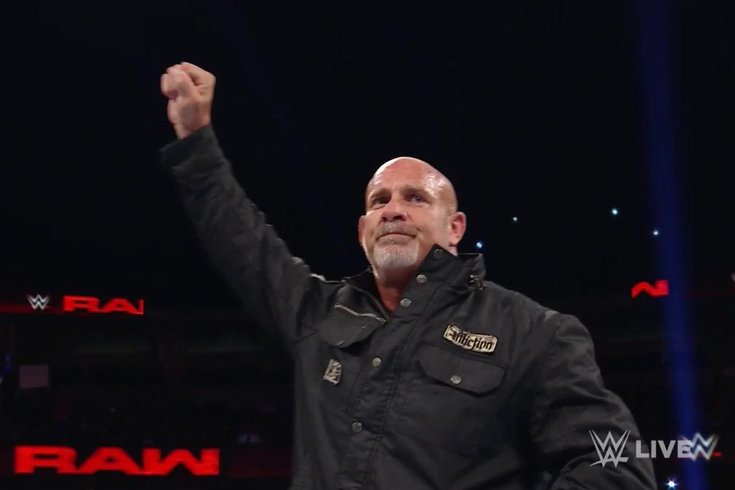 Bill Goldberg returned to WWE on Monday night and accepted a challenge to fight Brock Lesnar.

Eleven o’clock was the time. Denver’s Pepsi Center was the place. And the USA Network was the channel. After 12 years outside of WWE, Goldberg made his return Monday night on Raw to accept the challenge of Brock Lesnar, through his manager Paul Heyman, for a fight.

It’s been a long time since we’ve seen Goldberg in the ring in WWE, and the last time he did it was against Lesnar at WrestleMania XX. Now, it seems like the stage is set for Goldberg vs. Lesnar II at Survivor Series in Toronto.

Goldberg is back; accepts Lesnar’s challenge

About an hour and a half before the return of “The Man,” as Bobby Heenancoined him in WCW, Paul Heyman sat down to let the entire world know that his challenge to Goldberg on behalf of Brock Lesnar last Monday was completely rhetorical. Now that the challenge was out, and Goldberg was in Denver, there was no way he’d refuse to accept it.

And Heyman was right.

After his entrance, including the walk backstage and standing in the fireworks, Goldberg had the moment hit him inside the ring as he tried to compose himself. He was brought to tears as the crowd chanted, “Goldberg! Goldberg! Goldberg!” Goldberg addressed where he’s been and the media tour he’s been on since being involved with WWE 2K17, and accepted the challenge to fight Lesnar. He ended with, “Brock Lesnar, not only does that mean that you’re next, but most importantly, it means, Brock Lesnar, you’re last!”

#TheBeast @BrockLesnar is not only NEXT for @Goldberg...
He's LAST! #RAW #Goldberg pic.twitter.com/kh0wmlPObg

There are still many people who are criticizing this move by WWE. I understand the criticism, but it doesn’t necessarily mean I agree with it. Goldberg and Lesnar is all about making money and having as close to a dream match as you can in 2016. Yes, their match at WrestleMania XX in 2004 was terrible, but this time around, both guys aren’t worried about what’s in the future. They’re in the here and now, and I have a sense they’ll try to bring out the most entertaining match possible.

Is Goldberg one of the greatest ever? Probably not. He’s not even a great wrestler. I don’t think anyone would argue that. But he’s a big name and there was substantial proof on Monday night that people remember the wrestler, Goldberg.

And a Goldberg-Lesnar match in 2016 will still get the butts in the seats.

Sasha Banks, Charlotte sit down with Hall of Famer

WWE Hall of Famer Lita sat down with both Raw Women’s Champion Sasha Banks and her challenger at Hell in a Cell, Charlotte, to build further to their match inside Hell in a Cell on October 30.

Charlotte will look to become a three-time Women’s Champion.

Even though Rollins defeated Jericho last Monday night with a potential spot for Jericho in Hell in a Cell’s main event on the line, both Rollins and Jericho thought Denver would be an appropriate place for a return match. This time, nothing was on the line. Jericho’s only wish was that Owens remain backstage for the match, and the WWE Universal Champion obliged.

But Owens just couldn’t help himself.

He came down to ringside and tried to prevent Rollins from reaching the ropes when Jericho locked in the Walls of Jericho submission. The referee saw Owens’ attempts and Jericho was forced to break the hold, and he subsequently ran right into a Pedigree by Rollins and was defeated for the second time in as many weeks.

Owens and Jericho continued a tease of a split, but I don’t think WWE can split these guys up any time soon. They’re one of the hottest acts on Raw, and they can easily carry this through the winter to WrestleMania time.

Rusev finally gets the upper hand on Roman Reigns

Rusev was giving a promo inside the ring introducing his family when Roman Reigns’ music hit and he walked down to the ring to join him. I thought we would see Rusev get the upper hand, but I didn’t think we’d see Rusev lock in The Accolade on Reigns on the steel steps inside the ring and leave him lying.

Does this bode well for Rusev heading into their Hell in a Cell match? Probably not. It likely won’t make a difference. But at least Reigns beating up Rusev took a break this week.

Isn’t 2016 great? Well, for technology, at least. One week ago, Sheamus was busy on his phone while his tag team partner Cesaro was in action against Kofi Kingston, one-half of the Raw Tag Team Champions. Monday night, Cesaro returned the favor as Sheamus was in action against the other half of the Raw Tag Team Champions, Big E, and was more concerned with chatting with folks on Facebook Live and chilling with the audience.

Distracted by his tag team partner in the audience having a good time, Sheamus was caught by a big splash in the corner and rolled up by Big E for the pin.

Sheamus and Cesaro will challenge The New Day for the tag titles at Hell in a Cell, and I think there’s actually a very good chance they’ll dethrone the longest-reigning champions.

Braun Strowman has found some competition

When asked backstage why he stood up to Strowman, Zayn simply said, “Because nobody else will.”

What’s up with Bayley?

Unfortunately for Bayley, she was, for some reason, jobbed out to Dana Brooke on Monday night in one of the most terrible-looking finishes I’ve seen in a long, long time. Bayley shouldn’t be losing, first of all, and second of all, Brooke’s attempt at using the ropes as leverage to pin Bayley completely backfired and she wound up pinning her clean because her legs couldn’t reach the ropes.

It was bad. Really bad. I almost didn’t even want to mention it. Bayley should be wrestling seldom and being booked as a huge star to challenge whoever comes out of the Banks-Charlotte feud with the title. But it’s looking bad for her right now.

• Seth Rollins d. Chris Jericho by pinfall via a Pedigree.

• Big E d. Sheamus by pinfall via a rollup after Sheamus was distracted by Cesaro.

• Dana Brooke d. Bayley by pinfall as she rolled her up after Bayley hit her shoulder into the ring post.

• 3-on-1 Handicap Match: Braun Strowman d. The Mile-High Trio by pinfall with a pair of reverse chokeslams.