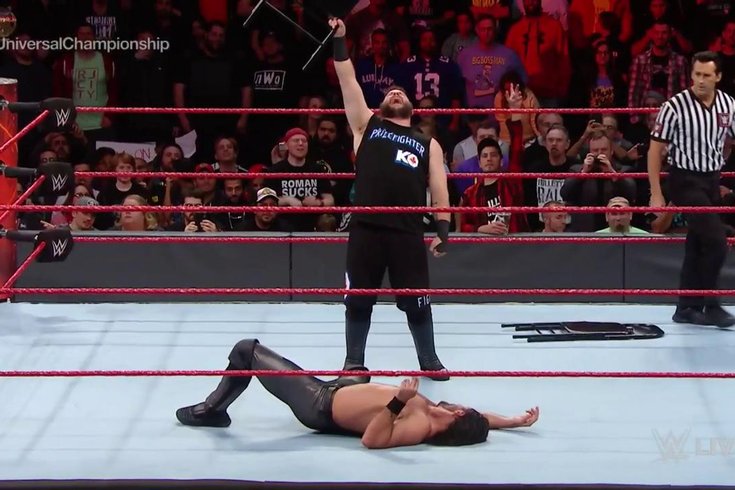 Kevin Owens stands tall with a steel chair over Seth Rollins in their No Disqualification main event on Monday night for the WWE Universal Championship.

For the third night in a row, the Air Canada Centre in Toronto, Ontario hosted a WWE live event – this time being Monday Night Raw. Coming off a huge Survivor Series pay-per-view, a show I was quite high on and thought delivered well to the fans, I was interested to see how the Raw brand would respond not only to the Goldberg-Lesnar ending but also to losing the big five-on-five men’s elimination match to SmackDown while winning the women’s and tag teams’ elimination matches respectively.

Luckily, we were treated to a pretty good show. Of course, a three-hour show is going to have many lulls, and this Raw was no different. But it was one of the better episodes lately and we have plenty to be excited about heading into 2017.

Hot off his unpredictable and surprising 1:26 win over Brock Lesnar, Goldberg opened Raw on Monday night with a promo inside the ring. He thanked the fans and his son for making him believe he could be a superhero again. I know all of this is scripted, but man I bet Goldberg feels the exact same way as he says he does outside of the ring.

Many thought this would be a farewell for Goldberg. Not so fast.

The Man said that when he went backstage after his match with Lesnar on Sunday night, Raw commissioner Stephanie McMahon approached him and asked if he had one last title run left. His answer was yes, and the road to another title run begins in January at the Alamodome. Yep, Goldberg will be in the Royal Rumble match in San Antonio.

Chris Jericho didn’t look very happy with Kevin Owens on Sunday night after he destroyed The List of Jericho over AJ Styles’ head. So on Monday night, Jericho addressed the issue in an edition of The Highlight Reel. Owens quickly came out before Jericho could say much and the two seemed to be really mad at each other. It looked like one of the best parts of WWE television was going to blow up prematurely.

Alas, that wasn’t the case. They both were teasing blaming each other for Team Raw’s loss to SmackDown at Survivor Series, but then they both blamed Roman Reigns and hugged each other and laughed.

That was a close one.

Shortly after, Seth Rollins came out and challenged Owens to a championship rematch right then and there. Rollins attacked both Owens and Jericho, but the numbers proved to be too great as they quickly got the advantage on him. Reigns’ music hit and he came down to save Rollins from a beating, and it looked like we were just going to get the same old tag team match we’ve seen time and time again.

Raw general manager Mick Foley came out and made the main event for the night – a No Disqualification Match for the WWE Universal Championship between Owens and Rollins with both Jericho and Reigns barred from ringside.

I guess if there’s no disqualification, Jericho and Reigns can do whatever they want. But I digress.

Owens vs. Rollins brought the goods

The main event match was very good and featured a brawl all around the building. It’s been a while since we’ve seen something like that and it fit. There were several near falls with Owens going through two chairs thanks to Rollins and then being powerbombed through a table in the corner. Owens kicked out each time before the match spilled into the crowd.

Rollins climbed up to the upper level as he countered an Owens powerbomb attempt and jumped onto Owens with a scary dive. The two eventually made it back to ringside, but when Rollins attempted to jump from the barricade onto Owens, a masked individual pulled his feet from under him and he went crashing face first into the barricade.

Rollins was able to yank the mask - a Sin Cara mask of all things - off this individual and it was none other than Jericho. Owens gained momentum after Rollins hit Jericho with The Pedigree on the outside and powerbombed Rollins onto the ring apron. He quickly sent him into the ring and pinned him to retain the title in a fantastic television main event.

Flair and Banks set to battle next Monday for the title

Charlotte Flair – as she’s known now on WWE television – came out with Dana Brooke to describe why she’s The Queen of WWE and no other women were worthy of her. It didn’t take long for the former Raw Women’s Champion Sasha Banks to head to the ring to confront her rival.

Banks said she was due a rematch from Hell in a Cell and she wanted that rematch then and there. Flair baited the Toronto crowd by agreeing to a match against Banks, but for next Monday night in her hometown of Charlotte, N.C. Meanwhile, Nia Jax came out and confronted Banks, which quickly turned into a two-on-one beating by Jax and Flair on Banks before Bayley came down to help her.

That resulted in an impromptu tag team match where Banks got Flair to submit to the Bank Statement, making her case stronger and stronger to become the next Raw Women’s Champion for a third time.

A Triple Threat No. 1 Contender’s match took place on Monday night to determine who would face Brian Kendrick for the Cruiserweight Championship next Tuesday night on the debut of 205 Live on the WWE Network after SmackDown. Rich Swann, Noam Dar and the former Cruiserweight Champion TJ Perkins had a good three-way match as Kendrick took it all in on commentary.

Swann became the No. 1 contender after hitting Perkins with a splash as he had Dar in the kneebar, and then a spinning heel kick did Perkins in for good.

Sheamus and Cesaro were rewarded from their survival in Sunday night’s Survivor Series with a tag title match against The New Day Monday night. The Sheamus/Cesaro team has grown on me, but they’re still not tag team title material on the Raw brand. Maybe they’d fit better on SmackDown with their joke of a tag team division.

New Day got the win, and now they’ll defend their tag team titles against Luke Gallows and Karl Anderson, who won a No. 1 Contender’s match against The Golden Truth later in the show, next week on Raw.

We may have gotten a glimpse of Rusev’s and Big Cass’ next clash … and it might be with each other. In a comedy bit backstage, somebody stole Enzo Amore’s clothes, so he was walking around buck naked. Luckily, even though it was “live tv,” Amore’s nether regions were pixelated so the viewers at home didn’t have to see anything. He did run into Lana backstage, however, and tried hitting on her, much to her husband’s chagrin. Big Cass came in the picture and he and Rusev exchanged words.

Later on in the program, Rusev decimated Amore and made him submit to The Accolade before Cass got in the ring and had Rusev retreating. I could dig a Cass-Rusev feud. I just don’t know where that’d leave Amore in the meantime.

I find it interesting that Sami Zayn was punished for not bringing the Intercontinental Championship over to Raw, but Rollins was given a championship match against Owens even though he lost against SmackDown, too. Weird.

Braun Strowman completely dominated Zayn, who didn’t get a lick of offense in on him. Maybe that had to do with Strowman attacking him from behind during his entrance, but this was made to have Strowman look even more of a monster than he already does. I’ll give it to him - he’s improved dramatically since his debut and he’s not a chore to watch in the ring anymore.

But man, I feel for Zayn. He sold the beating really well. Foley had to come out and stop the match on his own.

• Raw Tag Team Titles: New Day © d. Sheamus/Cesaro after Kofi Kingston rolled up Cesaro as Xavier Woods grabbed Sheamus from the outside so he couldn’t break up the pin.

• Rusev d. Enzo Amore by submission via The Accolade.

• Braun Strowman d. Sami Zayn by referee stoppage after Zayn couldn’t defend himself any longer. Mick Foley came out to stop the match.

• Sasha Banks/Bayley d. Charlotte Flair © /Nia Jax by submission after Banks got Flair to tap out to the Bank Statement.

• Triple Threat No. 1 Contender’s Match for the Cruiserweight Championship: Rich Swann d. TJ Perkins and Noam Dar by pinfall after hitting Perkins with a splash and then a spinning heel kick to the head for the pin.

• No Disqualification Match for the WWE Universal Championship: Kevin Owens © d. Seth Rollins by pinfall after hitting him with a powerbomb on the ring apron.