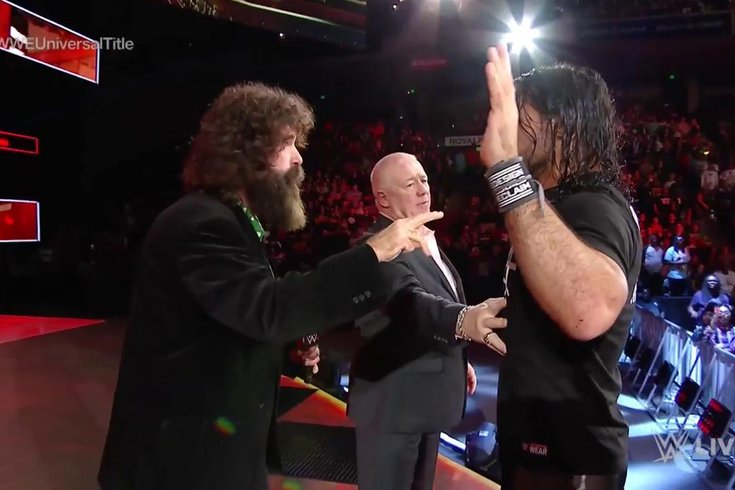 The big story heading into Raw on Monday night from the Royal Farms Arena in Baltimore was whether or not Roman Reigns would find himself inserted into the main event at Clash of Champions. The Raw-branded pay-per-view previously boasted the WWE Universal Champion, Kevin Owens, defending against Seth Rollins.

But Roman Reigns had a chance to get himself into that main event if he could defeat the champion in the main event on Monday night. Was he successful? Stay tuned.

Overall, I thought this was a very good episode of Raw with two great matches to bookend it. Let’s find out what happened on Monday night from Baltimore:

Who’s the No. 1 contender for the Raw Women’s Championship?

Mick Foley kicked off the program with a promo in the ring that saw Sasha Banks and Bayley both vying for a shot at Raw Women’s Champion, Charlotte. Even though Banks vs. Charlotte seemed to be set already for Clash of Champions, the Raw general manager said he was feeling a little change of heart, and made a No. 1 Contender’s match pitting Banks against Bayley. Charlotte’s protégé, Dana Brooke, who’s been treated like dirt the last few weeks by her mentor, also got in on the action after slapping Charlotte right across the face.

The Triple Threat No. 1 Contender’s match was fantastic. Some high-risk maneuvers and Bayley and Banks are just on a different level entirely.

Despite previous reports of WWE telling talents to stop promoting the Charlotte-Banks match that was already set for Clash of Champions, the ending to the No. 1 Contender’s Triple Threat match confirmed we’d all be seeing Banks vs. Charlotte one more time.

Roman Reigns’ shot for the WWE Universal Championship went up in smoke on Monday night, despite the Raw general manager’s insistence to give him every opportunity to not fail.

Reigns and Owens had a very good match full of near falls. Seth Rollins, however, made his presence felt and cost Reigns the match by disqualification after attacking Owens on the outside of the ring. Foley came out and restarted the match, which saw plenty of false finishes.

The WWE United States Champion, Rusev, made his return to distract Reigns as he was set to put Owens away, and after hitting Rusev with the Superman Punch on the ring apron, Owens was able to hit him with the Pop-Up Powerbomb for the win and to keep the main event at Clash of Champions a one-on-one affair.

The Highlight Reel returns with a special guest

Chris Jericho was miffed because his best friend and tag team partner was supposed to be his guest on the Highlight Reel on Monday night. But, instead, he was able to book Owens’ sworn enemy, Sami Zayn.

Jericho compared Zayn to the WWE Universe, saying he’s condescending while, on the other hand, Jericho himself was a giver. A giver of the Gift of Jericho. The two continued to banter back-and-forth when Jericho nailed Zayn with a cell phone in the face and then hit the Codebreaker.

The two will meet in a one-on-one match at Clash of Champions.

Cesaro isn’t out of it yet! The Swiss Superman, who was once down 3-0 in the series against Sheamus, has now won two matches in a row [he won last week in the UK that wasn’t televised]. Every match between these guys has gotten better and better in my opinion, and I’m glad we see Cesaro’s smarts take control here. He grabbed the ropes with his foot and rolled Sheamus up for the victory.

If Cesaro wins next Monday night, the rubber match could take place at Clash of Champions in two weeks.

• Triple Threat Match for No. 1 Contendership to Raw Women’s Championship: Sasha Banks d. Bayley and Dana Brooke after rolling up Bayley after she hit the Bayley-to-Belly suplex on Brooke.

• Best-of-Seven Series – Match 5: Cesaro d. Sheamus by pinfall via a rollup with Cesaro’s boot on the rope.

• Nia Jax vs. Alicia Fox ended in a No Contest after Jax completely destroyed Fox, leaving her unable to compete.

• Jinder Mahal d. Jack Swagger by pinfall via a neckbreaker.

• Epico d. Enzo Amore by pinfall after Primo grabbed Amore’s foot and held it down from outside the ring, allowing Epico to get the three count.