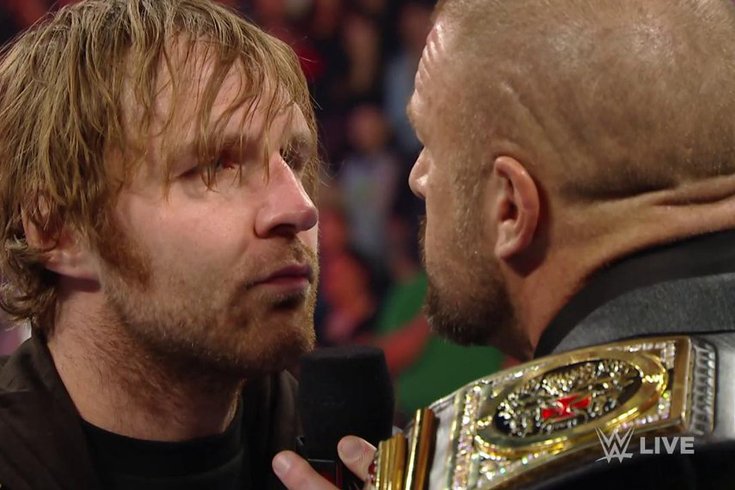 Dean Ambrose wasn’t impressed with Triple H’s beatdown of Roman Reigns last Monday night, so he decided to make a challenge for himself.

For the first time, Monday Night Raw aired on a Feb. 29th, this time from the Bridgestone Arena in Nashville, Tenn. We’re certainly on the Road to WrestleMania, but Monday night focused somewhat on the March to WrestleMania special from Toronto set to air on the WWE Network on March 12. The Undertaker made a special, albeit quick, appearance, and Roman Reigns was out selling his injuries from Triple H’s attack last Monday night.

Earlier in the day, WWE announced that the Fabulous Freedbirds, consisting of Michael P.S. Hayes, Buddy “Jack” Roberts, Jimmy Garvin and Terry “Bam Bam” Gordy, would be inducted into the WWE Hall of Fame Class of 2016 the night before WrestleMania. The legendary tag team joins Sting and The Godfather as the current inductees into the Hall this year thus far.

The WWE World Heavyweight Champion, Triple H, opened the program with a promo in the ring talking about how Roman Reigns should’ve listened to his fear and Triple H did what he had to do last week to teach him a lesson. He then said no one should challenge authority, which brought out somebody that hasn’t had a problem challenging authority since his debut a few years ago.

The Lunatic Fringe, Dean Ambrose, interrupted Triple H in the middle of his promo, effectively challenging authority. Ambrose eventually challenged him for the championship after saying he was the one the champion didn’t want to win the Triple Threat Match at Fastlane. Triple H said he would give Ambrose an answer at the end of Raw, after his match with Alberto Del Rio.

After the League of Nations attacked Ambrose for the disqualification in the main event, Triple H came out and accepted Ambrose’s challenge. He hit him with a pedigree and, much like last week with Roman Reigns, beat Ambrose up on the announce table as the show went off the air.

WWE released this footage of Ambrose being helped to the back after Raw left the air. It looks like they’re really building Triple H strong heading into the main event at WrestleMania, which should make Reigns’ win all the more impressive. It’ll be interesting to see how the live crowd reacts to something they don’t want, though.

I’m assuming we’ll see this title match at the March to WrestleMania special on the WWE Network on Saturday night, March 12.

Stephanie McMahon came out to finally give her speech after winning the Vincent J. McMahon Legacy Award last Monday night before her brother interrupted. She couldn’t get through it and lambasted Shane for embarrassing her and for blackmailing her father. She said the thought of working for him makes her sick and that it wasn’t going to happen. Stephanie showed some great emotion here and it worked for me. There seems to be a hint of real-life animosity here, or it’s just really good acting.

The Undertaker also made an appearance on Raw, albeit a quick one. Vince McMahon introduced the Dead Man, but all he had to say was that the blood of Vince’s son that he will shed at WrestleMania in Hell in a Cell will be on the hands of Vince himself.

Charlotte would later say the two would get their chance to become No. 1 Contender this Thursday on SmackDown.

Next Monday night it looks like we’re in store for a WWE Tag Team Championship match. The newly formed duo of AJ Styles and Chris Jericho defeated the Tag Team Champions on Monday night as Jericho made Kofi Kingston tap out to the Walls of Jericho in a pretty entertaining match. The champions even pulled off a card trick in the middle of it – who else has ever done that?

We’re not sure where Bray Wyatt lies in terms of WrestleMania at this point, but at least he has a plan to save the world.

• No. 1 Contender’s Match for the Divas Championship: Sasha Banks vs. Becky Lynch ended in a draw due to a double pin after a sunset powerbomb from Sasha to Becky.

• The Miz d. Dolph Ziggler by pinfall via a rollup.

• Sheamus and Rusev d. The Lucha Dragons by pinfall after Rusev hit Kalisto in the head with a kick.

• Non-Title: AJ Styles and Chris Jericho d. The New Day (c) by submission after Jericho made Kofi Kingston tap out to the Walls of Jericho.