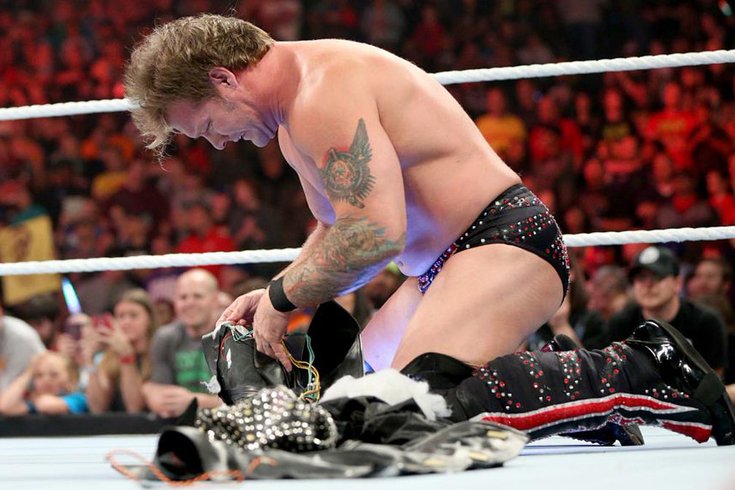 Dean Ambrose made it to Raw in Omaha on Monday night and completely tore up Chris Jericho’s patented light up jacket.

WWE brought Raw to the CenturyLink Center in Omaha, Neb. on Monday night. We’re one week closer to Extreme Rules, where Roman Reigns will defend his WWE World Heavyweight Championship against AJ Styles in an Extreme Rules match. The two came together again on Monday night, and, of course, with their friends close.

But, what else does the card hold? We got some answers on Monday night as the card, which is only two weeks away, took shape. We also saw the debut of a new woman to the roster, and she definitely sent a message to Becky Lynch.

What else happened? Let’s delve. Here are some of the main stories coming out of Raw:

Chris Jericho’s Highlight Reel kicked off things Monday night, but no guest was announced. It was supposed to be Dean Ambrose, but he wasn’t in the building, according to Jericho. Ambrose is apparently suffering from blunt force trauma, vertigo, whiplash, bulging disc, all because of Jericho’s attack last Monday night.

Colin Cassady interrupted him and went toe-to-toe in a promo war with Jericho. That’s not easy to do. After Jericho left the ring, Big Cass called him SAWFT and the fight was on. Except Jericho would get a big boot to the face when he attempted to get into the ring. Point, Cass.

Not only did Big Cass get an opening segment shine and a rub from Jericho – quite honestly the best heel on the roster right now – but it also got him a main event spot for the first time on the main roster.

Good to see Big Cass still getting television time with Enzo Amore on the shelf.

However, Big Cass wouldn’t have the chance to showcase his in-ring skills during the main event.

Dean Ambrose wasn’t down for the count, after all. Ambrose attacked Jericho during his entrance, hijacked his sweet jacket and walked down to the ring. You would think attacking Jericho would be Ambrose’s sweet revenge, right?

Ambrose started ripping apart the jacket, which was $15,000. Ouch.

Big Cass, while not getting an opportunity in a main event match on Raw, still made his presence felt before Raw went off the air

The Club is back

AJ Styles officially announced the reuniting of The Club. No, no, not the Bullet Club. Though, that would’ve been awesome. But, for now, it’s just The Club.

The two factions would face off in a six-man elimination tag team match during the 10 o’clock hour. Jey Uso was the first to be eliminated after Luke Gallows hit him and Karl Anderson rolled him up. The sides would even up after Jimmy Usos pinned Karl Anderson with a small package.

Styles hit Jimmy with the Phenomenal Forearm during a commercial break, so it was down to Reigns vs. Styles and Gallows. But it wasn’t for long. Reigns hit Gallows with the Superman Punch, and it predictably came down to Styles vs. Reigns. But that’s all she wrote.

The two made their way to the outside and Reigns was looking to powerbomb Styles through the announce table before Anderson came out and hit him with a steel chair, causing the disqualification.

After the match, Styles and Reigns teased a big brawl, but it never happened.

Zayn gets another shot at the Intercontinental Championship

Before Sami Zayn’s match against The Miz on Monday night, Stephanie had already decided that there would be a Triple Threat match for Miz’s Intercontinental Championship at Extreme Rules featuring the champion, Cesaro and Kevin Owens. Zayn wanted in, so Stephanie allowed for that possibility if he was able to defeat Miz in a non-title match.

And Zayn did. It was an OK match, but Zayn came out on top after hitting Miz with the Helluva Kick. It’s a hell of a kick. Zayn was added to the match to now make it officially a Fatal Four Way match at Extreme Rules.

Paige gets a huge win against the Women’s Champion

Natalya joined commentary during Charlotte’s non-title match against Paige. Where’s Paige been, anyway? I miss her. Shane would ban Ric Flair from ringside during this match, but Flair somehow made his way down to the ring.

Shane brought out a bunch of referees to escort Flair backstage and Paige rolled Charlotte up for the three count. Charlotte vs. Paige before we see Charlotte vs. Sasha Banks? I’m down.

Another women’s wrestler debuted on the main roster Monday night, as Dana Brooke made her presence felt by attacking Becky Lynch with Emma. There’s no shortage of great female talent on the main roster now, and even more talent in NXT with the likes of Asuka,Bayley and Nia Jax, who could be very, very good in the future. The women’s future is bright in WWE.

Rusev will officially take on Kalisto for the WWE United States Championship at Extreme Rules in two weeks.

And what’s one thing worse than having your champions lose matches? Having your No. 1 contenders lose matches, too. But that’s what WWE did here. I guess it was to try and be unpredictable, even though a Rusev win against Kalisto’s tag team partner would’ve been a great pro wrestling build to their match at Extreme Rules.

But that didn’t happen. Sin Cara rolled up Rusev for a pin after Kalisto kicked him when the referee was distracted by Lana, and that’s all she wrote. Why wouldn’t Sin Cara just fight his buddy for the title now? No need for Rusev.

Not a New Day Monday

The WWE World Tag Team Champions had a rough Monday night as the future Hall of Fame tag team, the Dudley Boyz, defeated the champions in a tag team match. With The Vaudevillains having a shot at the titles at Extreme Rules, does that mean the Dudleyz are next?

Shane and Stephanie were pretty proud of themselves after the night was over.

• Baron Corbin d. Dolph Ziggler by pinfall via the End of Days.

• R-Truth d. Fandango by pinfall via the Lie Detector.

• Non-Title: Paige d. Charlotte (c) by pinfall via a rollup.

• Non-Title: Sami Zayn d. The Miz (c-IC) by pinfall via the Helluva Kick.

• Six-Man Elimination Match: The Family d. The Club by disqualification.

• Non-Title: Dudley Boyz d. The New Day by pinfall after D-Von hit Kofi Kingston with a monstrous clothesline. The Vaudevillains attacked the WWE World Tag Team Champions after the match.

• Chris Jericho vs. Colin Cassady ended in a No Contest after Dean Ambrose attacked Jericho before the match began.