WWE Raw roundup: Paige taunts Charlotte in most controversial angle of the year 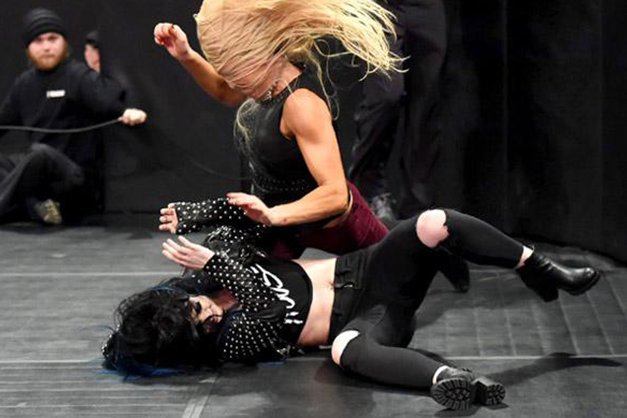 Charlotte and Paige got personal on Monday night, with Paige eventually crossing the line.

We also got a contract signing segment, and you know we all love those. However, this time it was between Charlotte and Paige, who will vie for the Divas Championship on at Survivor Series. It instantly became one of the most controversial angles of the year, especially considering how WWE paid tribute to the victims of the terrorist attacks in Paris on Friday and the passing of Nick Bockwinkel.

We stand in remembrance of Friday’s terrorist attacks in Paris, for the victims, their families & loved ones. #RAW pic.twitter.com/KSaTAcuKBG

Before the night got underway, the roster and crowd took a moment of silence to remember the people killed by the terrorist attacks in Paris last Friday.

WWE Hall of Famer, Nick Bockwinkel, also passed away over the weekend. In the 10 o’clock hour, his passing was mentioned on air and he was remembered by commentators Michael Cole, John Bradshaw Layfield, and Byron Saxton. You can click here for more on the life of Nick Bockwinkel, and also watch a special on the WWE Network if you’re a subscriber.

The WWE World Heavyweight Championship tournament is down to the Final Four. All four quarterfinal matches took place on Monday night, and now all that’s left is the semis and finals on Sunday night.

Four matches took place, and each of them was spectacular in their own way.

Kevin Owens would defeat Neville to advance to the semifinals at the pay-per-view after a fantastic opening match.

Dean Ambrose and Dolph Ziggler had an entertaining match, as well, with Ambrose picking up the victory.

Roman Reigns and Cesaro, predictably, had a great match also with Reigns coming out on top, but who didn’t see that one coming?

After Raw went off the air, Reigns and Ambrose confronted each other in the ring.

The Divas Champion, Charlotte, and her challenger on Sunday, Paige, took part in a main event contract signing segment, which is awesome. For these women to get that spotlight is something rare, especially before one of the bigger pay-per-view events of the year.

"When my little brother passed away ... you were THERE for me!" - @MsCharlotteWWE #RAW pic.twitter.com/UMgK8UGRHg

Charlotte, surprisingly, invoked her late brother, Reid, who passed away in 2013 due to a drug overdose, and was on the verge of tears during her promo. Paige took advantage of the weakness and the two engaged in a war of words, as is per usual during these types of segments.

"Your little baby brother didn't have much fight in him, did he?" - Paige IT'S ON!!! #RAW #ContractSigning pic.twitter.com/XQNeXXhY7Q

It went off the rails when Paige said that Charlotte’s brother didn’t have enough fight in him. Charlotte then attacked Paige and after they were separated, Charlotte’s theme played as the show went off the air.

It was a very controversial angle to not only show on television, but to be in the main event segment. One has to believe Charlotte and her family gave the OK to use that angle on the air to further push the feud, which was really floundering up until that point. Whether you agree with real-life death being used in a professional wrestling angle or not, the name of the game is to create heat between two wrestlers and get people emotionally invested into the feud. That’s what this was supposed to do.

But there was no shortage of opinions about the angle on Twitter.

Watched Raw with a casual fan tonight. Response to main event: "I feel like those two really hate each other."

Maybe I'm wrong, but I don't think I'm desperate enough for heat in a storyline to view this as good.

She’s basically a rookie being given this for her first ever Raw main event segment. Did she feel she had a choice? https://t.co/7k7ji5qcwz

Reid Flair had never been brought up before so there's no story anyway. It actually makes me want to watch that match less now. Horrible.

This honestly might be the most stupidly hypocritical thing WWE has ever done.

If WWE did an angle where two wrestlers just wanted to know who was better in the ring...it would sell. IT WOULD SELL.

Jeez. That is awful. As a wrestling fan, I demand more than this. https://t.co/NNbS1M2VzI

I've seen the impossible battle w/ substance abuse. Known people who chose to end their lives. This is not the stuff of wrestling angles.

Do I think the angle went too far? No, and that’s simply because we’ve seen a lot worse in professional wrestling through the years. Should they have had to go that far? Probably not. The feud has been so piss-poorly built that this seemed like a last ditch effort to garner some heat on their upcoming match. It worked. This is what professional wrestling is and always has been. Would I have rather seen a natural progression of the feud that was built by hatred inside the ring between the two? Sure. But, this is also an entertainment show, and that’s why this segment was booked the way it was.

The Brothers of Destruction, Undertaker and Kane, started off the night by coming to the ring with druids surrounding the squared circle. That theme song and entrance never gets old. Ever. Taker threatens the Wyatt Family by saying no one can tame him and his brother, Kane. Kane says they will suffer in the fires of eternal damnation, followed by Taker saying Wyatt’s evil is no match for theirs.

"Bray Wyatt, your evil is no match for ours!" - #Undertaker #RAW #SurvivorSeries pic.twitter.com/6JBzySRH3B

If you’ve followed the careers of the Undertaker and Kane, it’s a good bet that he was right when he said nobody can match their evil. This is why the match Sunday night is so important. The Brothers will face two members of the Wyatt Family, which I think will wind up being Bray and Braun Strowman.

"I AM THE FACE OF FEAR ... I am its Master and Decider!" - @WWEBrayWyatt #RAW pic.twitter.com/Uqp6tJ5w7F

Twenty-five years. Twenty-five years is long enough for an army of darkness according to Wyatt. As he and his family came out on the stage, Wyatt said he’s the new face of fear and will be remembered for destroying Taker and Kane. The druids at ringside then reveal sheep masks and try to attack Taker and Kane in the ring, but they gain the upper hand and send a message to Wyatt.

I didn’t mind this segment, but it was really stupid for the druids to try to attack Taker and Kane. I get the whole mind games aspect, and the fact that they “turned on” Taker and Kane, but I really think the segment fell flat a bit. Maybe it was the crowd. Maybe it was because I was just settling in to watch. I’m not sure. I just think this feud has been a little underwhelming so far.

The New Day celebrated an anniversary of their own born out of their jealousy of 25 years of The Undertaker. Yes, that’s right, it’s been one year since the birth of The New Day. They talked about their displeasure for how nobody was celebrating their anniversary before their six man tag team match against The Usos and Ryback, which they lost via disqualification.

I’m not sure why they had that ending with Ryback causing a DQ , as it just felt weird and out of place.

• Tyler Breeze d. R-Truth by pinfall via the Beauty Shot.

• Six-Man Tag Team Match: The New Day (c-Tag) d. Ryback and The Usos by disqualification after Ryback shoved the referee, getting him team disqualified.

• The Dudley Boyz d. The Ascension by pinfall via the 3D.