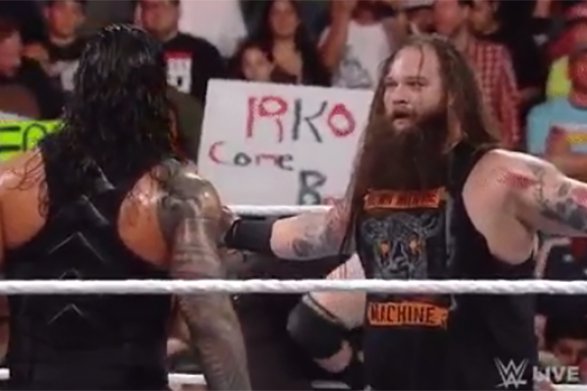 Bitter rivals teamed up on Monday night, but will it be the last time?

The Staples Center in Los Angeles hosted Raw on Monday night, and it was the second straight week that The Authority was nowhere to be found. Shane McMahon was back in charge again, and Raw was actually, dare I say, pretty good again. Is a brand split coming soon? I would welcome it.

The main roster is now overflowing with talent, and when the talent out on the injured list comes back, there are plenty of spots for people if a brand extension were to take place. If not, then many superstars will get released and take their talents elsewhere. I don’t think that’s bad for the wrestling business, but if WWE is trying to utilize all of their talent in a way that’s conducive to growing their audience, a brand extension is the only answer.

Shane McMahon made his way out to the ring for his second straight week in charge of Raw. He ran down a pretty great card, including Charlotte vs. Natalya for the Women’s Title, Sami Zayn vs. AJ Styles, and the beginning of a tag team tournament to determine new number one contenders for New Day’s WWE World Tag Team Championships. However, McMahon was interrupted by Kevin Owens who demanded a rematch for his Intercontinental Championship, which he lost in the Ladder Match at WrestleMania.

The general manager of the night wasn’t about to let Owens dictate his show. He made a No. 1 contender’s match for The Miz’s Intercontinental Title between Owens and Cesaro. Originally, it sounded like the winner would face Miz later on Raw, but it looks like the title match will now take place at Payback on May 1.

Cesaro and Owens had a tremendous match. There’s really no other way to describe it. If you missed it, the video above probably won’t do it justice. I sure hope you DVR’ed it. Cesaro won and is now the No. 1 contender to Miz’s Intercontinental Championship.

He and The Miz got acquainted with each other later in the night.

Styles vs. Zayn, oh my

Earlier in the night, McMahon signed Zayn vs. Styles, and it should’ve really been the main event of the night. If Zayn won the match, he would be inserted into the main event at Payback and make it a Triple Threat match with Roman Reigns defending against Zayn and Styles.

In a phenomenal match that almost saw Zayn paralyze himself by taking a bump directly on top of his head, Styles was able to get the win with the Phenomenal Forearm and not allow Zayn to enter his title match with Reigns at Payback.

Reigns was out for a promo, and uttered the same phrase he’s said since he won the title at WrestleMania: “I’m not a bad guy, I’m not a good guy, I’m the guy.” The League of Nations came out shortly after, I guess so the crowd had no choice but to cheer for Reigns, and they did so once the trio made its way to the ring to attack. The lights went out, however, and the Eater of Worlds made his presence known.

For the second week in a row, the Wyatt Family targeted the League of Nations, in turn helping Reigns, whom they despised months ago. McMahon was digging this, so he put Reigns and Wyatt in a tag team to face Sheamus and Albert Del Rio in the main event.

The awkward team coexisted rather well, though the commentators were quick to point out they still were enemies based on their blood feud they just had not too long ago. They also acted like enemies after the match, staring each other down. While the creative team looks to turn the Wyatt Family face, they’re also looking to turn Reigns heel. They have to know his match against Styles is a no-cheer situation for him, so this might be a different way of getting his character over before that match. Teaming with one of his most bitter rivals? I’ve seen that before. But, for some reason, I think this is unique and it feels a little bit different.

Charlotte defended her WWE Women’s Championship against Natalya, and Dr. Phil made his way down to ringside to do some commentary. Earlier in the night, the doc approached Charlotte backstage and said she needed to leave her father in the dust and she was better than having him follow her around.

Well, the Flair family proved the doc to be a liar. In a great women’s match, that the crowd was very involved in, Ric Flair pulled the referee out of the ring just before Charlotte tapped out at the hands of Natalya’s Sharpshooter. The referee rang the bell, disqualifying Charlotte and giving Natalya the win.

Of course, titles can’t change hands on a disqualification. So Charlotte retained her title, much to the chagrin of Dr. Phil at ringside.

The Bullet Club is here

Luke Gallows and Karl Anderson made their presence felt on Monday night, debuting and attacking The Usos after their match against Curtis Axel and Heath Slater. Despite getting the win to advance in the tournament, The Usos were left lying by the members of New Japan Pro Wrestling’s Bullet Club. Gallows and Anderson even made the Bullet Club symbol, so it’s possible they’ll still use the name in WWE, if WWE was able to gain rights to it. With rumors that Styles and Finn Balor rejoining their former faction, this is an exciting time in WWE, for sure.

So, yeah, there’s a tag team tournament to crown a new number one contender for The New Day. There are a lot of tag teams in WWE today. You might not know because a lot of them just aren’t good. But I have a feeling we’re about to hit a golden age in tag team wrestling, at least in the PG-era WWE.

In other tag team tournament action, the Dudley Boyz defeated the Lucha Dragons, and once again, Enzo Amore and Colin Cassady came out and ran them down. I’m looking forward to the first Dudleys/Enzo and Cass encounter. It should be fun.

Debut of the Ambrose Asylum

Chris Jericho came out for another edition of The Highlight Reel. He had a big special guest lined up, and it turned out to be himself. After some self-adulation, Dean Ambrose’s music hit and he came out with his own plan – he was gonna make this show his.

And so, the Ambrose Asylum was born. And, funny enough, Jericho was Ambrose’s first guest. This didn’t end well for Jericho, who was hit with Dirty Deeds. I dig an Ambrose-Jericho feud.

• Winner faces The Miz for the Intercontinental Championship: Cesaro d. Kevin Owens by pinfall via The Neutralizer.

• Tag Team Tournament First Round Match: Dudley Boyz d. Lucha Dragons by pinfall after hitting the 3D on Sin Cara. Kalisto suffered a neck injury outside the ring and was tended to by the doctor.

• WWE Women’s Championship: Natalya d. Charlotte(c) by disqualification after Ric Flair pulled the official out of the ring while Natalya had Charlotte in the Sharpshooter.