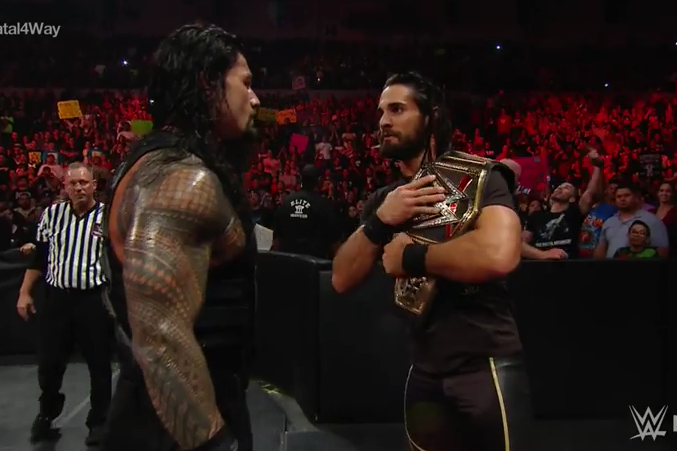 Coming off the heels of a fantastic Hell in a Cell event, the Valley View Casino Center in San Diego, CA was the host for WWE’s Raw on Monday night, and this was actually a really good show. The storylines advanced and made sense, the in-ring action was good, and the main event actually meant something. It’s been a long, long time since we had a main event on Raw that felt that way.

Bray Wyatt explained why he and his family decimated the Undertaker at Hell in a Cell, but he wasn’t done there. The Wyatts targeted another big man to take out indefinitely. Were they successful? Stay tuned.

It’s as if when Raw doesn’t open up with a promo from The Authority, part of WWE dies. I’m assuming that’s what it feels like to them, anyway, because Monday Night Raw opened up with yet another promo from the power couple, along with the man who retained his WWE World Heavyweight Championship against Demon Kane the previous night, Seth Rollins.

It was mostly fanfare for Rollins, but this promo did actually serve a purpose – one that I was actually fine with.

The Authority would announce that the winners of Sunday night’s Hell in a Cell event would compete in a series of matches where the winners of those matches would then compete in a Fatal Fourway main event for the #1 contendership to the WWE World Heavyweight Championship on the line.

Roman Reigns would make his entrance and confront his former Shield teammate and now bitter rival. The two wouldn’t come to blows, and Reigns would have to get ready because he was in the first qualifying match of the night.

Reigns and Kofi Kingston battled in a pretty evenly matched contest. I’m not sure anyone thought Kingston had a chance, but the match was more even than I would have imagined. Reigns got the win and a date in the main event.

The Intercontinental Champion, Kevin Owens, renewed his short rivalry with Cesaro in a qualifying match Monday night, and it just proved why these two need to have an extended feud with some title changes between them. The guys have great chemistry in the ring together, and they’ve never had a bad match. Honestly, I thought Cesaro would win to hopefully re-ignite the feud the two had at the end of summer this year, but Owens winning is a good thing since he’s the champion.

These two need to be in more matches together – and Cesaro should hold a singles title before long. I still don’t count his first U.S. Title reign because it’s seemingly forgettable. See, I bet you forgot he even held the title before you read this.

Alberto Del Rio and Neville had a really good match, with Del Rio coming out on top thanks to the Tree of Woe stomp.

I’m still waiting to hear why Del Rio’s back in WWE, as his promo with Zeb Colter backstage didn’t really answer any questions. But, I’m glad he’s back, because he was an underrated superstar before he was released in the summer of 2014. I hope this run is better than his last.

Even though Tyler Breeze, who made his main roster debut on last Thursday’s SmackDown, was at ringside, Dolph Ziggler was able to defeat Big E to have a chance in the Fatal Fourway main event. Both tag team champions losing isn’t something I’m thrilled about, but I’m going to let this slide since there was more to the storyline with Ziggler winning.

But, can’t forget about the little things. Big E is a master. Not to mention Kingston and E gave their bro a shoutout at the beginning of the program.

Best. Tag. Team. Ever. In the last five years…?

.@WWERollins is ringside to see who his next No. 1 Contender will be. The #Fatal4Way is LIVE NEXT on @WWE #RAW! pic.twitter.com/b15G9y6NFb

Rollins joined the commentary table for the main event, which was the perfect touch. This main event was off the hook. It’s been what feels like forever since we saw a main event that had that much angst throughout as a viewer. The spots were smooth, the story throughout the match was very well done, and the ending sequence was about as good as you can get.

Will some people get up in arms over Reigns pinning Owens? Probably, but I’m not one of them because that main event made everyone look golden even in defeat.

Reigns and Rollins stared each other down after the match and Reigns patted the title, which was over Rollins’ shoulder, as if to tell Rollins to enjoy the title while he can, because it’s finding a new home soon. Like I said before, it’s all about the little things.

Bray Wyatt addressed why he and his family took out the Undertaker after his match with Brock Lesnar at Hell in a Cell Sunday night.

“For 25 years, the Undertaker has walked among the darkness and the light. He had no equal. They all feared him. Grown men would tremble at just the sound of his name. But last night, the apocalypse showed its face. Destruction, desolation, vengeance and fear rode to him and then they carried out the soul of the mighty Undertaker.

"Now can you feel it? Can you feel that? That wicked, wicked horrible feeling is in the air tonight! Can you feel it!? Last night was war. Red horse of the apocalypse, Hell in a Cell type of war and I just wanted to make something very, very apparently clear tonight. Roman Reigns – understand that one day you and I, we will dance again, but not until I am properly revitalized. And that is why last night the demise of the Undertaker has become my resurrection!

"And believe me, you can’t understand, but once you’ve had a taste of that kind of power, that is consumes you. It becomes you. There is no turning back. You are now addicted! And that is why right now, as I’m speaking, I am feasting on the soul of the Undertaker and I want more! I have to have more! I need more! And I will not stop until there is nothing left of the Undertaker – until he is just a distant memory, forgotten and lost, bones on the ground as I ascend to my throne!

Right now, somewhere, the Undertaker’s soul is being ripped to shreds. Desecrated, piece by piece and bit by bloody bit. So tonight, I wanted to ask something of you. I would like to ask everyone in this entire arena to bow their heads. I want to ask everyone that is watching at home to place their hand on their television set. And tonight, I want you to share a moment of silence with me for the man who has lost his soul – to me. Rest in peace, Phenom.”

Kane’s pyro hit and the Demon entered, with nothing but destroying Wyatt on his mind. Unfortunately for him, the Wyatt Family showed up and decimated the Big Red Monster, carrying him out ala his big brother the night prior. The Wyatts are looking strong here, but I ultimately think it means they get beaten at Survivor Series in a classic Survivor Series match – if that’s where this story is going.

As for why Wyatt is targeting Undertaker again – who he lost to at WrestleMania earlier this year – is still anyone’s guess. Is this revenge for WrestleMania? Are we supposed to forget they had a match? I surely hope not.

But hey, at least we got Wyatt singing “He’s Got the Whole World in His Hands” again!

Let’s hope the unnecessarily added layer to the Paige storyline is over. After officially reuniting as Team P.C.B., the team of Paige, Charlotte and Becky Lynch lost to Nikki, Brie and Alicia Fox on Monday night. After the match, Paige attacked Charlotte while she was trying to help Becky up, and then attacked Becky. She slapped on the PTO to Charlotte, and now we finally have our next feud for the Divas Championship.

This whole angle reminds me of when Randy Orton returned after being destroyed by The Authority, only to rejoin the group just to try to play mind games with Rollins back in February and March. It made completely no sense at the time, and that’s how I feel this angle with Paige and Charlotte has played out so far. Let’s hope the ridiculousness is over.

The Miz will be on ESPN’s SportsCenter on ESPNews at 9 p.m. tonight. Every Tuesday night, a new WWE superstar will be interviewed in a segment with former WWE announcer and current ESPN anchor, Jonathan Coachman.

• Sheamus/Rusev/King Barrett d. Ryback/Dudley Boyz by pinfall via a rollup by Barrett on Bubba Ray.