WWE Raw roundup: Shane takes a huge leap as we head to WrestleMania 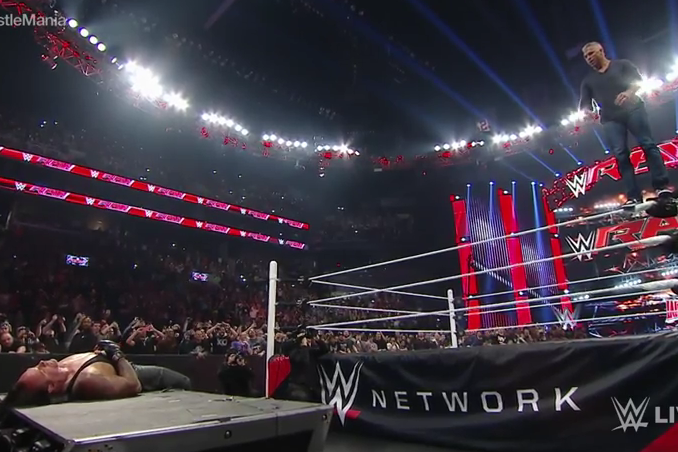 Shane McMahon and The Undertaker couldn’t wait until Sunday to get an edge on each other.

The last episode of Raw before WrestleMania this Sunday came to us from the Barclays Center in Brooklyn, N.Y. Monday night. Because of the timing, this is one of the biggest Raw's of the year and we were hoping to see a good show to allow us to look forward to WrestleMania after the snoozefest we witnessed in Philly last Monday.

I don’t think this show was leaps and bounds better than last Monday’s show, but it was better. The opening segment was hot and, at least, the ending segment wasn’t a tug of war with the WWE World Heavyweight Championship belt. That’s a positive. And hopefully, we’ll see more positives this week heading into WrestleMania on Sunday.

Here are some of the main stories coming out of this go-home edition of Raw:

The Undertaker opened up Raw with a promo saying that this WrestleMania won’t be his last and the blood of Vince McMahon might be on his hands.

Shane countered a Last Ride attempt from Undertaker on the announce table and clocked him over the head with a box from under the ring. The Undertaker laid motionless on the table and Shane went in for the kill and hit a flying elbow drop from the top rope onto the table.

Shane got up and walked towards the backstage area, and Undertaker sat right up. This was really good build for the match, and I’m looking forward to this match the most on Sunday. I just can’t tell if that’s sad.

Later in the program, Shane confronted his father backstage and said he was going to take 40 years of mental and physical anguish from his father into Hell in a Cell and take control of WWE.

The time for talk is over

Triple H gave another long-winded promo in the ring, but it was nice to see him address what happened at TLC back in December when Reigns completely destroyed him as being the reason he came back and took Reigns' title at the Royal Rumble.

Roman Reigns interrupted the promo and just ran into the ring and we had ourselves a nice little brawl for the third week in a row. Triple H was able to retreat with Stephanie and it looked like he was hightailing it out of the arena.

Later, Reigns was getting set for a backstage interview with Renee Young before Bubba Ray Dudley interrupted and kept shouting at him. Reigns went up to confront him, but D-Von Dudley appeared and Reigns threw the first punch. Triple H re-appeared and joined in on the beatdown, saying Reigns would never win the title again before leaving him lying.

But he wasn’t done. The main event of the evening was Triple H and Stephanie coming back out to the ring to finish what was interrupted earlier in the night. And he was interrupted again.

This time, the roster emptied out of the locker room to try and pull Reigns and Triple H apart. It was a nice visual, but even this pull-apart brawl was kind of met with a lukewarm response because of how bad the buildup has been so far. It’s not like the story is bad, it’s just that WWE is completely ignoring the crowd response and not making any changes in Reigns’ character at all. He’s still the same guy. And that’s a problem.

The Beast was in the house in Brooklyn, but Dean Ambrose continues to just be more awesome than words can explain at this point. After Paul Heyman sold us all once again on the No Holds Barred Street Fight between his client and Ambrose at WrestleMania, the Lunatic Fringe entered the arena with a red wagon by his side. No, really.

Ambrose picked up a bunch of weapons from under the ring without looking in the ring once. He made his way to the back, but came back and put in the top half of the steel steps in the wagon before leaving. It’s not huge, but it’s great. It’s perfect for his character and I think this match will be one of the best on the card.

Styles and Jericho to clash at WrestleMania

Add another match to the WrestleMania card, as Chris Jericho accepted AJ Styles’ challenge after Styles distracted him at ringside, which led to Zack Ryder pinning Jericho with a small package. Jericho attacked Ryder after the bell with a Codebreaker and went nuts on a steel chair outside the ring. Jericho accepted Styles’ challenge, but it doesn’t look like there will be a stipulation added to the match. As the fourth match in the series and what should be Styles’ triumphant win, this match should carry some sort of stipulation. Maybe it’ll be added this week, or even on SmackDown Thursday night. We’ll have to wait and see.

ESPN is coming to WrestleMania

Jonathan Coachman made a cameo after Kofi Kingston defeated Alberto Del Rio in a match previewing The New Day vs. League of Nations match on Sunday. The Coach, in his return to WWE television after leaving the company to become a broadcaster at ESPN, announced that SportsCenter will have coverage of WrestleMania this week on ESPN stations.

For weeks on end, it was believed ESPN wouldn’t be providing any coverage on their stations of WrestleMania despite having coverage of WWE’s big events. Luckily, they’ve made a smart decision and will be in Dallas this weekend bringing some live look-ins to WrestleMania 32.

It was time for a party.

To all the people who watch ESPN for the sports, you’ll probably be so angry. You’re welcome.

Let’s not forget, though. Booty O’s are the official cereal of WrestleMania 32.

Kane and Big Show - from enemies to partners in one week

After Kane chokeslamming Big Show off the middle rope last week in Philly, the two teamed up against the Social Outcasts and pretty much every other superstar that seems likely to make an appearance in the Andre The Giant Memorial Battle Royal at WrestleMania. Make sense? Not really. But the segment seemed to be randomly thrown together for the second week in a row, so it’s pretty clear there’s not much thought behind this match, so don’t look for anything exciting like we saw two years ago with Cesaro winning and even last year with the eventual split of The Miz and Damien Mizdow.

Eva Marie returns and gets the Roman Reigns treatment

The crowd was less than pleased to see Eva Marie’s return to the main roster, although she was actually helping out the babyfaces in the ring after Emma pinned Paige with help from Lana. That didn’t matter to the crowd. They clearly don’t like her and even after a lengthy absence from the main roster, the crowd still doesn’t like her.

Before Raw took the air, WWE announced Snoop Dogg would be inducted into the celebrity wing of their Hall of Fame Class of 2016.

The Warrior Award is given to a person each year who exhibits unwavering strength and perseverance and embodies the indomitable spirit of the Ultimate Warrior. Breast cancer survivor, Joan Lunden, will be given the award at the Hall of Fame ceremony on Saturday night.

Speaking of the Hall of Fame ceremony, I’ll have a brief summary of all of the inductees right here early Sunday morning. I’ll also have an in-depth review of NXT TakeOver: Dallas from this coming Friday night, as well. Stay tuned here for all of your WrestleMania weekend news.

• Zack Ryder d. Chris Jericho by pinfall via a small package. Jericho attacked Ryder after the match and hit him with The Codebreaker.

• Big Show and Kane d. Curtis Axel and Bo Dallas by disqualification after the Social Outcasts ran in. The ring then filled up with a bunch of superstars, ostensibly participants in the Andre The Giant Memorial Battle Royal, fighting each other.

• Emma d. Paige by pinfall after Lana interfered and hit Paige with a kick to the head when the referee’s back was turned.