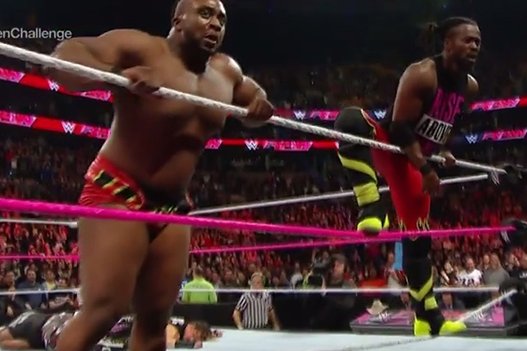 Big E may have lost to Cena, but The New Day had the last laugh Monday Night.

WWE invaded Boston’s TD Garden for Raw on Monday night, and the road to Hell in a Cell was in full swing. We’re three weeks away from the event and we’ve got more matches that were added to the card that to me looks fantastic on paper. This includes a Divas Championship match, a WWE World Heavyweight Championship match with a very interesting stipulation, and two Hell in a Cell matches.

It’s looking good so far. Unfortunately, at least on social media, the night was marred by some controversy started by a former WWE superstar.

Former WWE wrestler and future UFC fighter, C.M. Punk, lit a fire amass Twitter moments before John Cena and Roman Reigns were shown in the ring with breast cancer survivors and hyping the Susan G. Komen foundation. Unfortunately, that seemed to overtake a lot of social media talk over the course of Raw, but it wasn’t unexpected. I’m sure we’ll be hearing a lot about this in the coming days – maybe not so much in the mainstream, but on social media. But that’s a story for another day. Let’s get to what happened in [and out] of the ring on Monday night.

"One of you will walk out (of #WWEHIAC) the VICTOR! ... The other won't walk out AT ALL!" - @HeymanHustle #RAW pic.twitter.com/WRZV0hbuhZ

He did it again. Paul Heyman is a legend on the mic, and he proved why he’s the best promo in the business again on Monday night. Kicking off the show with him and Brock Lesnar in the ring, Heyman directed his words at The Undertaker, who Lesnar will face inside a Hell in a Cell in three weeks.

Big Show, who was destroyed by the Beast Incarnate on Saturday night at Madison Square Garden, came out and offered a handshake in a show of respect, which Lesnar denied. He then spoke a little too much, and ran into a flurry of suplexes and eventually an F5 before Lesnar was finished.

This had an effect on the night’s big tag team encounter, as Big Show was supposed to team with the WWE World Heavyweight Champion, Seth Rollins, to take on the Dudley Boyz. During a promo by Corporate Kane, he deemed himself willing and ready to be Rollins’ partner in the main event. Rollins came out and confronted Kane, which is basically the same thing we've seen the last few weeks.

This brought out Stephanie McMahon, who basically forced Rollins to team with Kane against the Dudleys. She then made the match official between Rollins and Demon Kane for the WWE World Heavyweight Championship at Hell in a Cell. She added the stipulation that if Demon Kane doesn’t win the championship from Rollins, then Corporate Kane would be relieved of his duties as director of operations.

I like the match and the storyline makes sense, but instead of having Reigns and Wyatt inside the Cell, why not have Rollins and Demon Kane? That makes more sense to me, and having three Cell matches at the event is way too oversaturated. I’d rather they save Reigns and Wyatt for Raw the next night or an upcoming Raw inside a steel cage, instead of the Cell.

.@WWERollins just HANDCUFFED the injured #CorporateKane to the ropes, to prevent him from leaving! #RAW pic.twitter.com/5H1pULkoQM

As for the tag team match, Rollins would handcuff Kane to the ring post after he re-injured his foot, but those cuffs were none too strong, as Rollins’ momentum from a slingshot suplex by Bubba Ray would break the handcuffs and Kane would land on the floor. The doctor would help Kane to the back, but he looked back at Rollins in the ring and smiled, just exactly like we saw on SmackDown.

The match ended in a disqualification due to Rollins kicking a table into the Dudleyz, who were trying to bring the table into the ring. Kane came out as the Big Red Machine, but walked into a 3D from the Dudleyz, which was payback for Kane’s attacks from them on last Thursday’s SmackDown. Rollins, who at first walked away, decided he wanted to put the monster through a table.

That wasn’t before he decided to verbally harass the unconscious Demon, who would awaken and chokeslam the champion through the table, which pretty much everyone saw coming.

At least that’s what should have happened and this feud, which shouldn’t even be happening, is moving swiftly enough to hopefully come to an end at Hell in a Cell with Rollins retaining his title. But this begs the question – when will Rollins get his heat back… and keep it?

I hate Stephanie McMahon, the character, who continues to emasculate each and every superstar on the roster. It legitimately squashes what any wrestler has.

So, I guess it was a good thing? The New Day answered Cena’s U.S. Open Challenge after taking out Dolph Ziggler, whose music hit but never showed until the trio drug his lifeless body out to the stage.

Big E would be the guy to challenge Cena for his title, and give the champion quite a fight. Cena would win in the end, but the Tag Team champions would attack him afterwards. Ziggler tried making the save to exact some revenge on his attackers from earlier, and would wind up superkicking Cena accidentally.

The Dudleyz then ran down to get some of The New Day, but would get decimated by the champions. The New Day really had their coming out party as serious athletes on Monday night and not just a joke. This was something that was long overdue and we finally got it. The New Day is here to stay.

Natalya scored a somewhat surprising win over Paige on Monday night in a relatively short match. Nothing spectacular here, but I’m really surprised Natalya picked up the win with a submission victory. Paige’s heel turn has been forgotten about, and she’s not looking like a contender for the Divas Championship at all.

Another six-woman tag team match followed in the second Divas segment of the night. Why not just have two singles matches for once?

Summer Rae proposed to Rusev. He said yes, but then said not yet. He said they must prove to each other that they are worthy of each other and said he wants gold around his waist, and then Summer Rae’ll get gold around her finger. An interesting little twist to the storyline, and hopefully this means the end for the Ziggler-Rusev feud.

• Roman Reigns, Dean Ambrose and Randy Orton d. The Wyatt Family by pinfall after Reigns hit Harper with the spear.

• Natalya d. Paige by submission via the Sharpshooter.

• Non-Title: Kevin Owens (c-IC) d. Sin Cara by pinfall via a pop-up powerbomb. He then attacked Kalisto, but Ryback made the save.

• The Dudley Boyz d. Seth Rollins and Kane by disqualification after Rollins dropkicked a table into the Dudleyz.