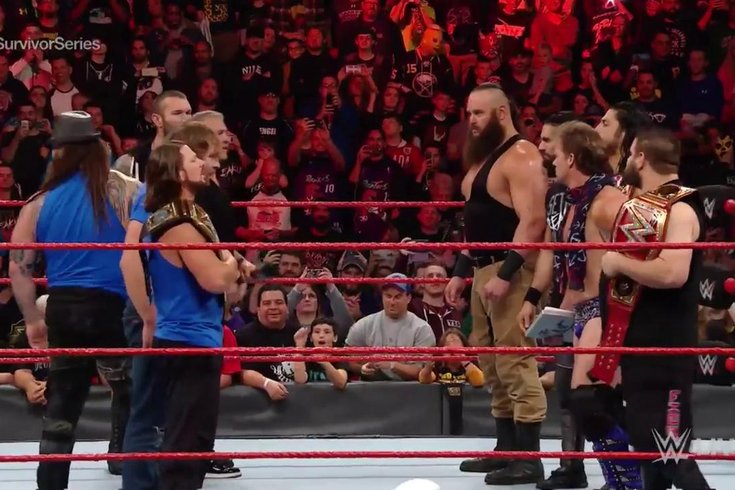 Members from Team Raw and Team SmackDown confronted each other Monday night in Buffalo.

WWE began a week of counting down to Survivor Series on Monday night, beginning with Raw, emanating live from the KeyBank Center in Buffalo, N.Y.

Both SmackDown commissioner, Shane McMahon, and general manager, Daniel Bryan, were on hand for Raw on Monday night, despite getting ready for Tuesday night’s 900th episode of the blue brand they represent. The main event started out very bleak, but it quickly turned around.

The push to Survivor Series was in full-throttle mode, and that made for some very entertaining moments on Monday night. Here are some of the main stories coming out of Raw:

Can’t we all just get along?

In advance of the Raw vs. SmackDown war set to occur this Sunday night, Raw general manager Mick Foley and Raw commissioner Stephanie McMahon wanted to bring some peace to their roster one week after letting them let go of all their tension on one another. After the Fatal Five Way main event last Monday night in Glasgow, the Raw Powers That Be wanted them to come together. So they did something about it.

WWE Universal Champion, Kevin Owens, and WWE United States Champion, Roman Reigns, were forced to team up to take on a tag team that already doesn’t like each other, Cesaro and Sheamus. Reigns and Owens wound up winning the match after Reigns hit Sheamus with a Superman Punch and, being the good tag team partner he is, drug Owens’ limp body – who had just been hit by Sheamus’ Brogue Kick – over for the cover and the win.

In another match, Raw Tag Team Champions, The New Day, took on Chris Jericho, Seth Rollins and Braun Strowman. Strowman hit Xavier Woods with a running powerslam to get the win for his team, but Rollins and Jericho had words after the match which results in a pedigree for Jericho’s troubles.

Before the match, however, Jericho offered Rollins and Strowman a sign of peace by gifting them some ugly-looking scarves. That didn’t sit well with either of them.

Alicia Fox and Nia Jax also teamed up together to face the WWE Women’s Champion, Charlotte, and her arch rival, Sasha Banks in tag team action. Bayley was on commentary during the match. Charlotte and Banks had their problems during the match, but worked together in the clutch and got the win after Banks made Fox tap out to the Bank Statement.

And in the final match of the night, Enzo Amore and Big Cass teamed up with Luke Gallows and Karl Anderson to take on the Shining Stars and Golden Truth. Gallows and Anderson hit the Magic Killer for the win, but teased tagging in Amore so he could hit the BadaBoom Shakalaka. Gallows laughed it off after the tease and got the pin for himself.

In the night’s main event, Foley and McMahon were in the ring with SmackDown’s commissioner [and Team SmackDown Live member on Sunday], and general manager. The predictable war of words began and escalated until Foley and Stephanie called out their team to confront Shane and Bryan.

But they weren’t alone. They called in their guys from the crowd, and they obliged. AJ Styles, Dean Ambrose, Randy Orton, Bray Wyatt and even James Ellsworth, Team SmackDown’s mascot, showed up. Then things got good.

I liked the brawl at the end of the show. It was very entertaining following a promo where it was losing interest very quickly. Of course Team Raw came out on top – it’s their show. I don’t think they win Sunday night.

For the first time since their match was made official for Survivor Series, Brock Lesnar and Goldberg came face-to-face on this edition of Raw. Before the confrontation, Foley made sure to have extra security in the ring, half of their wall facing Lesnar and half facing Goldberg.

How long did you think that lasted? Yeah, not too long.

Heyman kept referencing Goldberg’s wife and son, to which really steamed up the big man. Goldberg said to keep his family out of it, but Heyman just couldn’t help himself. He said Lesnar would make Goldberg so unrecognizable that Goldberg’s son will call Lesnar “daddy.” That’s when Goldberg flipped out and basically got rid of all the security himself. Lesnar walked away, but this did a great job in hyping the main event for Survivor Series.

Brian Kendrick addressed the cruiserweights in the locker room by saying he wants to save all of them, and that he’ll do just that Sunday when he faces Kalisto for the WWE Cruiserweight Championship. The Cruiserweight division is on the line, and if Kalisto wins, the entire division will be moving to SmackDown on Tuesday nights.

Kendrick would battle Sin Cara on Monday night in a non-title bout, defeating him using the Captain’s Hook submission.