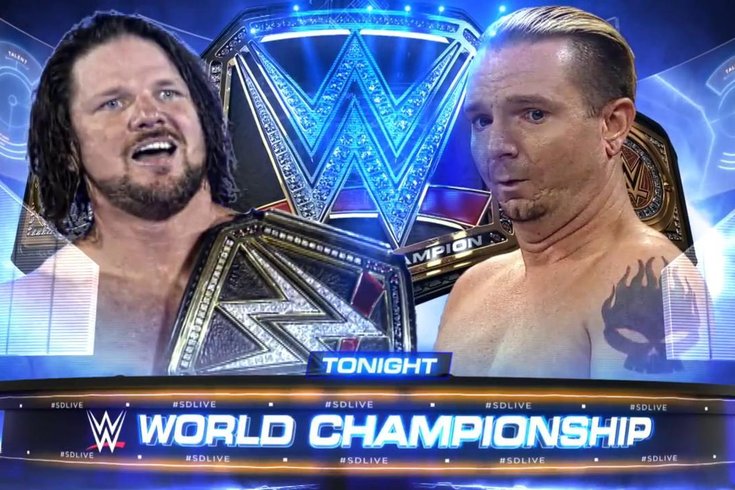 For the second night in a row, WWE invaded the Pepsi Center in Denver on Tuesday for a live edition of SmackDown. James Ellsworth, who defeated the WWE World Champion, AJ Styles last Tuesday – with a bit of help from Dean Ambrose – would get his first shot [and maybe only shot] at WWE gold as he and Styles would go one-on-one again.

While that seemed to distract Styles during the match, he handled Ellsworth with ease. At one point, Ellsworth escaped a reverse chin lock, which garnered a big pop from the crowd, given Ellsworth’s lack thereof of a chin. After Styles was distracted once again by Ambrose, Ellsworth hit a superkick to Styles’ jaw, but only got the two-count. Styles began pummeling Ellsworth and wouldn’t stop even after the referee hit the five-count, resulting in a disqualification and another win for Ellsworth over the champion.

On Talking Smack after SmackDown went off the air, general manager Daniel Bryan made the non-title match official for next Tuesday in Green Bay as Styles will be facing Ambrose one-on-one once again. If Ambrose wins, he’ll get a future title match. And if Ambrose wins, that means Styles will have lost three matches in a row on SmackDown.

In a continuation of last Tuesday’s fireworks, WWE Intercontinental Champion Dolph Ziggler would team with the SmackDown Tag Team Champions, Heath Slater and Rhyno, to take on The Miz and The Spirit Squad [Kenny Dykstra and Mikey Mondo] in six-man tag team action.

It was a pretty good match, but I was thoroughly surprised when Dykstra got the pin on Slater. Due to that, I can see a possible Slater/Rhyno vs. Spirit Squad match for the tag titles in the near future. Is it possible we can see the Spirit Squad win the SmackDown Tag Team Championships before American Alpha?

Carmella wasn’t in a mood to mince words on Tuesday night, calling out Nikki Bella for being where she is because of her real-life boyfriend, John Cena. Bella countered Carmella’s argument, saying she’s worked for everything she’s achieved in WWE and in life, but The Princess of Staten Island wasn’t having it. Carmella wound up showing a video package of Total Divas and Total Bellas clips showing Bella’s “total need freak” with Cena.

The Orton-Wyatt feud may have officially jumped the shark

Bray Wyatt introduced a casket on Tuesday night before Randy Orton took on Luke Harper one-on-one in the opening match of the program. The casket made its way to ringside along with Wyatt during the match, but it turned out to not only be a ploy for Wyatt to use against Orton. Wyatt interfered to cause the disqualification, but Kane appeared in the casket to even the odds and help Orton against Wyatt and Harper.

The Wyatt’s video promo came on and they were gone in a matter of seconds.

Did Curt Hawkins debut this week?

Curt Hawkins was scheduled to make his in-ring debut [or re-debut even though WWE wants you to forget he was in the company before] against Apollo Crews, but, of course, that didn’t happen. Hawkins’ debut has been teased for weeks, and now it just seems like they’re postponing his debut much like they did with Eva Marie’s the first few weeks before she got suspended.

As Hawkins entered the ring, he grabbed the mic and said Crews would have to change his name to Apollo Lose. He suffered a right hand to the kisser for that one and decided to leave the ring. No match for Hawkins… again. Technically, Hawkins should have lost by forfeit, but I don’t think we’ll be seeing that in the history books.

Another wasted segment for Apollo Crews, as well. I have no clue what WWE is doing with him, but they better give him something quick. He’s too good to waste away each week like he has since SummerSlam.

• Randy Orton d. Luke Harper by disqualification when Bray Wyatt interfered. Kane appeared in Wyatt’s casket to even the odds, but eventually Wyatt and Harper disappeared.

• Six-Man Tag: The Miz/Spirit Squad d. Dolph Ziggler/Heath Slater/Rhyno via a rollup after The Miz hit Slater with a fist from the outside, allowing Kenny Dykstra to roll him up.

• Baron Corbin d. Jack Swagger by pinfall via the End of Days.