WWE SmackDown: John Cena returns in one of the best shows of the year 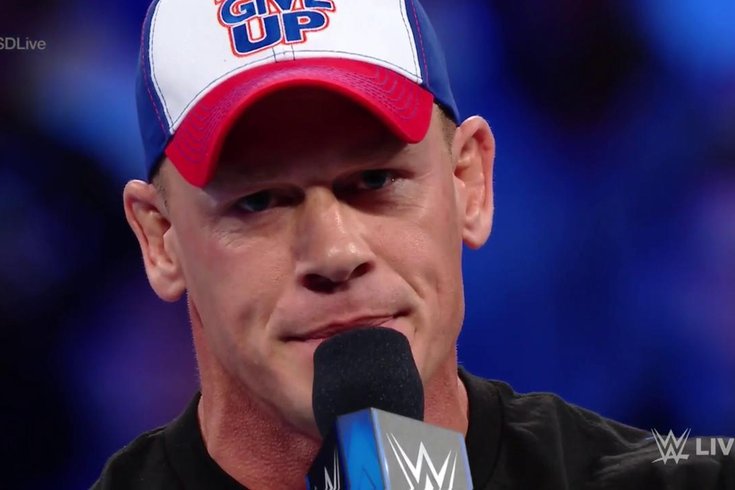 John Cena returned to WWE on Tuesday night and had a clear cut message for the WWE Champion.

WWE invaded the Allstate Arena in Chicago for the second time in 24 hours on Tuesday night, though the superstars were a bit different as it was SmackDown’s turn to leave the Chicago faithful with some hope heading into 2017. This SmackDown show was stacked with three title matches and the return of John Cena to television after months away, which on paper already sounds a hell of a lot better than what Raw gave us on Monday night.

And it delivered. Oh, man, did it deliver! There’s something to be said for feeling the excitement on Tuesdays heading into SmackDown, discussing the show on social media, and then writing about it after it goes off the air. SmackDown gets it. It’s a pro wrestling show. It’s not a three-hour chore to sit through like Raw is. Everything makes sense and the show flows smoothly unlike any WWE program has in as long as I can remember. Tuesday night’s show was a candidate for best WWE television show of the year. What a way to end the year.

John Cena is back … and has sights set on some gold

John Cena returned to a raucous reception in Chicago, and I’m sure he’s missed the hell out of it. We’ve rarely ever seen a wrestler not get fazed at all by the crowd reactions, but Cena’s one of the best. He even tried to invoke the Cubs’ World Series Championship to get on the crowd’s good side, ostensibly, but he was booed mercifully as most of the people in the crowd were fans of the White Sox. Good stuff.

Cena then turned the promo into one of the more intense ones he’s given, saying he’s tired of hearing about the “New Era” and that his time is still now. He said he wanted to challenge the winner of the night’s Triple Threat Match for the WWE Championship at the Royal Rumble and then left the ring. I guess he was already penciled into the main event despite not being seen on television since October.

Who walked away from SmackDown the WWE Champion?

In the night’s main event, AJ Styles defended his WWE Championship against Dolph Ziggler and Baron Corbin in a Triple Threat Match. And, man, was this worthy of a pay-per-view main event!

Corbin may have had his biggest match of his career on Tuesday night, despite his blown spot of saving Styles from a pin attempt off a Ziggler superkick, forcing Styles to kick out.

In a fantastic spot, Corbin hit the End of Days on Styles as Ziggler hit the Zig Zag on Corbin from behind.

All of the players involved in this match brought it and, after the terrible Raw show we were given on Monday night, really made us forget all about that abomination.

Corbin’s breakout match saw him protected a bit as he didn’t eat the pin and he hit Ziggler with the End of Days before being hammered with the Phenomenal Forearm by Styles, who then pinned Ziggler to get the victory. Yes, Corbin’s finisher actually won the match for Styles.

After Styles’ win, Cena hit the ring and the two stared each other down before Cena extended his hand for a respectful handshake. Styles thought about it for a few moments, laid the title down on the mat as if it was the proverbial line between him and Cena, and then shook Cena’s hand.

In perhaps the most surprising match of the night, the SmackDown Tag Team Championships were on the line in a Four Corners Elimination match. Bray Wyatt wouldn’t be in action, as Luke Harper and Randy Orton would defend the titles against American Alpha, The Usos and Heath Slater and Rhyno.

It was a very good opening match and had a pretty surprising ending.

• Jimmy Uso eliminated Heath Slater/Rhyno by pinfall after hitting Slater with a superkick.

• Chad Gable eliminated The Usos by pinfall after Gable rolled up Jey Uso.

• Gable eliminated Harper/Orton by pinfall after a miscue between Orton and Harper led to American Alpha hitting Grand Amplitude on Orton.

Your NEW SmackDown Tag Team Champions: American Alpha! I’m not sure if anyone really expected this title change to take place, but I don’t mind that it did. It gives us two fresh storylines right out of the gate in Harper/Orton and what role Wyatt plays, and American Alpha defending the titles against, hopefully, The Usos. They haven’t exactly had a proper feud yet and deserve to show off the kind of matches they’re capable of.

As for the timing? I honestly thought they’d wait until WrestleMania to put the belts on Jordan and Gable, but WWE clearly wanted a big moment on SmackDown, and it happened. Sure, there was no buildup and what has American Alpha really done the last few months? Hopefully, this is the beginning of their ascent to the top of the entire main roster tag team division.

After the match, Harper and Orton argued in the ring while Wyatt tried to keep the peace. It looks like the Orton split from the Wyatts is happening sooner rather than later.

I’d been looking forward to this match the most heading into Tuesday night. Alexa Bliss has been on fire as of late, and Lynch is a good choice to chase the title and, hopefully, win it back in the future. These two had another really good match, complete with a “What the hell!?” moment when Lynch locked in the Dis-Armer and it actually really looked like she disarmed Bliss:

Of course, Bliss could be double-jointed, considering the match wasn’t stopped immediately.

As the referee was tending to Bliss, La Luchadora got on the ring apron to distract Lynch, and then was able to grab her and smash her face into the exposed area of the turnbuckle. Bliss capitalized by hitting a DDT and pinned Lynch to retain her championship. It was brilliant for Bliss to use La Luchadora against Lynch, who was under the mask just one week ago as she defeated her.

Bliss sold her arm injury a little bit, but it doesn’t look like she was seriously injured.

Dean Ambrose gets his hands on The Miz

I love how The Miz refused any interviews from his humungous looking locker room unless it was Renee Young, who slapped him last Tuesday after he made comments about her and her real-life boyfriend, Dean Ambrose.

Young eventually would head to Miz’s locker room for an interview, but it didn’t last long as Ambrose, who was dressed in a security outfit, got next to the Intercontinental Champion and proceeded to attack him. Ambrose got the better of the other security guards, but Miz scurried off.

What’s going on with James Ellsworth and Carmella?

It seems like Carmella has moved on from Nikki Bella, at least for now, and has her sights set on James Ellsworth. But why? She gave us an answer during a backstage promo, simply saying, “I find James Ellsworth uniquely attractive.” The two then left together. I’m almost kind of interested in seeing how this angle pays off. Almost. [I mean, I know she’s likely using him for something and his character is a guy who isn’t in touch with reality, but… I digress.]

• SmackDown Women’s Championship: Alexa Bliss (c) d. Becky Lynch by pinfall after Bliss hit Lynch with a DDT after a mystery La Luchadora came down to the ring and smashed Lynch’s head into an exposed turnbuckle.

• Triple Threat Match for the WWE Championship: AJ Styles (c) d. Dolph Ziggler and Baron Corbin after hitting the Phenomenal Forearm on Corbin, then pinning Ziggler, who Corbin hit with End of Days moments before.

• Tony Nese w/ Drew Gulak d. Cedric Alexander w/ Alicia Fox by pinfall after hitting him with a palm strike. The referee ejected Fox from ringside after Gulak blamed her for fictitiously attacking him, in turn distracting Alexander and allowing Nese to hit a palm strike for the pin.

Backstage, Noam Dar approached Fox with mistletoe and was smacked not once, but twice.

After the match, Ali said it was good to be in his hometown of Chicago. He then got real for a moment and said that at even though people make assumptions about him because of his name and his appearance, the WWE Universe lets him know just how much he’s liked.

• Jack Gallagher d. Ariya Daivari in a Gentlemen’s Duel after Daivari forfeited by walking away.

• Neville d. Rich Swann (c) in a non-title match by pinfall after hitting Swann with a superplex off the top rope. After the match, Neville continued to attack Swann and left him lying in the ring after superkicking him in the head.

"BRING ME MY CROWN!" Statement made by @WWENeville... #205Live pic.twitter.com/4cY3HwfLln