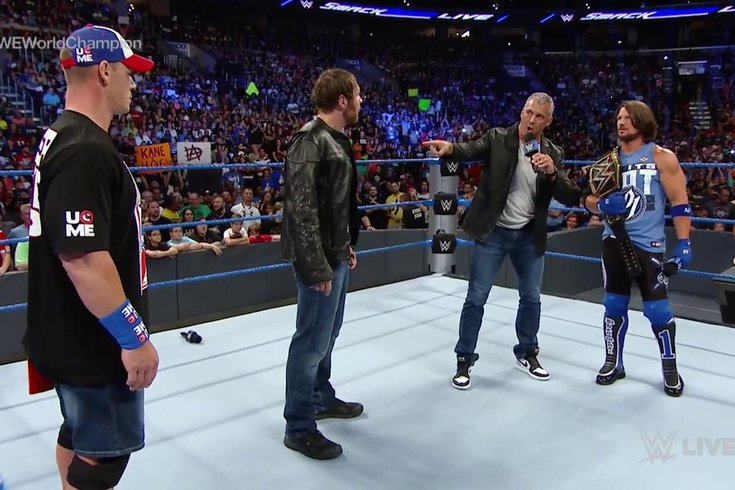 The SmackDown commissioner made the main event for No Mercy on Tuesday night, and it includes some familiar faces.

Just 24 hours after throwing out the first pitch at the Phillies game, SmackDown general manager Daniel Bryan and his Tuesday night crew headed to the Wells Fargo Center here in Philly for their first television show since their big debut Backlash pay-per-view on Sunday night.

There were many questions I had going into SmackDown on Tuesday night, and a lot of them were answered. However, this seems like the same cookie-cutter type of written show we’ve come to see through the years in WWE. A tag team main event, no titles defended [and if there was a title defense, it was a joke of a defense].

Dare I say the program was … boring? Let me know what you guys think. Here’s what went down on Tuesday night:

The road to No Mercy begins

The New Face That Runs the Place – I’m assuming we’ll capitalize that from now on – began the program with a promo on how he told all of us he’d become the WWE World Champion this past Sunday at Backlash against Dean Ambrose.

The Former Face That Runs the Place, if that makes any sense at all, made his return to SmackDown after not appearing on WWE television since SummerSlam. John Cena challenged Styles for his WWE World Championship almost immediately, despite him losing two huge matches against him this summer. He said his goal was to tie Ric Flair and become the 16-time World Champion.

What a feat that would be.

But the former WWE World Champion wasn’t going to remain quiet. Dean Ambrose made his way to the ring and demanded a rematch, as is the case with most former champions and their rematch clauses. Ambrose insulted Cena by calling him a part-timer who wasn’t even good in the ring anymore, and Cena lit up Ambrose with words of how

The commissioner of SmackDown, Shane McMahon, made his way down to the ring and wound up making the main event for SmackDown’s next pay-per-view, No Mercy, which takes place from the Golden 1 Center in Sacramento, Calif. on October 9. We’ll see a Triple Threat Match which will pit Styles defending his title against Cena and Ambrose.

Styles teams up with… James Ellsworth?

After making the main event of No Mercy official, the SmackDown commissioner wasn’t done yet. He booked the main event of the show, as well, in which Cena and Ambrose teamed up to face Styles and a partner of his choosing. Despite trying to find a partner himself backstage most of the night, Styles had no luck, getting stuck with infamous jobber James Ellsworth as his appointed partner by Bryan.

But Ellsworth wouldn’t have his chance to shine in the spotlight again. During his ring entrance, he was attacked by The Miz, who avoided any physical contact with Dolph Ziggler earlier in the night. The Miz wound up disposing of Ellsworth rather easily and took his place as Styles’ partner.

That didn’t go too great for the duo. They would lose the match after Cena hit the Intercontinental Champion with the Attitude Adjustment for the win.

Ambrose saw the after-match celebration as the perfect time to strike, and he hit Cena with Dirty Deeds out of nowhere. It doesn’t sound quite as cool as RKO out of nowhere, but I digress.

Heath Slater officially becomes a member of the SmackDown roster

In what could perhaps be the best storyline that nobody thought would take off when it began, Heath Slater is now a SmackDown Tag Team Champion and a member of the SmackDown roster. He celebrated signing the dotted line with his first title defense with Rhyno against The Ascension.

A special thanks to @Rhyno313 and a Very Special Thanks to the @WWEUniverse. I couldn't have done it without you. pic.twitter.com/98l8vFe8NE

Luckily for them, they retained after Rhyno hit a gore on Viktor and an upset was completely out of the cards.

Becky Lynch gets her first No. 1 contender to the SmackDown Women’s title

The women’s division continues to showcase its talents and Tuesday night’s Fatal Five Way match to determine a No. 1 contender to Becky Lynch’s SmackDown Women’s Championship was another way for that to happen.

All these women showcased their skills and the match was good. Alexa Bliss got the win after tossing Carmella out of the ring after she hit Nikki Bella with a superkick, and took the pin herself. It looks like it’ll be Lynch vs. Bliss at No Mercy.

Randy Orton and Bray Wyatt continue their own mind games

After being attacked by Bray Wyatt backstage at Backlash, therefore rendering him unable to compete in a match [in real life, Orton’s suffering from a concussion at the hands of Brock Lesnar from SummerSlam and he still hasn’t been cleared yet to complete], Randy Orton was looking to address the Eater of Worlds.

And the Eater of Worlds listened. Though, it might not have been what message Orton wanted to send to Wyatt. Wyatt takes Orton’s words as a game, and it was even more apparent as he had Erick Rowan do his bidding on Tuesday night. The lights went out and when they came back on, Rowan was attacking Orton. Of course, Orton wound up hitting the RKO outta nowhere, so I think he still has a good beat on this eventual match with Wyatt down the road. Perhaps at No Mercy?

Despite The Miz appearing in the main event of the program, he said he wanted to renegotiate a new contract for SmackDown and, therefore, would not be putting his Intercontinental Championship on the line in any matches until he had a new contract signed, sealed and delivered.

While Ziggler tried his best to persuade Miz into a match with him, along with an appearance by the SmackDown general manager, that wasn’t enough to persuade Miz to do anything except walk off and out of the arena through the crowd, with his wife Maryse following in toe.

One week, The Miz is angry that he and his Intercontinental Championship aren’t featured prominently on SmackDown, and the next week Miz doesn’t want to defend the title unless he has a new contract. Something’s missing here.

Monday night on Raw, Jack Swagger lost a match to Jinder Mahal and was asked backstage about his contract situation. He didn’t give any answers and left.

On Tuesday night, he showed up on SmackDown and announced he was the newest member of the roster after getting into Baron Corbin’s face, who had just laid out Apollo Crews.

Unfortunately, Crews was an afterthought here. But I like where they’re going with Swagger, even if it doesn’t work. It shows they’re trying to find a good spot for him, and I’m always going to think that’s better than just having him toil away on the red brand.

• The Usos d. Hype Bros. by pinfall after Jey Uso hit Mojo Rawley with the Samoan Splash from the top rope.

• Baron Corbin vs. Apollo Crews ended in a No Contest after Corbin attacked Crews before the bell rung. Jack Swagger came out and stared Corbin down.

• Fatal 5-Way No. 1 Contender’s Match for the SmackDown Women’s Championship: Alexa Bliss d. Nikki Bella, Naomi, Carmella and Natalya by pinfall via throwing Carmella out of the ring after she landed a superkick on Nikki, then pinned Nikki.