WWE SmackDown rundown: Kevin Owens and Cesaro are on a collision course 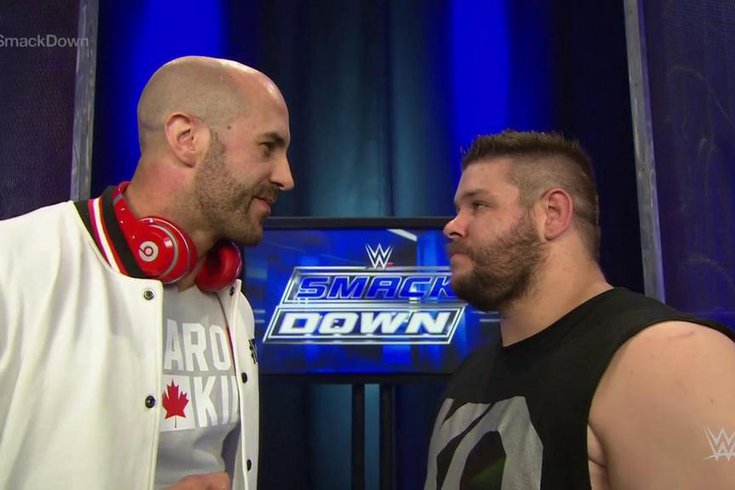 Kevin Owens and Cesaro will soon collide after what occurred on SmackDown Thursday night.

Thursday night’s edition of WWE SmackDown was probably one of the few editions of the second-highest rated program for WWE that had three main event caliber pay-per-view matches in one show. Starting off with the announcements that Dean Ambrose-Sheamus, Kevin Owens-Rusev and Seth Rollins-Cesaro would all take place on this episode of SmackDown, I had to do a quick double take and check out what show I was watching.

Of course, the outcomes of these matches weren’t pay-per-view caliber, except for maybe the main event. Owens looked like a punk, which isn’t good. Ambrose lost clean – again. And Cesaro looked probably the best out of all of them in a loss to the WWE World Heavyweight Champion. Not too shabby for the Swiss Warrior.

Here are the highlights of this week’s edition of SmackDown:

Even though it was a non-title match, Cesaro took the champion to the absolute limit on Thursday night during a great main event. With Cesaro assumingly a babyface at this point, it’s good to see him get more prominent positions on the television cards.

Even after his match with Rollins, having Owens come down and powerbomb Cesaro as the show went off the air was great to build toward their eventual match, likely at Summerslam. Here’s what Cesaro had to say after SmackDown went off the air.

Six words never made so many wrestling fans more excited than what we could expect from a Cesaro-Owens match.

I’m still on edge thinking about what WWE has done to Owens after he lost to Cena at Battleground. He tapped out and then looked like a chump by leaving the main event on Raw, even though he tried to explain those during a promo before his match against Rusev on Thursday night.

Owens says while Cena’s motto is “Never give up,” his motto is “Live to fight another day.” He said he has kids and a wife to provide for, so he couldn’t afford to suffer a career-ending injury by staying in Cena’s STF for too long. Honestly, I think this explanation is completely ass backwards and undoes a lot of what Owens brought to WWE since his debut – sheer toughness and a I don’t give a rat’s ass attitude. Where’s that now? Owens looks like a complete buffoon right now, and the fans that were on board with him and WWE for booking him so strongly are probably going to get screwed.

And his match against Rusev Thursday night made me feel a lot worse. I understand it’s a heel’s responsibility to look like a coward and get the crowd so mad at them so they have heat, but Owens leaving a match – again – and giving Rusev the win was so infuriating. He was a badass for the first month or two while on the main roster. Now he looks like a wimpy, scared kid who doesn’t have the smarts, either. They’ve effectively castrated Owens. He should be United States Champion.

I did enjoy the post-match interview with Cesaro and Owens, and at least having Cesaro mock Owens for leaving the match. I could see a program between the two having a series of excellent matches, but I’m not sure if it would do anything for either of them. One of them would need a championship to make the series of matches mean more – maybe they could even throw in the Intercontinental Championship instead of the United States Championship. Sorry, Ryback, but your title reign sucks.

I wasn’t happy to see Sasha Banks lose a match already while on the main roster, but I can accept the fact that it was her partner that got pinned and not her. As the NXT Women’s Champion, Banks shouldn’t be losing any matches on television, even if they’re tag matches, but it was also equally important for the Bellas to get some of their heat back after looking weak the past week […ha!] when being confronted by the new Divas generation.

The Divas match on SmackDown was long and excellent – so looks like the new generation is here to stay.

• Neville d. Adam Rose by pinfall via the Red Arrow. Stardust appeared on the Tron and cut a promo on Neville.

• Rusev d. Kevin Owens by countout. Rusev was about to lock in The Accolade, but Owens left and went backstage.

• Nikki and Brie Bella d. Naomi and Sasha Banks by pinfall after Nikki hit Naomi with a Rack Attack.

• Non-Title: Seth Rollins d. Cesaro by pinfall via the Pedigree.