WWE SmackDown rundown: Ambrose stands tall, but is he the favorite to win MITB briefcase? 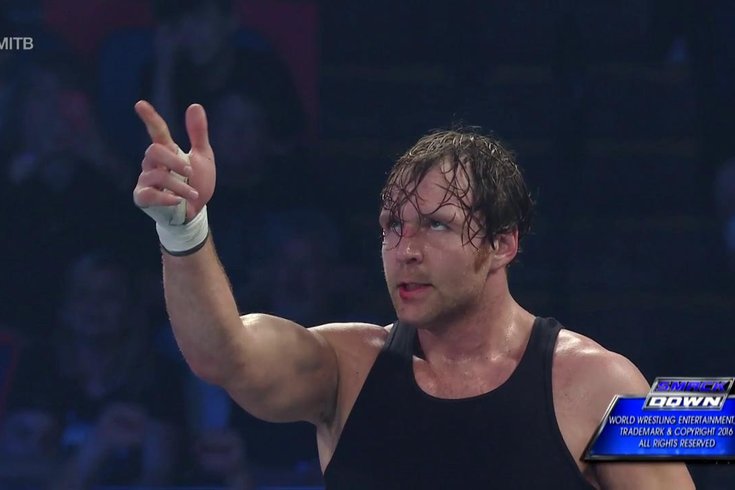 Dean Ambrose had the upper hand as SmackDown ended on Thursday. Does he carry that momentum to a Money in the Bank briefcase win on Sunday?

WWE’s last stop before Sunday’s Money in the Bank pay-per-view hit the Mississippi Coast Coliseum in Biloxi, Miss. Thursday night. The stage is set for the big event and SmackDown featured all the big names on tap for Money in the Bank except for one – John Cena. WWE showed footage from Raw where Styles and Cena signed the contract to make their match official, and they proceeded to give Styles promo time and a match on SmackDown. With no Cena around.

And there was neither Roman Reigns nor Seth Rollins on the show – just a video package. I’m fine with that, though. Makes it seem more special in a way. Maybe it’s just me.

I posted my Money in the Bank preview before SmackDown aired, and you can read that here.

Chris Jericho’s newly renovated Highlight Reel, complete with $20,000 in plush carpeting over the ring mat and a brand new JeriTron 6500, opened up the program Thursday night, and Jericho said that he finally would win the match that he created – the Money in the Bank Ladder Match. His guest on this edition of the Highlight Reel would be the man he’s been feuding with the last few months, the Lunatic Fringe, Dean Ambrose.

Ambrose said he digs the new set and had a cup of coffee with him that seemed to agitate Jericho. Once the Lunatic Fringe lost his JeriTron 6500 privileges, the other participants in this year’s Money in the Bank Ladder Match came out. Kevin Owens said he was going to win the briefcase and wasn’t going to tell anyone when he’d cash it in, which is kind of the point. Alberto Del Rio the interrupted Owens’ diatribe but didn’t get to talk much before Cesaro interrupted him. And before Cesaro could utter one word, Sami Zayn came out. A Money in the Bank brawl erupted after Ambrose poured his coffee all over the $20,000 carpet, which led to the night’s main event.

Ambrose, Cesaro and Zayn faced Jericho, Owens and Del Rio in a six-man tag team match, which is probably the most predictable match we’d see heading into Sunday. It was a standard six-man match, like we’ve seen time and time again, with Owens eating the pin after Ambrose hit him with Dirty Deeds.

Omen for Sunday? Owens pinned on SmackDown but walks away with the Money in the Bank briefcase? Check out what I think happens in my preview!

An interesting Fatal Four Way match pitted one-third of the WWE World Tag Team Champions, Kofi Kingston, against Luke Gallows, BigCass and Aiden English. While all four represent the teams that will battle in a Fatal Four Way match at Money in the Bank for the tag team titles, this match left a bit to be desired. It’s a cool idea in concept, but the match kind of dragged on and I wasn’t a huge fan of it. Maybe because I know these guys are all better than what I saw on television Thursday night.

The Club vs. The New Day soon?

And speaking of the WWE World Tag Team Champions, they interrupted a promo by AJ Styles and The Club backstage that set up a match pitting Styles against Xavier Woods. New Day had some pretty good lines – Woods complimented Styles on his whining since it goes great with his teenage emo haircut. Kingston asked why he called himself “AJ Styles” because there’s nothing stylish about him. Big E got in on the fun and said Styles sportsa “I wear socks with my sandals lookin’ haircut” before Styles snapped.

As for the match, I don’t think anyone thought Woods would have a chance at defeating Styles, but he’s a damn good wrestler and Styles made him look like a million bucks… again. That seems to be Styles’ MO as of late: make others look great while he himself looks great. It’s been a while since we’ve seen Styles win a match with the Calf Crusher, so naturally, Woods tapped out to it. Styles cut a promo on Cena after his match.

Charlotte took on Natalya in a rematch from Extreme Rules and Payback, but the WWE Women’s Championship wasn’t on the line. With both Dana Brooke and Becky Lynch in their respective ace’s corners, it seemed like maybe Natalya could get another win in this long-winding feud. That didn’t happen.

The Figure-Eight Leg Lock is LOCKED IN... @NatByNature has no choice but to tap! #SmackDown @MsCharlotteWWE pic.twitter.com/JrwUKEX5Ug

Brooke tossed the championship belt into the ring, and Natalya picked it up. The ref took it from Natalya and while his back was turned, Charlotte gave a chop block to Natalya and locked her in the Figure Eight for the victory. I spy a reason why she probably won’t be on the winning side on Sunday night. Hopefully this focus on tag teaming and not having Charlotte defend her title at the pay-per-view doesn’t last long. There’s plenty of talent in the division today to have Charlotte defend the championship month after month until Sasha Banks takes it away from her.

• Baron Corbin d. Zack Ryder by pinfall via the End of Days. Dolph Ziggler was on commentary during the match.

WWE announcer Jerry Lawler and his fiancée, Lauryn McBride, were arrested early Friday morning according to a report from CBS affiliate WREG in Memphis. The report states Lawler and his fiancée got into a violent confrontation, and McBride says Lawler “struck her in the head and pushed her against the wall” while Lawler says McBride “scratched him in the face, threw a candle at him and kicked him in the groin.”

They were booked at the Shelby County Jail around 1 a.m. Friday.

WWE released the following statement regarding the situation:

“WWE has zero tolerance for matters involving domestic violence, and per our policy, Jerry Lawler has been suspended indefinitely following his arrest.”