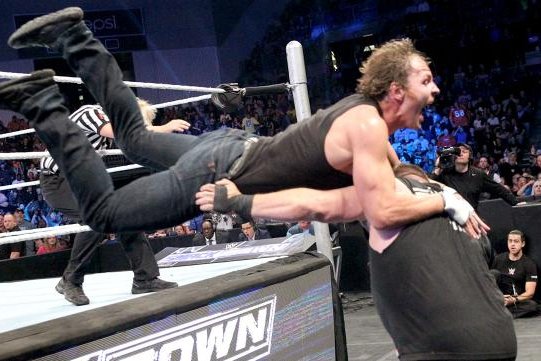 Dean Ambrose dives outside of the ring onto Kevin Owens after their match Thursday night.

Before SmackDown took the air on Thursday night, the wrestling world was flipped upside-down as we learned that the now former WWE World Heavyweight Champion, Seth Rollins, tore his ACL, MCL and medial meniscus in a match with Demon Kane during a live event in Dublin, Ireland on Wednesday night.

The injury forced WWE to strip him of the championship and they announced a tournament to take place at Survivor Series to crown a new champion, ala the 1998 edition of the pay-per-view event. With big stars like John Cena, Brock Lesnar and Randy Orton away from the screen, this might force WWE’s hand to push some new stars to fill in the top of the card that looks and feels vacated in its current form.

SmackDown did include a breaking news bulletin after a video package highlighting the Reigns/Rollins angle from Raw, basically saying the same exact thing I said above. The upcoming Monday Night Raw should be one for the record books, that’s for sure.

And, if we’re lucky, we saw one feud that could be elevated to main event status down the line in the main event Thursday night, and it was pretty awesome. More on that later.

Zeb Colter, with his newly acquired , Alberto Del Rio, opened up SmackDown this week with what sounded like a face promo – but it really didn’t work that way. Colter preached about his and Del Rio’s new nation, MexAmerica, being a state of mind of casting aside all of each other’s differences, with haters not being allowed in MexAmerica.

Honestly, these two have come across as rather sympathetic figures that should be getting cheered for their newfound tolerance. But they’re getting booed. I mean, Del Rio does work better as a heel, and so does Colter, but the storyline really doesn’t fit for a heel pair. It’s as if there’s another layer to the story that either I’m just not getting, or nobody’s getting.

After his match with Neville, Del Rio decided to attack his opponent, prompting a run in from Colter’s old pal, Jack Swagger. Del Rio and Swagger had a staredown, much like their staredown backstage on Raw Monday night. This feud is setting up quite nicely and I’m interested to see where it goes. I know Del Rio will come out on top, but I’m glad the creative team didn’t forget Swagger and Colter was together not too long ago.

Kevin Owens and Dean Ambrose may have given us the glimpse into the future. They are clearly two of the best young superstars the company has, so a feud between the two seems almost impossible to not happen.

Sure, the match had a rather premature ending with Owens faking a low blow, but it was perfectly executed by all parties. The referee’s vision was blocked, Ambrose’s kick was in a precarious spot during real time, but the replay showed it was a legal kick to the gut.

Owens, the master of the chicken heel, once again gave a fantastic performance into making people just hate him. It’s working for me. I hate when heels just leave the match and get counted out or disqualified on purpose [or, in this case, get his opponent wrongly disqualified] in order to avoid being beaten. Owens does this perfectly to a tee, and I finally caught myself on Thursday night. Owens is already the champion, and even though his title wasn’t on the line, he really has nothing to gain in matches like this against Ambrose.

And he’s the only one that realizes it. We don’t realize this as we’re watching. After the fact, it makes the most sense. There are too many heels that try to get the crowd to like them because they’re “edgy” and “cool.” Owens couldn’t care less about being liked by the fans while on television, and he really shows it in a way we haven’t seen in years. It’s time we start taking some notice… and boo the hell out of him.

Dean Ambrose sure hates him for it.

Which begs the question, how can the referee stop a match due to something he never saw? It’s the same logic that lets him disallow a tag from a face tag team, but allow a tag from a heel team despite never seeing the tag. Oh, well.

A feud between these two would be epic.

I’m not really sure why the Wyatt Family was put in a traditional Survivor Series elimination match, but you’ll never really hear me complain much about these kinds of matches. I like the idea of having one traditional elimination match per show leading up to the Survivor Series pay-per-view, especially considering the event will mostly be a tournament for the WWE World Heavyweight Championship.

Pitting the Wyatts against the Lucha Dragons and Prime Time Players was a strategic move – the loss hurts none of the four guys and the win allows the Wyatt Family to look even more like a threat, with all four members surviving the match. Does this mean we won’t see the four in a traditional elimination match come Survivor Series against The Undertaker and Kane? I surely hope we do.

• Non-Title: Alberto Del Rio (c) d. Neville by pinfall via the Tree of Woe stomp. Del Rio attacked Neville after the match, and Jack Swagger came down for the save.

• The Usos defeated The Ascension by pinfall via a top rope splash from Jey Uso onto Viktor.

o Strowman d. Young by countout after Strowman rendered Young unconscious with his submission hold outside the ring.

o Harper eliminated Sin Cara by pinfall via a clothesline.

o Natalya d. Tamina Snuka by pinfall via a rollup.