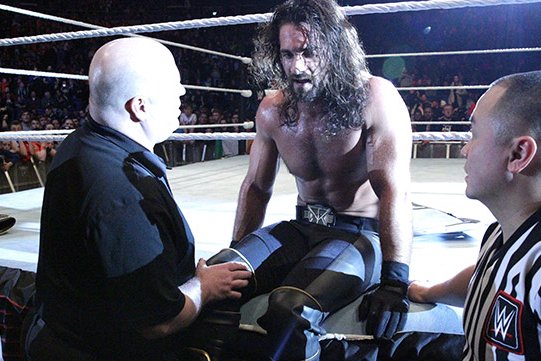 Seth Rollins leaving the ring after suffering a torn ACL on Wednesday in Dublin.

WWE is now being forced to reshuffle its deck, as the heavyweight champion of the world will now be lost for the next six-to-nine months.

Seth Rollins tore his right ACL, MCL and medial meniscus during a match in Dublin, Ireland, on Wednesday night, creating a huge gap at the top of the card -- especially with John Cena, Randy Orton and Brock Lesnar all being away from the company for the time being. The news was confirmed by WWE.com Thursday afternoon.

Rollins was wrestling Kane and was trying to perform a powerbomb/sunset flip combination out of the ring corner. As he landed, his right knee gave way badly and he fell. Rollins would finish the match, but needed help getting backstage.

Here’s footage of where the injury likely occurred:

A look at how @WWERollins tore ACL/MCL/medial meniscus Our 6-9 months, @WWE holding tournament at #SurvivorSeries pic.twitter.com/U2JEKOd46m

Reports began surfacing shortly after the injury that Rollins would simply “tape up” the knee and work the rest of the European tour. Of course, a torn ACL means he won’t be wrestling anytime soon.

Survivor Series, which takes place Nov. 22nd at the Philips Arena in Atlanta, Ga., will now feature a tournament to crown a new champion.

Rollins was one of the brightest spars in WWE for the last several years, so losing him for an extended period of time is not good. However, when there’s injury, there’s opportunity, and this will force WWE’s hand to push new stars to the top of the card. Stars such as Kevin Owens, Dolph Ziggler, Dean Ambrose and Cesaro may be the top four that might benefit from this. If there ever is a silver lining in this terrible situation, that would be it.

Rollins won the championship after cashing in his Money in the Bank contract during the main event of WrestleMania 31, defeating both Roman Reigns and Lesnar, the defending champion. While he hasn’t been booked well creatively in the seven months he’s held the title, he was really coming into his own and constantly having good-to-great matches each and every week.

The last time the Survivor Series event held a championship tournament was in 1998, when The Rock defeated Mankind after Vince McMahon, one year after screwing Bret Hart at the same event, screwed Mankind.

Rollins’ injury is a huge blow to WWE, but the company has had to deal with high-profile injuries before. It’ll be interesting to see who comes out of Survivor Series as the new champion, because this completely changes the Road to WrestleMania. Hang on for the ride.