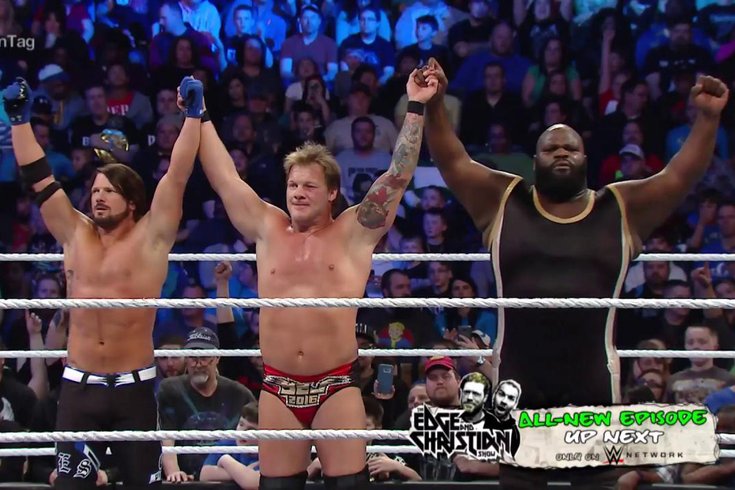 Suddenly, it looks like AJ Styles and Chris Jericho are working their way to becoming the best tag team in WWE. Thursday night, Mark Henry joined them in the main event.

Bankers Life Fieldhouse in Indianapolis was the setting for SmackDown on Thursday night coming off one of the biggest Monday Night Raws not just of the year, but maybe in history.

The Intercontinental Champion was back in action after missing Raw on Monday night, AJ Styles and Chris Jericho were working as a team again, and the WWE World Heavyweight Champion explained his massive beatdown of Roman Reigns on Raw, leaving him bloodied and battered.

The WWE World Heavyweight Champion, Triple H, opened the program with a message to his new challenger, Roman Reigns. H said that if Reigns forgot who he was, and there would be no retribution for attacking him at TLC in December, then there is no doubt in Reigns’ mind any longer.

It would have been nice if Michael Cole or anybody on commentary mentioned the beatdown H received at TLC from Reigns, but they didn’t. It was nice to see the champion mention it in his opening promo on SmackDown, just in case anybody forgot about that and tried to make sense of why The Game would want to destroy Reigns so bad at that point, even after becoming the WWE World Heavyweight Champion at the Royal Rumble.

Due to the beating H gave Reigns on Raw, WWE has played up Reigns receiving a broken nose and having surgery on Tuesday to fix it. I believe this is a storyline way to build the match further, and I like it. I don’t think Reigns’ nose was really broken, but he might be off television a couple of weeks to sell the injury and further build to the main event at WrestleMania. Real or not, the angle at the end of Raw was absolutely fantastic.

Styles and Jericho continue to wrestle as a tag team coming off the heels of Monday Night Raw, when they teamed up for the first time. This time, they added a third member to their team to face The New Day in the main event, and that was the World’s Strongest Man, Mark Henry.

I found it a bit humorous that Styles, Jericho and Henry mocked The New Day’s dancing, but WWE needs to be careful moving forward with the Tag Team Champions trio. They’re risking, at this point,

They’ve had some good wins recently, but they’re still the champions. They need to be booked strongly in Tag Team Title matches despite being as over as they are. I don’t think losing matches will necessarily kill their momentum cold, but we need to see the titles on the line a little bit more from week to week. Their last televised title defense was in January at the Royal Rumble. We need more.

As for Styles and Jericho, they hinted during a pre-match promo they might be teaming for quite a while after this. I’m not sure I like that on the surface, but I realize that it’s a way for the company to further introduce Styles to their audience and cement him firmly in the minds of the fans as someone who is legitimate. Using Jericho to get that point across is a great move, even if it meant going kind of backwards from a storytelling standpoint in feuding first and then teaming up afterward.

After missing Monday’s edition of Raw, the Intercontinental Champion, Kevin Owens, was back on television on SmackDown Thursday night. He slyly challenged Dean Ambrose to grant him his rematch for a shot at the Intercontinental title, but Ambrose wasn’t in the building. The Lunatic Fringe was manhandled by the Beast, Brock Lesnar, on Monday night, so Owens’ “challenge” seemed to be just lip service and was an excuse to give himself the night off afterwards.

Big Show came up from behind Owens and told him he’d be facing the largest athlete in the world tonight. Non-title, of course. Owens would have the last laugh, though.

In a pretty good match for what it was, Owens showed his in-ring prowess by crotching Big Show on the top rope when he was going for a huge chokeslam attempt, and the champion was able to win by countout.

Sasha Banks and Becky Lynch will be squaring off against each other in a No. 1 Contender’s match for the Divas Championship next Monday on Raw we learned on Thursday night. Becky and Natalya went one-on-one on SmackDown before Naomi and Tamina attacked both women, prompting Sasha to come in for the save. Charlotte then came out and announced the No. 1 Contender’s match, and that she would have a front row seat ringside, likely at the commentary table.

I’d look for an angle such as Charlotte getting both women disqualified in the match, therefore thinking she doesn’t have to defend her title at WrestleMania, only for it to be made into a Triple Threat Match. Or, we’re just going to get a series of Sasha-Becky matches until a No. 1 Contender is made. Either way, we all win in this scenario.

R-Truth finally got a win on Thursday night, and he actually had help from the guy who’s wanted to be his tag team partner for weeks. In a match against Heath Slater, R-Truth got the win after Goldust punched Slater right in the face into a pin for his boy. Are the days of the Golden Truth in the not so far distance?

You’ll want to tune into Raw on Monday night if you’re an Undertaker fan. WWE announced the Dead Man will be on Raw and will most definitely discuss his WrestleMania match with Shane McMahon inside Hell in a Cell.

• D-Von Dudley d. Jimmy Uso via a rollup after Bubba Ray interfered when the ref was distracted.

• Non-Title: Kevin Owens (c-IC) d. Big Show by countout after Owens crotched Show on the top rope as he was trying to go for a chokeslam.

• Natalya d. Becky Lynch by disqualification when Naomi and Tamina attacked Natayla on the outside of the ring. They went to attack Becky, but Sasha Banks made the save.

• R-Truth d. Heath Slater by pinfall after Truth rolled up Slater after Goldust nailed him with a punch while the ref was distracted.