WWE Survivor Series 2017: Who won the battle of the brands? 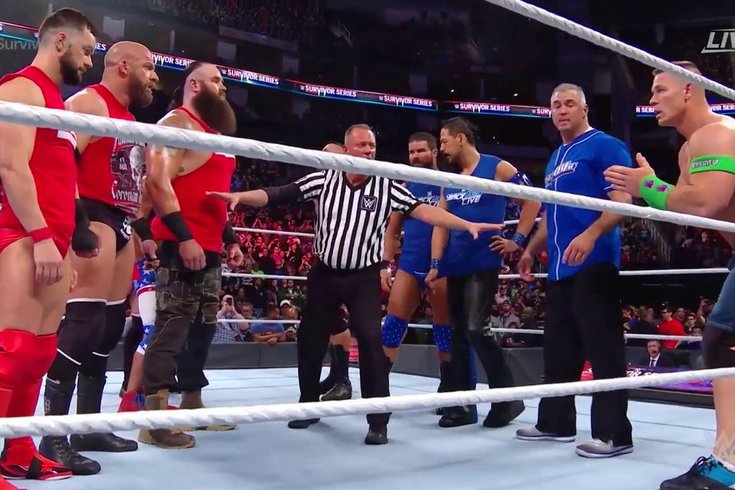 Members of Team RAW and Team SmackDown face off before the bell in Sunday night’s main event.

The 2017 edition of Survivor Series invaded Houston and the Toyota Center Sunday night, with the entire evening pitting WWE’s Raw and SmackDown brands against each other.

I mean, it’s not like WWE has jammed that down the viewers’ throats or anything these last few weeks. But the card had seen various changes throughout those weeks, with AJ Styles winning the WWE Championship from Jinder Mahal, Charlotte Flair winning the SmackDown Women’s Championship from Natalya, and Cesaro and Sheamus winning the RAW Tag Team Championships from Seth Rollins and Dean Ambrose.

The change in matches didn’t hurt the card at all. In fact, it improved it. The card went from an event not exactly tickling my fancies to one that became one of the better cards of the entire year. Even though I think the brand war is a bit played out, especially since I remember almost everything from the first brand extension, I was pretty excited to see how this pay-per-view played out. And I certainly wasn’t disappointed.

Heading into the main card, we were treated to a five-man announce booth! Already I felt the queasiness in my stomach for, um, having to stomach all of that, but it didn’t seem to hurt the show at all from my perspective. Michael Cole, Corey Graves, Booker T, Tom Phillips and Byron Saxton all did a good job in their roles throughout the night. There wasn’t ridiculous and incessant fighting or bickering between brand commentators that I had feared upon seeing the five-man booth. All was good.

Elias defeated Matt Hardy by pinfall on the Kickoff Preshow

Here’s a randomly thrown together match just to fill out some of the preshow. Nothing great. Elias got the win after hitting Hardy with the Drift Away.

I’m not sure why WWE can’t at least give these matches a place on the main card. With Amore leading the division, the Cruiserweights have been a much more entertaining facet of their television programming in recent months. This could have easily opened the main card.

Amore got the win after hitting Sole Food on Kalisto.

So, the duo of Owens and Zayn were sent home from the United Kingdom tour a few weeks ago and now was relegated to the Kickoff Preshow of one of the biggest shows of the year. But, hey, it wouldn’t be the only appearance they’d make on the show.

Owens hit the Pop Up Powerbomb on Fandango to get the win.

Heading into this match, I had a feeling that, given New Day’s declaration that they were far more of a brotherhood than The Shield, at least one of Big E, Xavier Woods or Kofi Kingston would actually turn heel on their fellow brethren, giving us the possible shock of the night a bit early.

I’m pleased to say, at least for now, that wasn’t the case. These two teams brought the goods in one of the best main card openers of the year. One of my favorite parts was New Day’s rotating tags as they continued stomping Ambrose in the corner with Booker T on commentary exclaiming, “Referee, do your job!” even though everything New Day was doing was completely legal.

This match got off to sort of a slow start and had a couple slow moments where it seemed like the wrestlers didn’t know which spots to do, but it all balanced out because the ending sequence was absolute fire. The Shield got the win after triple powerbombing Kingston off the top rope.

While many were hoping for a surprise appearance from Paige in this match, Natalya was eventually granted the fifth spot on SmackDown’s team after losing the Women’s Championship to Charlotte this past week on SmackDown.

Imagine my surprise when Becky Lynch was the first woman to be eliminated in this match… and from Bayley! Bayley made a quick sly blind tag and was able to roll up Lynch to get the pin when Lynch was focused on Alicia Fox.

Shortly after, Tamina eliminated Bayley after hitting the flying splash from the top rope and pinning her. Soon after, Tamina and Nia Jax came face to face and I was totally there for it. That’s a great match waiting to happen, and I’m sure we’ll get it sooner or later. Tamina once again got the better hand of this one, as she hit Jax with a splash off the ring steps on the outside of the ring and then beat her back inside the ring, eliminating Jax by countout.

Naomi would eventually eliminate Fox by pinfall with a sunset flip, which seemed a bit awkward. Maybe it wasn’t the planned spot, but it didn’t matter because seconds later, Sasha Banks eliminated Naomi by submission via the Bank Statement. That left Banks and Asuka against Carmella, Natalya and Tamina.

But not for long. Asuka took care of business and eliminated Carmella by pinfall after a kick to the face, but Natalya got one back for her team by forcing Banks to submit to the Sharpshooter. Even though the odds were stacked against Asuka, she never wavered, and submitted both Tamina and Natalya to an armbar and Asuka Lock, respectively.

This match had very solid build, especially on social media. Both Miz and Corbin posted video messages back and forth on Twitter, and it gave this match a little more umph than a normal heel vs. heel match would.

Maryse, Miz’s pregnant wife, was taking in the action from the crowd. Miz worked on Corbin’s knee all match, but it wasn’t enough to ground The Lone Wolf. Corbin would eventually hit the End of Days and pin Miz to win SmackDown’s first match of the night.

When Cesaro and Sheamus defeated Rollins and Ambrose for the RAW Tag Team Championships, I didn’t think there was a chance this match could live up to the expectations that I previously had for The Usos vs. Ambrose/Rollins.

I was wrong. This match was fantastic. The Usos have really come into their own these last couple years, and they are one of the best tag teams WWE has ever produced. Cesaro and Sheamus just get better week after week. A lot of high-flying stuff here, as The Usos are getting a lot more cheers lately, and it wouldn’t surprise me if they become full-fledged babyfaces soon. They may not even need to change their gimmick, because it really, really works.

The crazy sequence at the end of the match was also fantastic. Jimmy had set himself up to dive onto Cesaro on the outside from the inside of the ring, and as he dove, he tagged Jey, who proceeded to hit the top rope splash on Sheamus and get the win.

Great match and way better than I expected.

This match had such a great story. Flair basically the veteran with Bliss trying to measure up to her greatness and doing everything she could to win. These two had a fantastic match.

Bliss had many chances to put Flair away, but the mistake of going for Twisted Bliss cost her. Flair got the knees up, hit the boot to the face and then locked in the Figure Eight. Bliss tried hanging on, and her facial expressions were excellent, especially her realization that she had no other choice but to tap out.

In the first few minutes of this match, I couldn’t help but think to myself, “They couldn’t have Lesnar do this to Jinder Mahal?” After Styles had won the WWE Championship from Mahal a few weeks ago on SmackDown, I thought they’d have made this match more even-balanced. It certainly didn’t seem that way once the bell rang, as Lesnar completely dominated Styles.

But it was all part of the story. Styles made his comeback, and, man, we had ourselves a great match. From his 450 splash to the Phenomenal Forearm that Lesnar actually kicked out of, Styles made it known that he could actually defeat Lesnar. And he came oh so close.

Lesnar caught Styles as he was going for a second Phenomenal Forearm and planted him with the F5 and pinning him for the victory. Styles cemented himself as one of the greatest performers in the world… ever.

The name value in this match just made it the main event. I don’t have a particularly bad thing to say about match placement here. It also helped guys like Samoa Joe, Finn Bálor, Braun Strowman, Shinsuke Nakamura and Bobby Roode.

Of course, none of those guys factored into the outcome of the match. But it was pretty cool that we got to see Nakamura vs. Bálor, Triple H vs. Nakamura, and Triple H vs. Roode in the ring, albeit a short time.

Even though they were eliminated, Nakamura and Roode didn’t exactly follow the rules of going back to the locker room. They hung around to help their teammates suplex Strowman through the announce table to give him a little rest.

John Cena, who was basically an afterthought in the match, had a few good moments, too. He eliminated Joe after hitting him with two Attitude Adjustments, but then was eliminated by Angle after an Angle Slam.

Shortly after, Randy Orton eliminated Bálor with an RKO, and then Owens and Zayn made their presence felt again and attacked Shane McMahon outside the ring. McMahon would get a steel chair to fend them off, and then Orton RKO’ed Owens. However, Strowman would hit Orton with another powerslam and eliminate him, leaving himself, Triple H and Angle against McMahon.

While Strowman was getting ready to annihilate McMahon, Triple H tagged himself into the match, confusing Strowman. Then, Angle tagged himself in, confusing Triple H. Angle would eventually get the ankle lock on McMahon, but Triple H wasn’t having it. He came into the ring, pedigreed Angle, and put McMahon on top of him for the pin. Then, he seemingly sided with his brother-in-law as he stared a hole through Strowman, but all of the previous actions were just so Triple H could eliminate McMahon himself with a pedigree. Stand up, Team RAW! You won!

However, Strowman was less than thrilled. He grabbed the COO by the throat and yelled if he ever did that again, he’d never play this game again. H tried to attack Strowman from behind and then pedigree him, but the monster blocked it and powerslammed him. Then added a second one for good measure.

Strowman sent a clear message, and, it wouldn’t surprise me if he’s the company’s odds-on favorite to win the Royal Rumble in two months.