Your WWE Raw roundup: Triple H returns to get The Authority on the same page for Payback 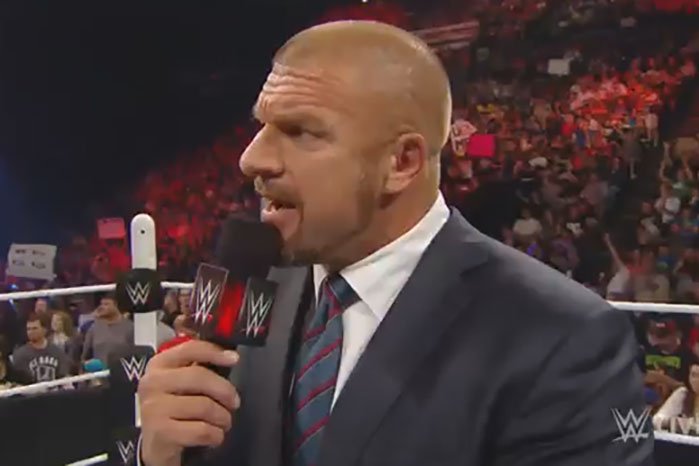 Triple H returned after a month away to try and refocus The Authority.

WWE Chief Operating Officer, Triple H, returned to Raw in Cincinnati, Ohio at the U.S. Bank Arena just six days prior to the next WWE pay-per-view, Payback, on Monday night.

His main focus was to try to fix the problems the last few weeks between his Director of Operations, Kane, and WWE World Heavyweight Champion, Seth Rollins. But, in fact, it seems as if Triple H only made things worse in the short run, but perhaps better in the long run.

Added to Sunday’s Fatal Four Way Championship Match is that if Rollins loses his championship, Kane will be fired as Director of Operations of WWE. If that’s not enough incentive for these two to get along, especially on Sunday, I don’t know what is.

I’m still sick of the whole Kane involvement in a major angle and that major angle still being The Authority’s issues with each other. Something new, please.

While back for the evening, the COO booked each participant in the Fatal Four Way this Sunday in matches – Roman Reigns to face Kane, Randy Orton and Seth Rollins to battle in the main event, and Cincinnati’s hometown boy, Dean Ambrose, to take on J & J Security in a Handicap Match.

To say Ambrose was over in his hometown is putting it very lightly – there were three or four times during the opening promo where Rollins had to stop speaking due to the chants for the Lunatic Fringe. After Ambrose won his match easily and Reigns and Kane went to a No Contest, Rollins was disqualified in the main event with Orton as J & J Security interfered. Rollins and his cronies attacked Orton as Kane watched on outside the ring holding a chair before Ambrose and Reigns came in for the save. Rollins walked into a Dirty Deeds by Ambrose, a spear by Reigns, and an RKO from Orton.

But that wasn’t the end. Reigns speared Orton and then Ambrose hit Reigns with Dirty Deeds as the hometown boy stood tall to end the program. It was quite the surprise ending given how WWE usually likes to book hometown superstars.

I’ll be posting my predictions for Payback tomorrow morning right here. Make sure you stay tuned for that.

Rusev said on Thursday night that he was going to confront United States Champion, John Cena, face-to-face on Raw, and he kind of, sort of, did. Rusev interfered in a fantastic match between Cena and Neville for the United States title by hitting the ring and kicking Neville after he hit Cena with his Red Arrow finisher. He slapped The Accolade on Cena and left him lying, which probably gives away Sunday’s finish.

Speaking of Cena, him facing the young guys in his open challenge really make for better television matches – that’s two weeks in a row where I thought there was a chance [albeit a tiny, miniscule one] that Cena would lose his U.S. championship. He can really have some great matches, and has proven he hasn’t lost a step by having great matches with some of the youngest guys on the roster. His U.S. Championship Open Challenge has really brought the in-ring product of Raw up a notch. That being said, I’m not sure having Rusev lose for a third time in a row to Cena would benefit anyone, but if it means a main event push for Rusev, I’m all for it. I think he’s ready.

Daniel Bryan made his long-awaited return to Raw to forfeit his Intercontinental Championship due to ongoing injuries. Bryan, who is currently scheduled to appear at Payback, said he underwent an MRI last week and will soon find out if and when he can return to the ring. In the meantime, Bryan relinquished the Intercontinental title so others may fight for it in his absence. No pomp and circumstance, just a simple promo from a guy who just looks defeated after a year of battling injuries. I wouldn’t mind them adding the championship to the Ziggler/Sheamus feud.

Ryback exacted some revenge on Bray Wyatt finally after what felt like months of Wyatt having the upper hand in this new feud. It wasn’t much, but it was paramount for Ryback to get some physical advantage on Wyatt before their first match – whenever that will be.

The WWE Tag Team Champions, The New Day, continued their heelish tactics Monday night by insulting former Reds [and Phillies] great, Pete Rose, by saying Rose didn’t deserve a second chance at the National Baseball Hall of Fame. Kofi Kingston announced that the team would be defending their tag team titles against Tyson Kidd and Cesaro in a two out of three falls match at Payback on Sunday. I like that the Tag Team Championship is back in a prominent position on the program, and here’s hoping the tag team match at Payback lives up to the hype, because I’m expecting some big things out of the participants involved.

I like the fact that Erick Rowan and Luke Harper are back together, but this is where WWE’s storytelling needs to be better. Last Thursday on SmackDown, Rowan looked like he was going to confront Harper, only to assault Fandango. No explanation after the fact, and no explanation during Raw. Then Rowan destroyed Fandango in a match before leaving with Harper. They seem to be back together as a tag team, which is a better use of them than having them toil away in the midcard like they have been since the Wyatt Family split. They don’t exactly fit in the WWE Tag Team title picture now, but after Payback, they certainly can slide into that role.

Or Macho Mandow and Curtis Axelmania can slide into that role, too. Together, they staved off The Ascension before celebrating with each other and shook hands. The Mega Powers explode … again!

Or maybe it could eventually be the Prime Time Players, if they actually wrestle a match any time soon.

Who am I kidding? The New Day is the best act in WWE today and they should remain Tag Team Champions for a while.

And get ready, because there’s another pay-per-view coming at you in just two weeks!

Michael Cole announced that Elimination Chamber will return to pay-per-view on the last day of this month, as the event will take place from Corpus Christi, Texas. This undoubtedly is to reach out at anyone who may be subscribing to the WWE Network for free for the month of May, as they’ll get to see two pay-per-views for free via the Network. If you haven’t subscribed yet, you can sign up for the WWE Network for the entire month of May, FREE, right here.

• Erick Rowan [with Luke Harper] d. Fandango by pinfall via a chokeslam in 37 seconds, per Michael Cole. Harper then assaulted Fandango himself.

• Roman Reigns and Kane fought to a No Contest after Kane attacked Reigns before the bell rang. The two brawled at ringside, and it ended with Reigns standing tall after spearing Kane over the announce table.

• Tamina Snuka d. Brie Bella by pinfall via a superkick.

• Damien Sandow [as Macho Mandow] wrestled Curtis Axel to a No Contest after The Ascension interfered.

• Cesaro d. Big E by pinfall after using a unique rollup combination to pin him.