The 10 weirdest and wackiest stats and records in Sixers history 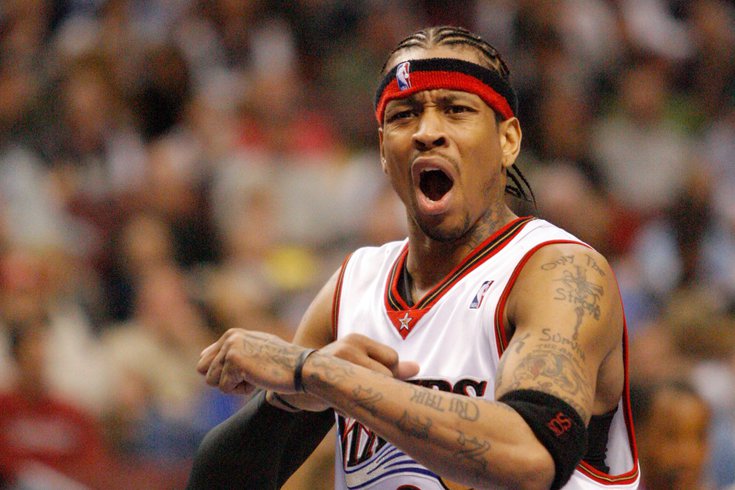 Philadelphia 76ers guard Allen Iverson wants a call from a ref but doesn't get it.

After spending hours staring at Baseball and Football Reference, we had some fun discussing some of the weirdest wackiest stats and records in the history of the Phillies and Eagles franchises.

Now it's time to turn to basketball and the Sixers.

We've thrown together the 10 most bizarre and interesting accomplishments and mis-accomplishments over the last 75 years of 76ers basketball. Here are our favorites:

Before he had his abilities stolen by the Monstars in Space Jam, Shawn Bradley was a gigantic, 7-foot-6 fouling machine for the Sixers. In his second season, he set a franchise record with 338 fouls (or 4.1 per game).

Who has the highest single-season assist rate in Sixers history? Well, Ish Smith of course. In 2015-16 Smith contributed on 39.9 percent of buckets scored by his teammates while he was on the floor. That's more than the best seasons from Ben Simmons, Allen Iverson or Mo Cheeks.

Not a shocker by any means, Iverson holds eight of the Sixers' 10 highest single-season usage rates. The other two? Joel Embiid in his two most recent seasons.

The Sixers all time three-point field goal percentage list is very interesting. We just want to include it here...

Few of the players above were really important Sixers. Some were just passing through, like Shamet or Redick. Some were rentals, like Belinelli or Barros. And the one who is currently with the team, Milton, has played 52 total games with the club.

Who leads the Sixers all time in assists per game? That would be Ben Simmons. Who says he’s not a point guard? He is currently averaging 8.0 per game, well ahead of No. 2 on the list Mo Cheeks. Wilt Chamberlain is fourth all-time with 6.8 apg.

Speaking of Wilt, the Hall of Famer had his 100 point game and most impressive seasons as a Warrior, but he did nab 43 rebounds in March of 1965 as a 76er. What many might also be surprised to know is The Stilt is tied for the franchise record in single game assists with Mo Cheeks at 21.

Since it became a tracked stat in 1996, Al Horford’s +41 plus/minus rating against the Kings this past March is tied with Andre Iguadala (in 2008) for the highest in Sixers history.

BONUS: The worst plus/minus in a single Sixers game ever came from Steven Hunter, who was -48 in a 2007 loss.

Due to the way the NBA scores the MVP Award, Charles Barkley got by far the most votes for first place in 1989-90 but still lost the award to Magic Johnson. Barkley got 38 first votes to Magic’s 27, but the Laker got more second and third place votes which added up enough to land him the distinction. Barkley would controversially beat out Michael Jordan for the award three years later.