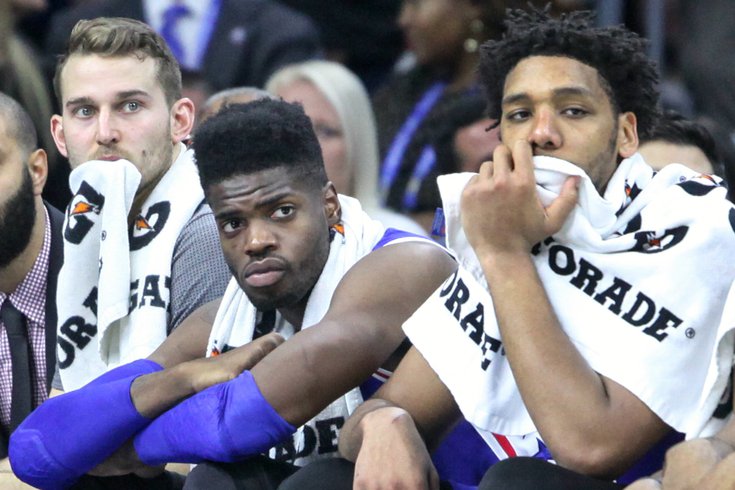 And now for a much more straightforward, but no less depressing list to finish up "Worst Week" here at PhillyVoice: Worst Team.

Some of these teams are pretty fresh in our minds, like the Sixers during The Process who were almost unwatchable. Others are muddled by history, but were so atrocious it's worth revisiting them.

Whatever era these teams played in (and we kept it to the last 100 years to avoid having to write about the dreadfully bad Philadelphia Quakers from the 1890s), they are reminders that in sports, what goes up also comes down. A note, we tried to keep the list to one team per era. There are some pretty bad stretches, and we decided to highlight the worst team, if there were consecutive terrible seasons. The lone exception is The Process Sixers, which had so much upheaval we included two from that timeframe.

As always, before we unleash our Top 10, lets take a look at a few really horrible teams that didn't quite make the cut:

This was just the warm up act for the 2015-16 team that lost 72 games. This was the year that they traded away reigning Rookie of the Year Michael Carter-Williams, and were led in scoring by Tony Wroten. On offense they were second to last in the league in scoring and last in shooting, but their defense was actually in the middle of the pack.

This is the team that got Andy Reid fired. They won three of their first four before losing 11 of their final 12. Michael Vick and Nick Foles each started at quarterback while LeSean McCoy led all rushers and DeSean Jackson led all pass-catchers. Fletcher Cox had 5.5 sacks as a rookie, and the team drafted Lane Johnson a year later with the fourth-overall pick.

The Eagles lost their first 11 games in 1968, with Norm Snead throwing 11 touchdown passes and 21 interceptions. Tom Woodeshick led all rushers with 947 yards while Ben Hawkins caught 42 passes for 707 yards. They picked third in the draft that spring and took defensive back Leroy Keyes, passing over Mean Joe Greene. If they had lost just a little more, they could have gotten O.J. Simpson.

The QB position combined to throw 31 interceptions in 1963, as the team fell far from their 1960 championship form. Timmy Brown was a Pro Bowler that year, and had 1,328 yards from scrimmage. They were out-scored by 139 points that year, or just under 12 points per game.

This team may not have one of the five worst records in Phillies history, but take away Steve Carlton and it might get really ugly. Somehow in 1972, the Phillies Hall of Fame ace won 27 games and had a 1.97 ERA. He won the Cy Young award that year and deservingly so. Replace Carlton with a replacement level pitcher and this team loses well over 100 games.

And now, here's a look at 10 worst losses in Philadelphia history...

The 1969-70 Flyers are kind of the baby Broad Street Bullies, as superstars Clarke (just 20) and Parent (24) were just getting their feet wet in the third season of hockey in the franchise's history. Gary Dornhoefer led all scorers with 26 goals. One thing you'll notice is they had of a ridiculous number of ties with 24. This is the most ever by an NHL team.

This was a very eventful year for the Phillies, despite them finishing in dead last place in the NL East after posting one of the worst run differentials in franchise history. Players traded away during this season include Cole Hamels (right after his no-hitter in Chicago), Chase Utley and Jonathan Papelbon (in addition to having traded Jimmy Rollins away prior to the season). This was the fire sale season that was supposed to set in motion a future era of contention. We are still waiting for that one.

This was the team that sucked so badly they were able to draft Allen Iverson the following summer. The cycle of being bad is important in pro sports (The Process is an extreme of that), and so 1995-96's absolutely atrocious 76ers were an important footnote to the history of the franchise. They were 27th in offensive rating in the entire league and 29th in defensive rating, scoring 94.5 points per game while allowing 104.5. You saw in "The Last Dance," Jordan's Bulls winning games with scores in the 80s and 90s — it was a different game back then and those numbers are plain bad.

This team was baaaaad. On offense, Bobby Hoying, Koy Detmer and Rodney Peete combined to throw seven total touchdowns and 18 interceptions. Their leading receiver was Jeff Graham, who accumulated just 600 yards. They had, not surprisingly, the 30th ranked offense in the league that year, with their defense doing a little better ranking at 19th in points allowed and 17th in yards allowed. They were held to three points or fewer five times during the regular season. But it was all worth it. The Eagles, in the 1999 draft, used the second-overall pick to take Donovan McNabb, setting the course of the franchise for a decade.

We wrote about this ridiculous season already, in our post about weird and wacky Phillies records and stats:

In 1930, Phillies slugger Chuck Klein set still-standing NL records for RBI (170) and extra base hits (107). He hit .386 and slammed 40 homers that year. That season was an incredible accomplishment, but it gets better... That 1930 season was one of the wackiest ever for the Phillies' franchise. Led by Klein, the team's high-powered offense set franchise records that year for total bases, hits, runs, and doubles. They scored 944 total runs (in 156 games), the fourth most of any year for the Phillies. And yet, the squad allowed a ridiculous 1,199 runs and 1,993 hits. Both of those are not only team records, but National League highs as well. In other words, they had the the worst pitching and defense in National League history. The 1930 Phillies went 52-102-2, wasting Klein's revelatory season.

It wasn't a passing league in 1972, we know that. But when your team combines to throw just 10 touchdown passes to 20 interceptions over the course of a season it's still really bad. That's what John Reaves and Pete Liske did in 1972 as the Eagles lost five in a row to start the year, and five in a row to end it. The team was toward the bottom of the league in every single category that season, and they had just two Pro Bowlers in WR Harold Jackson and Bill Bradley. What was Bradley's position? Well, he was the team's punter and kick returner. He also was a very good safety. Aside from Bradley, it was as forgettable a season as the Eagles ever had.

The names on this squad are familiar to fans — Richards, Gagne, Carter, Forsberg — but the defense was just brutal. The team as a whole was outscored by more than entire goal per game. That's really hard to do. Top defensemen Derian Hatcher and Joni Pitkanen combined to go -49, while winger Kyle Calder played in 59 games and had a -31 to show for it. In net, Antero Nittymaki went 9-29-9 in his starts, allowing 3.38 goals per game with a .894 save percentage. In the subsequent draft, the Flyers lost the lottery for Patrick Kane and took James Van Remsdyk second overall.

The Phillies in 1942 were 62.5 games back from first place and 67 games below .500. They never won more than three games in a row and were shutout 16 times. They were 3-32 in games decided by five or more runs. On September 11th, they played a game that had 393 fans in attendance — their stadium, Shibe Park, had a capacity of 33,000. The best thing about the 1942 Phillies is the names of the players. Pinky May, manned the hot corner while Boom Boom Beck and Hilly Flitcraft were on the mound. Their pitching staff had 52 complete games but only two shutouts. Good times.

This team is the stuff of legend. In the height (or low point) of The Process, the Sixers nearly matched their own record for the most losses in an NBA season. They were ranked 29th in shooting percentage, 30th in rebounding and 29th in scoring. They allowed the second most points per game and T.J. McConnell was the only player to appear in at least 81 games. This team lost 18 games in a row to start the season, then lost in 11 in a row after their first win as they fell to 1-29. Then, from February 8th through April 2nd, the Sixers went 1-24. They would get the first pick and land Ben Simmons but, man, this is really as bad as it gets.

On an average night during the nightmare 1972-73 Sixers' season, the squad lost by a score of 116.2 to 104.1. They opened the season with a 15-game losing streak, and then followed it with a 20-gamer. Their best player from the season prior, Billy Cunningham, bolted to join the ABA as Hal Greer was the only remaining member of the 1967 title team on the roster (he was 36 and played in just 38 games).

Midway through the season, the team fired head coach Roy Rubin, who was 4-47 leading the team. Rather then hire a new coach, the team just anointed their shooting guard Kevin Loughery as player-coach. On Feb 14, with a ridiculous 4-58 record, the team turned it on, winning five of seven to bizarrely double their winning percentage, which stood at .065 prior. They would, of course, unceremoniously lose their final 13 games. They selected Doug Collins with the first overall pick in the ensuing draft.