Hint: They're not all "Rocky" and "Creed" 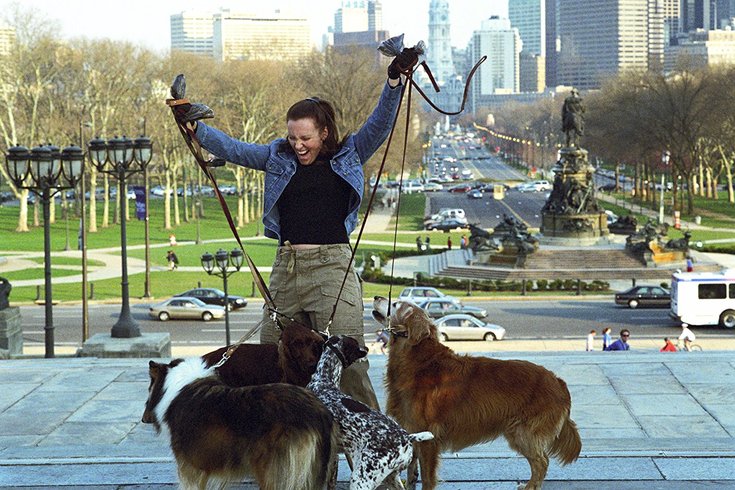 In a scene from the 2005 movie "In Her Shoes," actress Toni Collette stands on the steps to the Philadelphia Museum of Art – à la Rocky – and Eakins Oval and the Ben Franklin Parkway are seen in the background. The film, which also starred Cameron Diaz, featured additional scenes in Philadelphia on South Street and Rittenhouse Square.

Anyone anywhere can probably name at least one movie made in Philadelphia, and more likely than not, they will offer up the hot insider tip that "Rocky" was filmed here.

Even for locals, filming credits to Philadelphia’s name only stretch so far. It’s safe to say most people would also know to note “Silver Linings Playbook,” all the M. Night Shyamalan films (especially “The Sixth Sense”) and "Philadelphia," the city's namesake movie that landed Tom Hanks his first Oscar.

When a major film does hit the city, though, Philadelphians are not hesitant to boast about their newfound cinematic accomplishments. Servers at the Llanerch Diner are still wearing “Silver Linings Playbook” T-shirts, and there’s a freaking "Rocky" statue in front of the museum that houses one of the best art collections in the world – so maybe John Oliver had a point.

Nonetheless, there are dozens of films over the last few decades that have been shot in and around Philadelphia, whether it's been a one-off scene or the entire movie, and it's time we show them some love. Check out our collection of movies shot in and around Philadelphia (with a couple of honorable mentions), plus the next movie we expect will put Philly’s film scene on the map.

FILMED IN THE CITY

The '90s Scorsese film follows the sordid love affairs of future Lincoln Daniel Day-Lewis as he maneuvers New York’s 19th-century high society. During a night at the opera, however, his character is actually right here in Philly. To capture the fancy, opulent setting where Day-Lewis’ character sets his sights on a sordid love affair with Michelle Pfeiffer, the film opted for the backdrop of Philadelphia's Academy of Music – a seamless fit for a movie otherwise shot in New York and Paris.

Toni Collette and Cameron Diaz are sisters, with Collette the successful sister with an apartment on Rittenhouse and an impressive shoe collection, and Diaz the illiterate, unemployed sister. It’s like they have nothing in common … except for a love of the Jamaican Jerk Hut. Two scenes from "In Her Shoes" were filmed at the South Street spot, and a slew of other Philadelphia locations, including Rittenhouse Square Park, also were featured.

Owen Wilson somehow convinces the largest newspaper in Philadelphia to pay him some kind of salary to write a column about his dog every week. Though much of the movie was filmed in Florida, some scenes also feature Broad and Walnut streets in Philly, as well as a rural country home in Chadds Ford, Pennsylvania, where Wilson and Jennifer Aniston’s characters settle down.

Some of the most memorable scenes in "The Wrestler" were shot in Asbury Park, New Jersey, but a South Philly venue iconic among wrestling fans was the backdrop to some other essential scenes. The 2300 Arena at South Swanson Street, formerly known as the Philadelphia Arena, was used to film some of the wrestling match. Today, 2300 Arena still hosts wrestling matches, along with dance parties and other events.

Known to many as “the one that is bad,” the second chapter of Shia LaBeouf's "Transformers" saga was filmed throughout Philadelphia, with LaBeouf even joining the Ivy League as his character attended a campus identical to the University of Pennsylvania. Other scenes were also shot at Laurel Hill Cemetery, Girard College, Delaware Power Plant, Eastern State Penitentiary, Chancellor Street, City Hall and the Italian Market’s Cappuccio’s Meats.

Though the thriller starring Bradley Cooper and a bottle of magic smart pills is set largely in New York City, "Limitless" also filmed some scenes in Philadelphia, where it’s relatively more affordable to be the struggling writer character that Cooper portrayed. In fact, the back room of Rittenhouse’s The Happy Rooster was used for a dive bar scene in the film. Like Cooper’s other Philly-filmed movie, “Silver Linings Playbook,” parts of "Limitless" also were shot in Drexel Hill.

FILMED IN THE ‘BURBS

The horror-thriller film based on the Toni Morrison novel is set outside of Cincinnati, but Chester County, Montgomery County and a soundstage in Philadelphia all were used during filming. Additional scenes were shot in Maryland and New Castle, Delaware, but keep an eye out for glimpses of Valley Forge National Historical Park during some of the outdoor scenes because OPRAH. HAS. BEEN. THERE.

Most people haven’t seen this offbeat indie film that somehow got actors like Alan Cumming, Emmy Rossum and Sandra Bernhard to star in it. Rossum stars as a good girl gone ~*~BAD~*~ who attends the made-up Bryn Mawr Academy, a fancy af private school that used Bryn Mawr College and Friends’ Central School in Wynnewood for interior and exterior shots of the fictional school. The film itself was written by David Brind, an advisory council member at the Bryn Mawr Film Institute, and a ton of other places on the Main Line and in Philly were featured in the film, including the now-shuttered Ardmore MilkBoy.

Bryn Mawr College strikes again as the fictional Grey College, where Luke Wilson plays a professor weirdly obsessed with offing his biggest competition for tenure in the English department. Other scenes were shot throughout the Garrett Hill neighborhood in Radnor, Delaware County and at Lower Merion High School and Rosemont College.

Much of this sad love story starring Ryan Gosling and Michelle Williams was shot in Scranton, but the location of the very memorable Star Gazer Fantasy Suite hotel scenes were shot at the Radisson Valley Forge, where the spaceship-themed room was not a film design. There are, in fact, 15 fantasy suites to choose from in KOP, but hopefully your stay won’t be as tumultuous as Ryan and Michelle's.

Around the same time “Silver Linings Playbook” dominated the Llanerch Diner, Dawson Leery James Van Der Beek produced a locally shot film about rowing that will look hella familiar to anyone who has ever seen Boathouse Row. Sarah Thomas, who starred in and wrote the film, is originally from Haverford, and it shows life on the Line as well as rowing scenes along the Schuylkill. Though the movie premiered in Philly and was showcased at several indie theaters here, it’s often overlooked because most sports-related movies taking place in Philly evoke the name of one Rocky Balboa.

While there are tons of other films stretching back decades that have been featured near Philly – this list hasn’t even scratched the surface of all of cinema’s Atlantic City-based films – a couple others in nearby counties are also worth a mention.

In this knock-off version of "Dead Poets Society," Brendan Fraser plays a football star who has to hide his Judaism from his grossly anti-Semitic 1950s prep school crew, led by Matt Damon and Anthony Rapp, the guy who would go on to star in the original Broadway production of “Rent.” Filming was scattered around Pennsylvania and Massachusetts, with shots of the steel plant in Bethlehem, Pennsylvania, in the opening scenes to show Fraser’s rugged blue-collar upbringing before shipping off to boarding school.

The biographical drama starring Winona Ryder and Angelina Jolie generously featured an abandoned building in Harrisburg as the spooky setting for the 1960s mental institution where the majority of the film takes place. Other shots were also filmed in Lancaster, particularly on Pine Street close to Franklin & Marshall College.

Though it already premiered at the Toronto International Film Festival, the comedic drama starring Kevin Hart, Nicole Kidman and Bryan Cranston will launch in the U.S. early next year. You can expect The Kimmel Center, Dilworth Park and other Philly landmarks to be featured in this locally shot remake of the 2011 French film "The Intouchables."