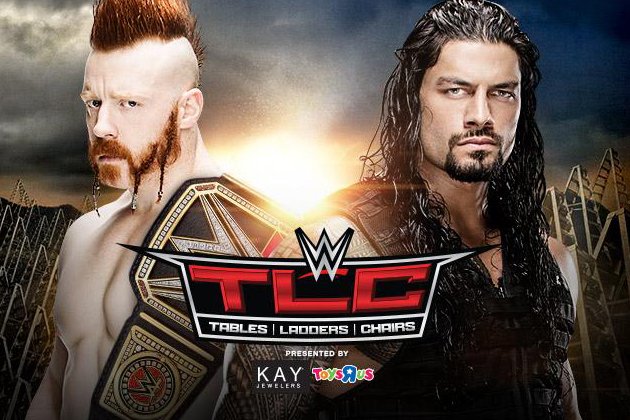 Twenty-four hours before WWE invades Philly for Monday Night Raw, the company’s superstars will be in Boston, MA for the annual TLC pay-per-view. TLC may be one of the more exciting events of the year solely based on the match stipulations. Who doesn’t love tables, ladders or chairs? And who doesn’t love when they’re used in a single match?

With Roman Reigns and Sheamus building a nice feud, for all intents and purposes, in the wake of Seth Rollins’ devastating injury, it still feels awkward that the two will battle it out for the title with a stipulation like a TLC match. There will be a plethora of title matches, though, and a match I’m excited about – an elimination tables match featuring the Dudleys, Tommy Dreamer, Rhyno and the Wyatt Family. The card looks great on paper.

Here’s how I see TLC playing out on Sunday night:

We just saw this match on both Raw and SmackDown recently, and not to mention the fact that these guys had a short feud earlier this year that wasn’t that great, so what does WWE do? Book them in a pay-per-view match, of course!

The storyline heading into this match is that Rusev is now using Lana as a pawn to try to get the upper hand on Ryback. Two matches in a row, Lana was in the middle of the controversy, practically blaming Ryback for pushing steel steps into her thigh and her rolling her ankle. Of course, the whole ankle thing was an act and Rusev laid out Ryback and put him in The Accolade.

This match could have been built worse, so at least there’s that. I just don’t think there’s anyone that wants to see this match anymore. And I’m one of them. The babyface goes over here.

This one’s a weird one to predict. Charlotte has shown some heelish tendencies lately, and it couldn’t come at a weirder time. We’re all supposed to now forget Paige ever brought up Reid Flair in a promo before their previous title match at Survivor Series.

Now, Charlotte and Becky Lynch have more problems between themselves than Charlotte and Paige apparently. It’s so confusing, and this rematch may be one of the more buried rematches in recent memory. Is WWE completely over the Charlotte/Paige experiment? Possibly. What we truly need is a Charlotte/Sasha Banks feud, but what do I know?

What I do know is Charlotte will retain on Sunday night.

The New Day (c) vs. The Usos vs. Lucha Dragons

Week after week, the WWE Tag Team Champions find new ways to entertain us. They’re getting louder and louder pops – which unfortunately means they may be turning face soon. But, for now, they’re still heels and they’re still the best thing in WWE today, so why take the Tag Team Titles off of them?

Oh, unpredictability probably. WWE loves being unpredictable when the time doesn’t really call for it. This is absolutely one of those times. I have a very, very uneasy feeling that my boys will lose the WWE Tag Team Titles on Sunday night, but I’m going to hold out hope that they retain. The Usos have held the titles before and putting the straps back on them wouldn’t really mean a lot at this juncture, and the Lucha Dragons seem like that team that the crowd loves, but who will never win the Tag Team Titles, like The Rockers from the late 80s-early 90s. Yes, I know The Rockers technically won the titles from the Hart Foundation on Saturday Night’s Main Event, but the company doesn’t recognize the reign.

The New Day should only lose the titles to a team that’s way over and the fans want to see as champions. Right now, I’m not sure any team in WWE fills that description.

While I love the extreme aspect of this feud, I don’t see how a Wyatt Family loss means anything but certain death for this group. Many people, including myself, feel like the Wyatts are basically a joke now based on how they’ve been booked. They were booked in a glorified squash match at Survivor Series against the Brothers of Destruction, and now they’ve set their sights on the Dudleys and their friends.

I’m not so sure the Dudleys can’t afford a loss, either. They’ve cooled off considerably since returning to the company after SummerSlam, so do they need this win more than the Wyatts? Probably not. But, if they lose, they’ll fall into where the Wyatts are at right now. It’s a no-win situation for each team at this point.

D-Von told us earlier this week that his team plans to put somebody’s behind through a table. And I’m sure that’ll happen. But, the good guys will fall to the bad guys, and the Wyatt Family will finally, hopefully, have a convincing win.

This feud is actually a good one that makes sense – Jack Swagger returns to television to find his old manager, Zeb Colter, managing Alberto Del Rio and both of them creating a new nation called MexAmerica. While it took a while for the duo to really get in a groove with making the whole MexAmerica angle feel like a heelish one, Swagger returning to the fold for this feud actually makes sense and I love every bit of it.

Of course, Del Rio looks as jacked as ever since he’s been back, so there’s no way Swagger should win this match. With no disqualifications, I don’t think we even see Del Rio in a position to almost lose his title. It’s not nearly his time to let it go yet. He’ll win this one.

This is about as close as we can get to a dream match in today’s WWE. Owens and Ambrose could have a series of matches and each match would likely be better than the last. I’m not sure you can say the same thing about a series of Ryback and Rusev matches.

I’ve mentioned before how much I miss feuds that result in multiple title changes between two combatants or teams. I wouldn’t mind this feud being a throwback to the old feuds that resulted in a few title changes in a short span. Ambrose as Intercontinental Champion works right now as much as Owens as champion does. I don’t think WWE creative could go wrong here in deciding a winner. As long as it’s not the end of the feud between the two. Because I don’t think they have the guts to put the title on Ambrose, I’ll pick the champion to retain.

I think both of these guys have done a damn good job at creating a feud that means something. After Rollins got hurt, WWE was put in a bad, bad spot, but the company really had nobody else to blame but themselves. There was no top superstar to put the belt on, except for John Cena, who was set to take some time away from WWE to focus on other projects. There should always be a second or third top superstar in line to get the belt when the top superstar gets hurt. There clearly isn’t.

Sheamus isn’t a top superstar, and Reigns is kind of a week-to-week story in terms of him looking like a top star. He eventually will be the guy. The question is just when. But, he just pinned the champion on Raw this past Monday. In WWE’s world, Sheamus gets that win back on Sunday night.

Reigns and Sheamus have built a good foundation for a feud, but when we have a main event with a stipulation that all three – tables, ladders and chairs – are legal, and a main event that really lacks the blood feud storyline that’s made past TLC matches great, this one probably has the least of my expectations.

Does Reigns win Sunday night? I doubt it. It would be anticlimactic, especially since he technically already won the championship at Survivor Series. They’re not building to his first big title win anymore. The story now is Sheamus and building him back up before he drops the title. Can they salvage him? They haven’t done a terrible job so far. A win on Sunday may be the kick in the pants he needs to take that next step. And that’s what I think’s gonna happen.

All in all, I’m looking forward to this event, but I’m tempering expectations. The bar will be set pretty low, so I wouldn’t be surprised if they surpass it.

The night after TLC, the roster comes to Philly for Monday Night Raw. Yours truly will be in attendance, and I’ll have quite a unique Raw roundup on Tuesday morning. If you don’t want to miss out on Raw in Philly, you can still get your tickets here.

Who do you have winning at TLC?