From 'Game of Thrones' to 'Fleabag,' here are the 2019 Emmy winners 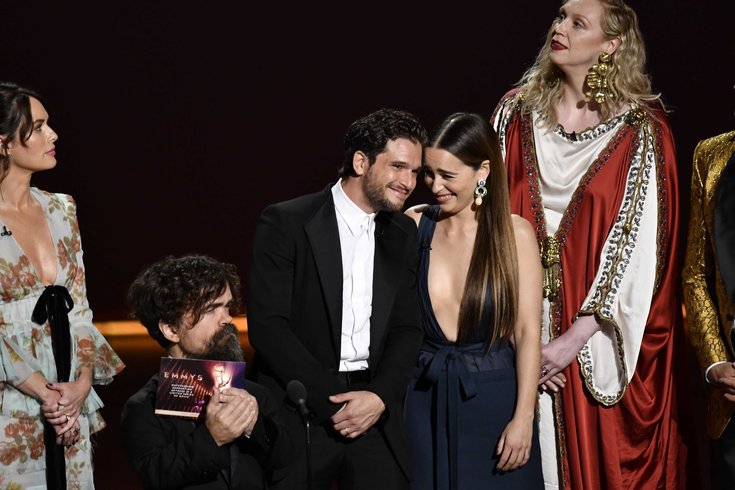 Kit Harington and Emilia Clarke join members of the cast of 'Game Of Thrones' during the 71st Emmy Awards at the Microsoft Theater. The show won 12 awards, including best drama series.

"Fleabag," the British comedy-drama, won the most awards for a comedy, with creator and star Phoebe Waller-Bridge taking home best actress, and the show getting wins for best writing, best directing, and best comedy series.

Michelle Williams won best actress in a limited series for FX's "Fosse/Verdon." In her acceptance speech, she not only thanked FX for giving her equal pay but encouraged others to do so, too.

"Next time a woman ⁠— and especially a woman of color, because she stands to make 52 cents on the dollar compared to her white male counterpart ⁠— tells you what she needs in order to do her job, listen to her, believe her."

Jason Bateman won best directing in a drama for Netflix series "Ozark," beating out three nominations for "Game of Thrones," including an episode directed by creators David Benioff and D.B. Weiss. No one was more surprised than Bateman, and Twitter had a bit of a field day with his shocked reaction.

Other winners included a posthumous award to Anthony Bourdain for "Parts Unknown," Bill Hader won best actor in a comedy for "Barry," and "Last Week Tonight with John Oliver" won best variety talk series and writing for a variety series.

Here is the full list of winners for the 71st Emmy Awards Show:

Directing for a Drama Series

Writing for a Drama Series

Director for a Variety Series

Writing for a Variety Series

Writing for a Limited Series, Movie or Drama

Directing for a Limited Series

Jharrel Jerome, “When They See Us”

Director for a Comedy Series

Writing for a Comedy Series

“Live in Front of a Studio Audience: Norman Lear”(ABC)

Directing for a Reality Program

“State of the Union”

Chris O’Dowd, “State of the Union”

Rosamund Pike, “State of the Union”

Directing for a Variety Special

Writing for a Variety Special