How 'Between Two Ferns' became a Netflix movie

Director Scott Aukerman and actress Lauren Lapkus explain how, with Zach Galifianakis, the viral web series was turned into a star-studded film. 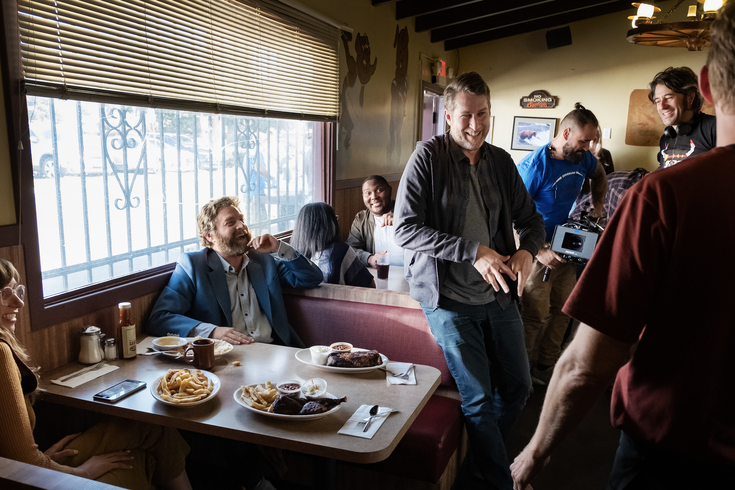 Courtesy of Netflix /for PhillyVoice

Lauren Lapkus, Scott Aukerman and Zach Galifianakis on the set of "Between Two Ferns: The Movie"

"Between Two Ferns," the web comedy series in which actor Zach Galifianakis interviews a famous person and asks them awkward, uncomfortable and passive-aggressive questions, has been a viral sensation ever since it debuted back in 2008.

That was the same year Galifianakis broke through as a movie star in "The Hangover." Now, "Between Two Ferns" is becoming a movie; it became available to stream on Netflix on Friday.

The film's director Scott Aukerman, who also co-created the series, and Lauren Lapkus, an actress in "Between Two Ferns" are both major figures in the world of podcasting, and they're bringing a live stage show to The Kimmel Center in November.

RELATED: What to stream on Netflix in September: 'Between Two Ferns' movie; Sacha Baron Cohen series, 'The Spy'

"Between Two Ferns," the series, got its start when Galifianakis and Aukerman were looking for a video project to do, and they realized both of them had hosted low-budget public access TV shows when they were younger.

"All he had was the title, 'Between Two Ferns,'" and that made me laugh really hard, because I knew coming from public access, they don't have a lot of set design, and at most they'll just have two giant plants there, in order to add some color to the frame and fill it up" Aukerman told PhillyVoice recently.

The idea was included in the pilot episode of a sketch show called "The Right Now! Show," which never reached the air, and was later taken to Will Ferrell and Adam McKay's Funny or Die comedy website. This led to much viral fame, a Comedy Central special, and even an episode featuring the then-President of the United States Barack Obama talking about health care.

And now, it's a Netflix movie, which marks Aukerman's feature-length directorial debut. He has previously directed TV episodes and specials before. 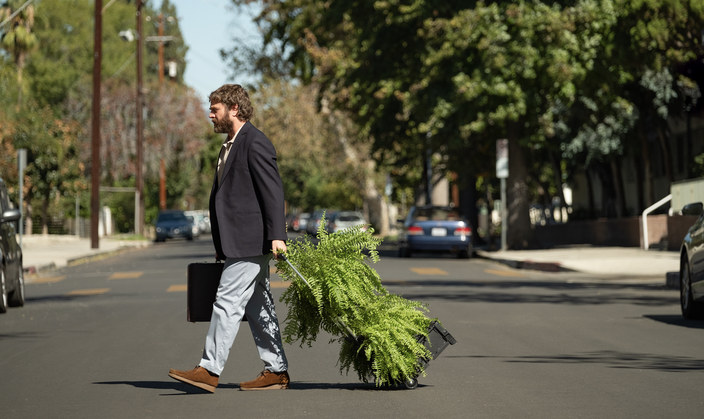 Zach Galifianakis in “Between Two Ferns: The Movie”

"I don't think that either of us were like, 'Hey these videos need to be a movie, they deserve to be a movie,'" Aukerman said. "I think it was more about the process for us, we really enjoyed doing the videos and improving the videos." After the Comedy Central special, "We said, 'You know, it would be fun to do a movie like this ... So we said if we could do a movie that just had this energy, where we could run around and have fun all the time, it would be really fun to do."

The director added that when "Between Two Ferns" debuted in 2008, Netflix was "just a company that mailed me the first disc of the "Freaks and Geeks" box set, and I held on to it for two years." Aukerman also noted that Galifianakis was part of the 2005 comedy film "The Comedians of Comedy," which was one of the streaming platform's very first original projects.

Lapkus plays Carol, the assistant to Galifianakis who accompanies him on the road trip.

RELATED: 'Hamilton' stars get to walk in footsteps of the real Alexander Hamilton with Old City tour

"She's really a hard-working, professional sort of person, who just cares about Zach and wants him to succeed," Lapkus told PhillyVoice.

The film, full of improv veterans, was largely improvised, although it did have a script, while Galifianakis and Aukerman share "story by" credit.

At one particularly funny moment in the movie, Lapkus plays a trumpet, which she said she'd never done before.

"I think it was just supposed to be a weird thing that I pull out of my bag," Lapkus said of the trumpet bit, which was part of an extended running gag where she seems to have endless things in her bag.

"Between Two Ferns: The Movie" expands the sketch, which is normally around five minutes per episode, all the way up to the 80-minute mark. The plot of the movie has Galifianakis having to travel cross-country in order to settle a debt with Will Ferrell (playing a villainy version of himself), and produce new Ferns shows along the way.

The movie, while bringing the concept into the real world, also offers several of the uncomfortable celebrity interviews with which Ferns is associated; the victims this time are the likes of David Letterman, Matthew McConaughey, Paul Rudd, Brie Larson, Jon Hamm and University of Pennsylvania alum John Legend.

The movie, unlike the series, features a closing credits gag reel with those actors cracking up at Galifianakis' questions. 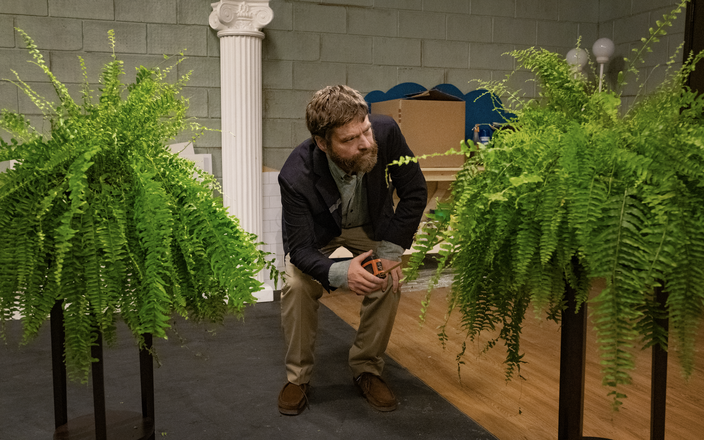 Zach Galifianakis and the titular ferns in “Between Two Ferns: The Movie”

Fans of "Orange is the New Black" will remember Lapkus for playing prison guard Susan Fischer in the show's early seasons, and then returning to the role in the recent final season.

"When I first got that job, I obviously had no idea it would be such a hit show," Lapkus said, adding that she's often recognized in public for the role. She enjoyed having the chance to come back for the last season, and to "put a bow" on the character's arc.

Aukerman is known for his podcast, "Comedy Bang Bang," which consists of well-known actors and comedians spending whole episodes as original fictional characters. Lapkus often appears on that show and has launched her own popular podcast, called "With Special Guest Lauren Lapkus."

Aukerman and Lapkus will both be part of the "Comedy Bang Bang Live" show at the Kimmel Center on Nov. 11, when they'll be joined by comedian, podcaster and Philly-native Paul F. Tompkins, along with a guest star to be named later.

Lapkus said that she became part of the overlapping scenes of comedy and podcasting in Los Angeles.

"It's really fun, having done improv on stage, where it can only last for a few minutes and then you never see it again, or get to relive it, it's really gratifying to do characters on podcasts because people get to relive them."

"I think that podcasting has been sort of semi-legitimized," Aukerman said. "Now, when I say 'I have a podcast, I have only maybe 80% embarrassment when I say that. I think it's cool that I've been doing it for 10 years."

He added that he hopes the Grammys add a podcasting category, and predicted that by the time they do, he'll be an "elder statesman, who they're giving a lifetime achievement award to."

Lapkus, a native of the Chicago area, has enjoyed performing in Philadelphia in the past, including a recent show at the Good Good Comedy Theater in Chinatown.

"The crowds are really interactive. The crowds were wild, and I really enjoyed it, I thought it was really fun to talk to them. We brought a few people on stage who were a blast."

Aukerman has gone semi-viral in recent weeks for an odd reason – a series of tweets he wrote in 2016 about The Joker.

"There's almost something chilling about the character of the Joker – someone who finds the thought of crime to be funny," Aukerman wrote three years ago, in a message that's since been deleted but frequently archived. The tweet was in reaction to the 2016 movie Suicide Squad, but fits in well with the discourse surrounding next month's Joaquin Phoenix Joker movie.

"It was when Suicide Squad came out, and I was just laughing at everyone's reactions to caring about The Joker, and debating whether (Jared Leto) who was in it should be playing the Joker, and everyone was just taking The Joker so seriously," he said. Aukerman described the tweets, which he sent while in Australia, as "just taking The Joker so seriously, and how horrifyingly frightening that would be, if the Joker existed in real life."

"Between Two Ferns: The Movie" started streaming on Netflix on Friday, Sept. 20. Comedy Bang Bang Live is coming to the Kimmel Center Nov. 11.