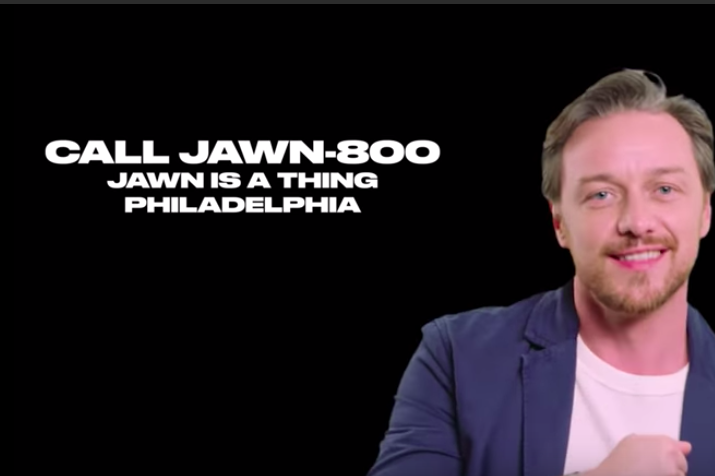 Scottish actor James McAvoy used the Philly slang term "jawn" in an interview with Jessica Chastain and no one knew what he was talking about — including a self-reported Philadelphian.

Apparently, Scottish actor James McAvoy knows Philly slang better than some Philadelphians. In an interview, the actor was shut down by a self-reported native who claimed the term "jawn" isn't "a thing." ...Come again?

McAvoy, who starred in M. Night Shyamalan's "Glass" and "Split," recently played a game with "It: Chapter Two" co-star Jessica Chastain called "Idiom Abroad" for LADbible. In this game, Chastain and McAvoy attempt to translate Scottish and American slang, respectively.

The actor seemed to have quite the handle on the American slang, correctly guessing most of the terms Chastain threw his way. He was so good, in fact, he was able to recall one specific Philly slang word that threw everyone else for a loop — the ever-beloved, "jawn."

"I've got an American one for you – 'Can you pass me that jawn?'" Chastain looks confused and says, "I've heard that's my jam?"

He chimes in, a bit proud of this slang term, "In Philly, 'jawn' can mean many, many things. It means 'thing.'"

While it's not exactly strange Chastain, a California native, doesn't know the term, things took a very odd turn when someone behind the camera says, "I'm from Philly, and that's not a thing."

McAvoy quickly discounts them, in true Philly fashion, might I add, and jokingly says, "Oh, f—k off."

The game takes a slight break so McAvoy can ask the "Philadelphians of the world" to back him up on "jawn" being a thing. We've got your back, James, don't worry. It's definitely "a thing."

Watch the whole interview below.