Prognosticators said Hillary Clinton held a large lead in the state ahead of Election Day in 2016, but ultimately did not win Pennsylvania or the election 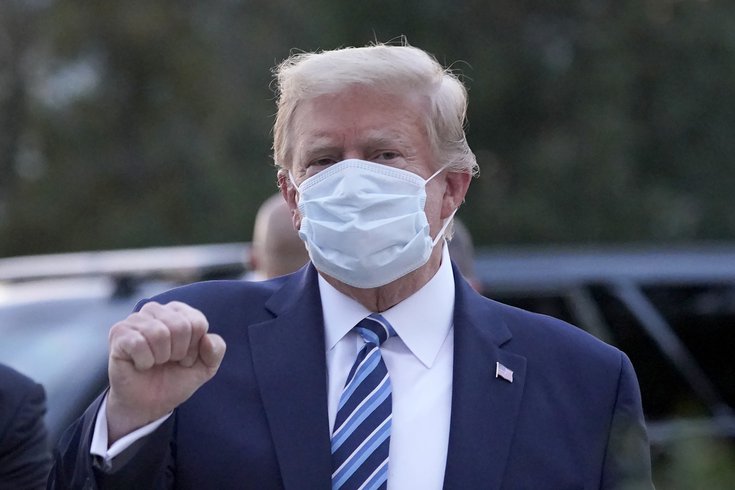 President Donald Trump, seen above about to hold a press conference outside the White House on Sept. 27, is trailing Democrat Joe Biden in Pennsylvania, according to the latest Monmouth University poll.

President Donald Trump took to social media earlier this week after a recent Pennsylvania poll showed his opponent, Democrat Joe Biden, is leading in what is projected to be key swing state in the 2020 Election.

In a tweet on Tuesday, Trump lashed out, pondering "How does Biden lead in Pennsylvania Polls when he is against Fracking (JOBS!), 2nd Amendment and Religion? Fake Polls. I will win Pennsylvania!"

How does Biden lead in Pennsylvania Polls when he is against Fracking (JOBS!), 2nd Amendment and Religion? Fake Polls. I will win Pennsylvania!

The president was reacting to the Monmouth University poll published Tuesday. It shows 54% of registered Pennsylvania voters, surveyed between Sept. 30 and Oct. 4 support Biden, compared to 42% support Trump. The poll found "little differentiation in vote preferences before and after the president revealed he has COVID-19."

However, 20% more people surveyed said they trusted Biden to do a better job combatting the coronavirus compared to Trump.

Biden was born in Scranton, Pennsylvania, and he spent part of his childhood there until his family moved to Delaware, which is where the former vice president established his political career, first at the county level and then as a U.S. Senator.

Pennsylvania is often regarded as a swing state in presidential elections, and in 2016 Hillary Clinton appeared to have a large lead over Trump in state's polling headed into Election Day. But Trump ultimately won Pennsylvania by just 1%.

As of this week, Biden leads in polling in six swing states, but skepticism remains among Trump and Biden supporters about about whether these polls will be indicative of the election results.

In reference to the president's tweet, during a CNN Town Hall on Sept. 17, Biden said that he saw no rationale to ban fracking right now. "(T)hose jobs that are out there, whether it's an IBEW worker, or whether it's an iron worker, or a steel worker ... What I'm proposing is that, you know, when Trump thinks about global warming, he thinks hoax. When I hear global warming, I think jobs," Biden said.

While most environmental advocates view Biden's stance on fracking as contrary to an agenda that would address climate change, Trump and his supporters paint Biden as a candidate too far left in the climate discussion.

The biggest drop month-to-month occurred among Republicans who responded they were "very optimistic" about the election's outcome – which had been at 51% percent in September and plummeted to 25% in the October poll.