Three for the show: Trio of local high school baseball players could go in first round of MLB Draft 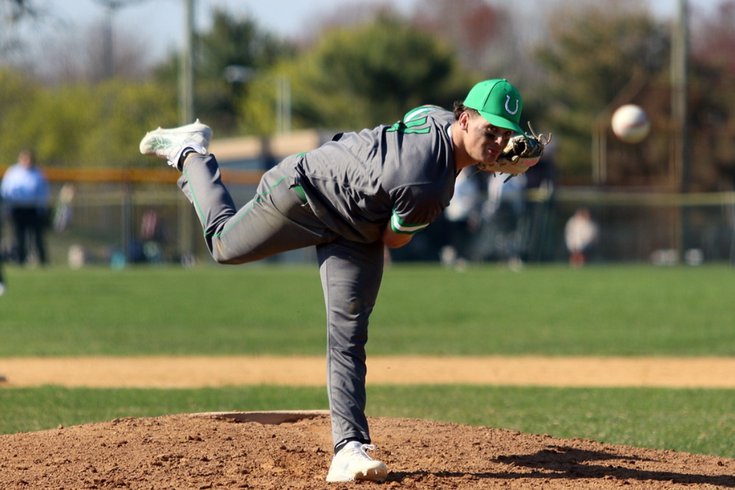 Mainland's Chase Petty could be one of three Philly-area high schoolers to be picked in the first round of the MLB Draft on July 11. The other two are Malvern Prep outfielder Lonnie White Jr. and Bishop Eustace pitcher Anthony Solometo.

One used to hit a ball from one end of his side yard to the other. It reached a point where the neighbors began complaining, because as he got older, he was hitting their homes across the street.

One was buried pitching on a national-level travel club and gave up six runs in his first appearance. He was offered to come back and get one inning in his next outing. He got two – striking out five of the six batters he faced.

One used to throw so hard at a fold-down, metal garage that it echoed throughout a local baseball field parking lot. It sounded like a sledgehammer hitting a metal spike. Now every time he pitches, he attracts a crowd, including a hoard of radar-gun-toting major-league scouts.

Malvern Prep's Lonnie White Jr., Bishop Eustace's Anthony Solometo and Mainland's Chase Petty are as disparate as they come. Though on Sunday, July 11, they could possibly have one thing very much in common: Each could be selected in the first round of the 2021 Major League Baseball First-Year Player Draft.

It would be unprecedented to have as many as three Philadelphia-area players taken in the first round of the MLB Draft, to the recollection of many.

"I think that says something about how the rest of the country looks at this area now," said Ben Davis, one of the Phillies' color analysts and the No. 2 pick in the 1995 draft by the San Diego Padres out of Malvern Prep. Davis is the highest any area player has gone in the draft.

"It was rare for anyone in the Northeast to get drafted that high back then," Davis said. "When I played, I played at Malvern and for Brookhaven Senior Babe Ruth, and we might have played two games a week.

"There are training facilities all over the place now. I had to shovel snow in December so I could hit in my backyard in the batting cage my father made (laughs). Overall, the level of baseball in this area is a lot better. These guys are playing all year round and they play for these national travel teams. These showcases have fields for kids I didn't see until I was in Class AA.

"The feedback I'm getting from scouts that I know say these three area kids are the real deal – and the numbers don't lie. That's what these scouts look for are the numbers."

White, Solometo and Petty are all 18 – and they will be looking down the scope of their futures in the coming weeks. 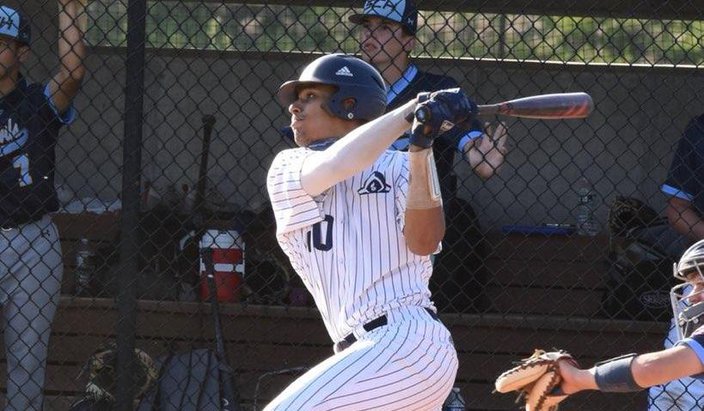 Lonnie White Jr. has an interesting dilemma – a win-win dilemma. He's bound for Penn State on a football scholarship, though White is also a muscular 6-foot-3, 210-pound outfielder whose first love was baseball before he became a standout wide receiver.

He used to hit for endless hours in the side yard of his family's home. He would toss the ball up and hit it, walk to get it, then hit it back. After a while, White began hitting the homes across the street – when he was 8. He also was meticulous, even in football, waiting to get the game film to work on the things he did wrong. He had his mother record his batting swing, so he could see his hand placement.

Davis, a 1995 Malvern grad, calls White a "high school Dave Winfield," a baseball Hall of Famer who was drafted by MLB, NFL and NBA teams.

"Everyone at Penn State is telling me to follow my heart, and I discussed this with coach (James) Franklin (Penn State's head coach) and he wants me to do what's best for me," said White, who finished his senior year hitting .395 with 11 doubles, five home runs and 25 RBIs. "I first began playing baseball. I just loved playing the game, playing outside by myself."

White tries not to look at the mock drafts, but he's projected to go in the latter portion of the first round. For those questioning his commitment to baseball, White originally had committed to Clemson for football, but switched to Penn State when they said White could play both football and baseball there.

For those who might doubt his power, at last year's Area Code Games, White hit a home run 421 feet to dead centerfield off Indiana-commit Luke Hayden.

One ESPN mock draft had White going to the Minnesota Twins with the No. 26 pick, another respected mock had him going No. 29 to the defending World Series champion Los Angeles Dodgers.

Many experts call White one of the most physically gifted athletes in the draft.

White is being compared to Dodgers outfielder Justin Upton and the San Diego Padres' Tommy Pham.

"It is a lot to think about," White said. "I could go either way. My goal is to be in the NFL or in the majors, either one. I want to get my education, that's important to me and my family. I love playing both football and baseball. I will admit, I love playing baseball. I always have.

"I'm hearing first and second round from some people. I spoke to the Phillies' scouts (who pick No. 13). I'm taking this whole thing in, and trying to enjoy the moment. It's frustrating, too. There is a lot going on and a lot to think about." 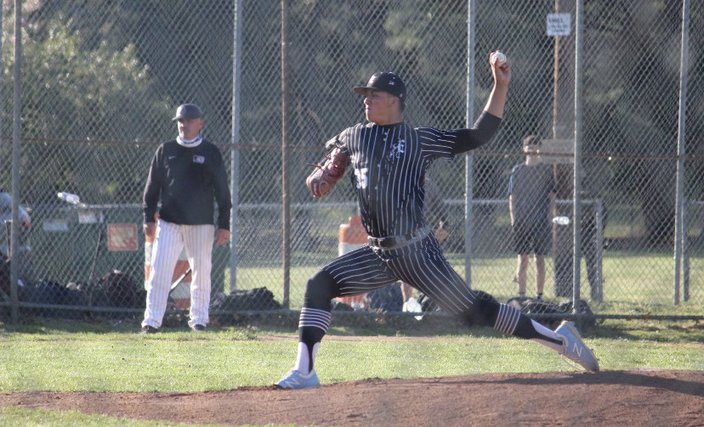 A few years ago, on a Friday at the Area Code Games, Anthony Solometo may have thought none of this was possible. He just got shelled on a national stage. He was supposed to close, and he gave up six runs and was pulled before the inning was over. Everyone looked at him as if he just died on the field – that they would never see him again.

Solometo reached the dugout, where his manager asked him a question that he already knew the answer to – if he wanted to go back on Monday to pitch again. Solometo didn't mope. He rooted his teammates on the next two days and returned Monday.

That's when he struck out five of the six batters he faced, and picked off the one hitter who reached base.

The 6-foot-5, 220-pound, left-handed North Carolina commit said that changed everything. It showed him he belonged.

"I remember the car ride back to the hotel after I got shelled, and I remember not saying anything and hated what happened," recalled Solometo, who went 5-0 this past season for Bishop Eustace in Pennsauken. He had 64 strikeouts with just five walks in 32 2/3 innings pitched and an amazing 0.21 ERA. "I told myself after I got back to the hotel that I belonged. The next time I pitched, that convinced me.

A Gloucester Catholic transfer to Eustace in his junior year, Solometo is projected to be drafted as high as No. 13 to the Phillies in one mock draft, and MLB's most recent mock draft has Solometo going No. 19 to the Toronto Blue Jays, saying "Some teams consider Solometo the best left-hander available."

What should also push Solometo over the top, aside from ability, is his character.

"Anthony has been with us the last two years, and I knew he was excellent before he came to us, winning a state championship at Gloucester Catholic," Eustace's veteran baseball coach Sam Tropiano said. "I've heard from every (MLB) team. He throws 94, 95 mph, and he can move the ball in and out. What sets Anthony apart is his Major League composure.

"He sits at the end of the dugout, totally focused on what he has to do. He doesn't talk to anyone, and no one talks to Anthony when he's pitching, because he usually has a no-hitter going and no one wants to talk to him. But I have to include this – when Anthony isn't pitching, he's the loudest kid on the bench, losing his voice by the end of the game cheering on everybody.

"He's just a great kid. If he winds up at North Carolina, that's fine. But he's never going to get to North Carolina. What nobody measures, too, is his character."

When Eustace senior second baseman Danny Obermeier broke his thumb, ending his season, it was Solometo who asked to change his jersey number before a tournament to Obermeier's, in honor of his teammate. When the Eustace batboy, 12-year-old Franco, lost his father to pancreatic cancer, it was Solometo who gathered his high school teammates to show up to one of Franco's district games.

"Anthony is a good person who happens to be a baseball star, and a lot of times superstars, at the high school, college or pro level, are not like that," Tropiano said. "Anthony gets it and you have stars, grown men, who don't." 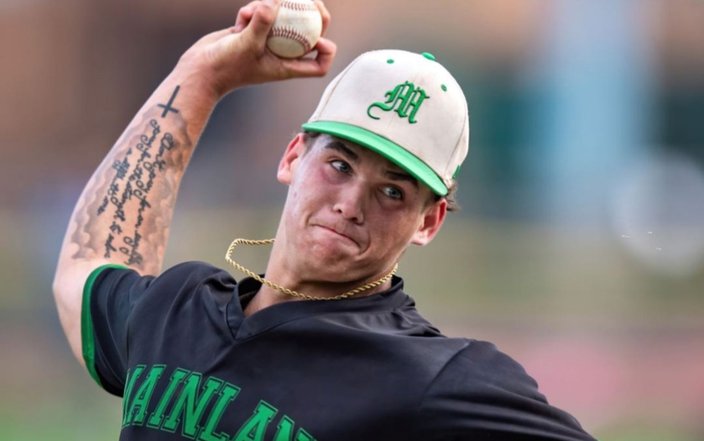 The ball was about as big as his hand when Chase Petty was 8. His father, Bob, would roll down the metal garage of the facility building by their field and let Chase throw against it. What harm could an 8-year-old do to a metal garage door, right?

The dents are still in it.

Chase Petty has been throwing gas since birth. The 6-foot-2, 190-pound right-handed pitcher for Mainland High School, in Linwood near the Jersey Shore, has been clocked at 102 mph — that's not a typo.

It comes at batters like a hissing snake – before it bites you.

Petty has been known to break a few things with his power.

"It's a little weird throwing 100, because I've been throwing hard since I was 12, and it always feels like the same," said Petty, a Florida commit who Baseball America ranked as the second-most athletic high-school pitcher in this year's draft and likely to go to the Dodgers. "At first, it was a little weird having people come a watch me. Through time, I've gotten used to it. This summer, I saw it every game.

"I know it's there, but it doesn't affect me any longer."

After Petty threw a bullpen session at the Carpenter Cup last week, Petty had a foot race with someone. It's who he is, it's part of his competitive nature.

"I'm anxiously waiting for it and I can't be happier about it. I see it as a win-win situation for me. If I go to Florida, I win. It's a great school with a great program. If I'm drafted in the first round and I sign, I win there, too. I take peeks at the (mock) drafts, and I like to see where people have me.

"I look at it and then I'm over with it. When the ball releases my hand, I know there's something behind it."