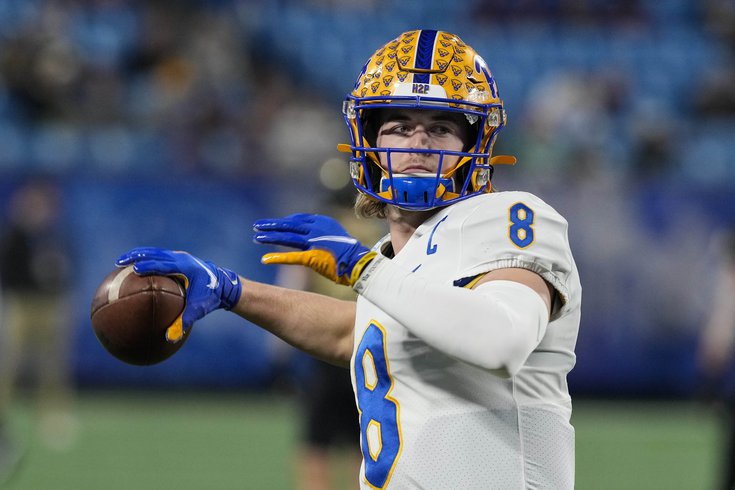 The Eagles would probably like to see quarterbacks like Kenny Pickett (shown) or Malik Willis get taken early.

With the 2022 NFL Draft less than a week away, let's take a look at some of the peripheral rooting interests that Philadelphia Eagles fans should be paying attention to, aside from the Birds' own picks.

Eliminating competition for quarterbacks in the 2023 draft

If the Eagles take a quarterback in the first round of this draft, it will have been impressive deception after having traded away one of their three first-round picks and enthusiastically calling Jalen Hurts their 2022 starter at every possible turn.

The quarterback class in the 2023 NFL Draft is likely to be a whole lot better than this one. If Hurts fails to make major strides this season, the Eagles will surely be in the mix for a new quarterback next year. Whether you're a Hurts guy/gal or not, the team is better off punting on quarterback in this draft and waiting for the better crop either way.

If that is indeed the plan, they'll have competition next year. While the Eagles have two first-round picks already in 2023, so do four other teams:

Oh, and of course if quarterbacks get picked early, that'll push more attractive positional players down the board to the Eagles.

The Eagles own the Saints' first-round pick in 2023, so the worse New Orleans is in 2022, the better it is for the Eagles. #Analysis.

The Eagles' perceived reasoning for trading one of their first-round picks this year essentially for a 3 this year, a 1 next year, and a 2 in 2024 was pretty straightforward. They now have legitimate ammo to try to land an elite quarterback prospect next year, if need be. The Saints' plan is harder to see. Are they trying to parlay those picks into a quarterback, or do they really think that they're just a couple players away from contention. If it's the latter, they could be in the market for a left tackle and/or a wide receiver.

While a rookie LT and a new WR probably isn't enough to make them a Super Bowl contender, it would still probably make them somewhat better in 2022, which, for the Eagles' purposes, isn't ideal. If the Saints draft a quarterback from this class, he wouldn't necessarily be an immediate upgrade on Jameis Winston.

In other words, from the Eagles' perspective, the Saints would be another ideal landing spot for a quarterback.

Washington isn't likely to draft a quarterback in the first round, but it would be funny if they took one in Round 2 just for the Carson Wentz jokes.

That aside, I think that there are more than a few Eagles fans that hope Notre Dame safety Kyle Hamilton falls in this draft so the Eagles have a chance to take him. For you Hamilton fans, be careful what you wish for on that one, as he might land in the division with Washington picking 11th.

The Giants have been mainstays at the top of the draft in recent years because they are tied for the worst record in the NFL over the last five seasons. They blew many of those picks.

• 2018: Saquon Barkley was an elite talent, but taking a running back with the second overall pick was beyond dumb.

• 2019: Drafting Daniel Jones at sixth overall was an obvious reach at the time, and Jones has predictably not yet lived up to his draft slot.

• 2020: The Giants had their choice of an impressive group of offensive tackles, and while Andrew Thomas was much better in 2021 than he was as a rookie, the Bucs got the star OT in that draft in Tristan Wirfs, at pick 13.

The one good move the Giants made in the first round during the Dave Gettleman era was last year, when they traded back from pick 11 to pick 20, while picking up the Bears' first-round pick in 2022. The Bears had a miserable 2021 season, and that pick wound up landing at seventh overall.

The Gettleman nightmare is over for Giants fans, and Joe Schoen is the new GM. Having come from Super Bowl-contending Buffalo, Schoen no doubt recognizes that the Giants' roster is straight garbage at the moment, and I would imagine that he would be interested in moving out of that seventh overall pick for a bounty of picks in 2022 and beyond.

The Eagles would probably not like to see some dumbass team make an ill-advised move up for their pick like the Bears did a year ago. You should be rooting for the Giants to just stick and pick, in my opinion.

The Cowboys' offensive line was once among the best in the NFL. That's no longer true, and the two remaining stars from that unit — Tyron Smith and Zack Martin — have played a hell of a lot of snaps over the years.

As such, in most mock drafts, you'll see the Cowboys taking an offensive lineman, oftentimes reaching for one. The Cowboys' success rate in the first round has been better than most, simply by taking the best player available.

It'll be interesting to see if the Cowboys are willing to go against what has been successful for them by passing on a better player to fill a major need. If they take an offensive lineman, there's a good bet that that guy will not have been the best player available.