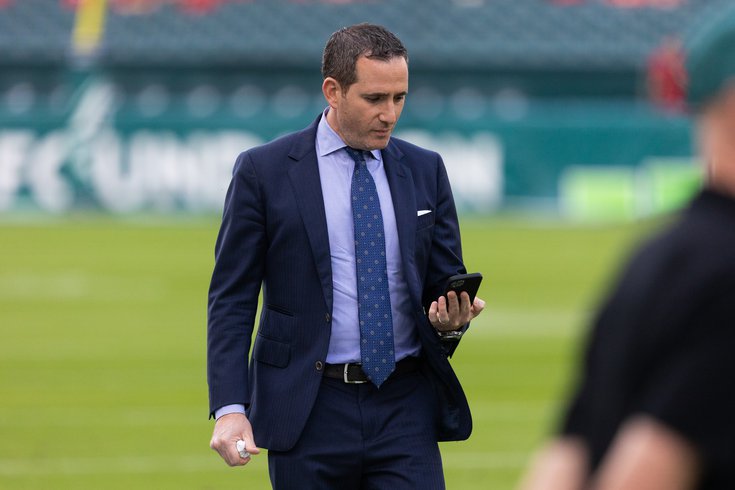 In speaking with reporters ahead of the NFL Draft on Wednesday, Howie Roseman spoke about the exploding wide receiver market around the league. Big-name (and big-money) wideouts are moving around the league and signing huge contracts. Davante Adams heading to Vegas and Tyreek Hill going to South Beach were the tipping point. Stefon Diggs now has a mega deal in hand in Buffalo. D.K. Metcalf moving on from Seattle is constantly talked about as the next domino to fall in the receiver carousel.

ESPN's Tim McManus, asked Roseman about this "boom" at the receiver position. Here's how he responded:

I think every year a position kind of becomes, I like that word, the "boom," it's like the new mining town, right? You have pass rushers, you have offensive linemen and now you got wide receivers. And so, I think at the end of the day, we talked about this a little bit when we were at the league meetings... you have got to make a decision on what your priorities are on building the team and whether you're kind of going to go with the flow or you're going to kind of figure out what's the most important thing for your team. And if there's some value in being different and figuring out what now is kind of the next area...

Coach [Nick Sirianni] and I talk about this all the time. If we're going to be the same as everybody else, we're probably going to finish in the middle of the pack. And sometimes, you got to take risks and you got to kind of stand out there and do something different than everyone else...

That doesn't mean there aren't right decisions to make at that position, but, at the same time, if you're doing the same thing everyone else is doing, you're probably a step late.

Roseman isn't one to lay his cards on the table, running a front office that is low on leaks and tight on information. While he doesn't give a definitive answer, it can be inferred that Roseman understands what's happening at wideout across the league. The Eagles have frequently been ahead of the curve on salary cap and team-building trends. If Roseman foresees the WR market continuing to explode like it is currently, putting big resources into receiver yet again the draft makes sense.

Yes, taking another receiver in the first round of next week's draft would be the third time the Birds have done so in as many years. I don't care. Jalen Reagor is a sunk cost and can no longer be viewed as a first-round player. DeVonta Smith's got the goods. Add another young budding star who'll be under contract for the next five years and the Eagles will maximizing both talent and salary cap flexibility.

Though I don't agree, I've seen talk on Twitter amongst NFL writers that wide receivers are becoming the new running backs. Thought process is that legit talent can be found well into Day 2 of the draft and consistently restocking rosters with those young guys allows teams to let receivers otherwise walk in free agency for big contracts elsewhere. The point does stand though that hitting on receivers in the draft, when players at the position are producing immediately in the NFL, leaves teams with cost-controlled contributors. That, in turn, allows franchises to stack the other pieces on their rosters correspondingly.

Still, I'd rather just have a bunch of talented wideouts to aid a quarterback, whether's that Jalen Hurts or someone else. Going total bargain bin on receiver is how you wind up with the 2018-2020 Philadelphia Eagles.

I'm sure this article will be irrelevant when the Eagles inevitably trade for Deebo Samuel in the next 24 hours though.