After an impressive seventh straight win in Washington Tuesday... 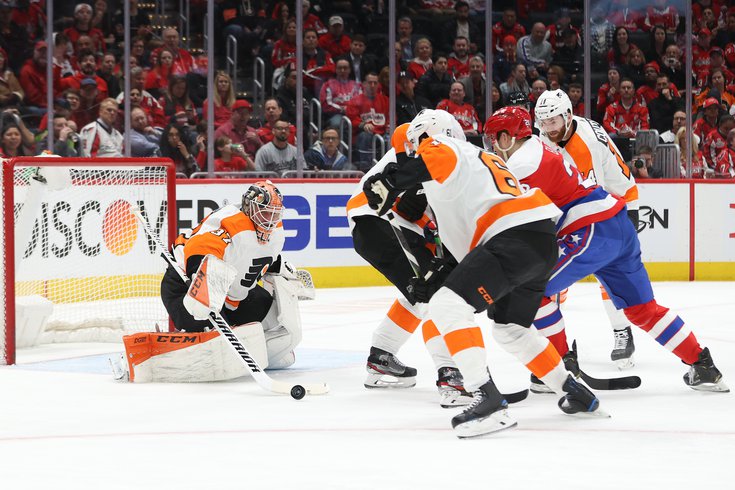 The Flyers held their own against the Capitals in Washington Wednesday.

You will probably hear this a few more times over their next 16 games, but Wednesday's battle against the Capitals was the most important game of the Flyers' season.

In winning their seventh straight game, the Flyers have toyed with opponents all across the NHL, outscoring them 41-15 during the impressive stretch. None was more impressive than their 5-2 win in Washington, as Philly inched closer to having the top seed in the toughest division in hockey.

As it stood Wednesday night, the Flyers are a single point behind the Capitals for the best seed in the Metropolitan Division. Back in January, they trailed Washington by 15 points.

The offense, defense and special teams all flexed in the victory, continuing momentum the city has not seen on ice in quite some time.

The Flyers won't have much time to bask in their most recent success, as they will hop on Amtrak and head home with a quick turnaround before tomorrow night's game against the Kings at the Wells Fargo Center.

Here are three takeaways we had from the 'W' in D.C.:

There is something about the second. Philadelphia, heading into Wednesday's game, had outscored its opponents by 12 goals this season in the second period, and added two to that margin. The team has 720 shots on goal in the period — the most of any period.

Tyler Pitlick got the Flyers' third goal (from Michael Raffl), in a dominating second period but it could have been scored by anyone. The team fired 18 shots on goal and had power play after power play (more on that in a bit) as they turned what looked kind of like a boring, slow paced stinker to a really impressive performance against one of the best teams in the NHL.

It was as if someone lit a fire under the Flyers before they hit the ice, as they controlled the puck with deliberate conviction, creating a seemingly endless stream of scoring tries.

Additionally, the period contained two pretty exciting fights, the second of which came after a hit to Giroux and wound up sending Tom Wilson to the box for 10 minutes:

The decision to start Elliott over Carter Hart drew some questionable glances, but despite Hart's recent success (mostly at home), the nod going to Elliott makes sense. He's a veteran, and Hart has been, well, brutal away from Philadelphia. Clearly giving Hart the start tomorrow at home was the preference here.

It's always hard to be unbeatable against a team like the Capitals, and Elliott was hardly perfect, but his 24 saves were enough to get the job done — several of them in high danger situations and in key spots throughout the game.

Elliott got his first start since way back on February 20, (a win in Columbus) and stood strong through two stellar Flyers penalty kills early, but he was beat for the first goal of the game near the end of the first, as Lars Eller won a race down ice and put Washington up 1-0.

Nearly 20 minutes later, a Scott Laughton turnover spelled more doom for Elliott, who relented half of the Flyers' two goal lead to Garnet Hathaway to quickly undo the hard work done in the second frame. Philly got the lead back to a pair in the third, after Jakub Voracek flashed some speed to set up Ivan Provorov streaking alongside him. It was Voracek's seventh assist in three games.

It's worth noting, defensively as a whole, the Flyers held the Caps to an 0-for-5 blanking on the power play while limiting them to just 26 shots.

It's hard to remember the last time the Flyers looked as good as they do right now on the power play. Wednesday, the crew scored for the eighth game in the last nine with the man advantage.

In each of their five chances, the Flyers put the Caps under incredible pressure. They look in control, and are able to generate an impressive number of high quality scoring chances.

In the second period things got a little crazy.

The call on the ice was inconclusive, and the Flyers stayed down 1-0 in the second. It ended up not really mattering, as the Flyers did find the back of the net later on the same power play, as a rebound right in front of Travis Konecny was fired into the open net to tie things at 1-all.

Later in the second, a ferocious attack with an extra man had the Flyers close to scoring time and time again. Until Kevin Hayes was able to take a fortuitous "redirect" off the skate of Derek Grant to slide the puck behind Holtby, putting Philly up 2-1.

It wasn't on a power play, but we kind of ran out of space in this article so we'll throw the late third period insurance goal by Scott Laughton down here to send you off on a good note:

Laughton's 13th goal of the season is our 12th scored in DC this season. #PHIvsWSH | #NowOrNever pic.twitter.com/zsmsYd1IbM