What they're saying: Is Vigneault the Coach of the Year? What has been key to Flyers' recent success? 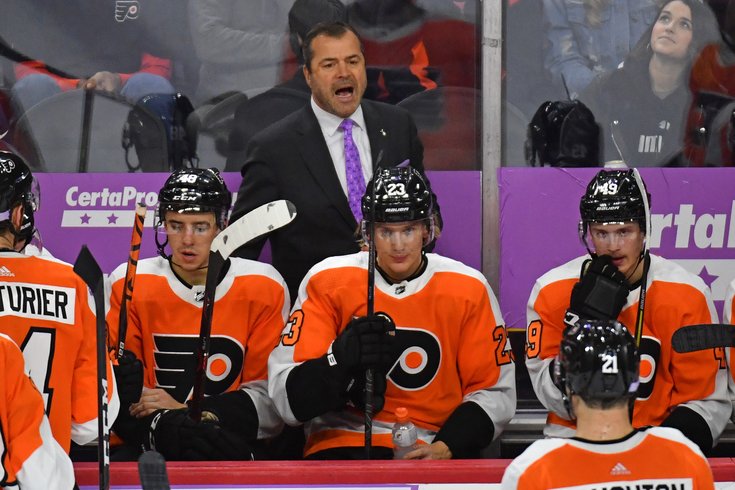 The Flyers are red hot — and their recent win streak couldn't have come at a better time as the Orange and Black have quickly climbed the standings in the Metropolitan division and would currently have home ice advantage in the first round of the playoffs after winning five straight games.

With their 5-2 home win over the Rangers, who had also been playing lights out lately, the Flyers (37-20-7) climbed past the Penguins and into second place in the Metro, and their 81 points are now just three behind the Capitals for first place in the division — and just four behind the Lightning for the second spot overall in the Eastern Conference.

Over their last 10 games, the Flyers are 8-2, tied with the Rangers as the best record over that span in the Eastern Conference. It's also the second best in the entire NHL, with only the Vegas Golden Knights' 8-1-1 record ahead of them.

Throughout their rapid rise up the East standings, the Flyers have been getting contributions from several key players, including longtime captain Claude Giroux and the team's big offseason acquisition, Kevin Hayes.

With just 18 games left to play, this team is suddenly looking like a real contender — and their next test will come on Sunday as they travel to New York for a rematch against the Rangers, who are currently two points outside of a playoff spot, at Madison Square Garden.

Can the Flyers turn things around on the road, as currently only eight teams in the entire NHL have fewer road wins than Philly? Can Giroux and his fellow stars continue to deliver? Will Carter Hart be able to handle the pressure as the season hits its most critical point? And how much credit does Alain Vigneault deserve for his team's success?

We'll cover all that and more in today's Flyers edition of What They're Saying...

I'm not sure how Alain Vigneault takes his martinis, but the Flyers head coach deserves as many as he'd like after the job he's done turning his team around this season. Last year, the Flyers finished with just 37 wins and 82 points. They've already matched that first number and with their next point, they'll match the second ... with 18 games left to play.

More importantly, the Flyers were 22-15-6 after an overtime loss to the Hurricanes on Jan. 7. At the time, they were on the outside of the playoff picture and things weren't looking great. In the nearly two months since, the Flyers have gone an impressive 15-5-1 and are playing their best hockey of the season. Most importantly, however, the team seems to have gotten over its road struggles, as they've gone 5-2-1 away from the Wells Fargo Center over that span.

And if Vigneault can keep his Flyers playing at this pace for the remainder of the regular season as they head into the playoffs, he deserves some strong consideration for NHL Coach of the Year. Here's more from Sam Carchidi of the Philadelphia Inquirer:

The Flyers missed the playoffs and finished with 82 points last season. They are now on pace for 104 points, putting Vigneault in the coach-of-the-year discussion.

If the Flyers finish ahead of the Penguins — who have overcome a slew of key injuries — and Columbus fades and doesn’t make the playoffs, it’s possible Vigneault and Berube emerge as the top candidates.

Vigneault doesn’t care about the accolades. He just wants to finish high in the standings and get into the playoffs, “where anything can happen.”  [inquirer.com]

The Flyers' worst loss of the season may have come back on February 6, when Philly lost to the Devils, 5-0, at home. Since then, however, Giroux has been filling up the stat sheet on a nightly basis. Could some of that be attributed to Vigneault pressing the right buttons to get his veterans to step up? Either way, it seems to be working, writes Anthony SanFilippo:

I’m not sure if it was the embarrassment of that loss, or coach Alain Vigneault publicly doubling down on the Flyers making the playoffs assuming their veteran players lead the way or simply Giroux deciding enough was enough, and it was time to flip the switch, but since then, Giroux has been everything the Flyers always expect him to be.

In the last 10 games Giroux has six goals and eight assists for 14 points, including a pair of tallies, one of which was the game-winner, in the Flyers’ 5-2 dismantling of the scorching-hot New York Rangers Friday night at Wells Fargo Center.

And it’s no surprise that the Flyers have gone 8-2-0 in those 10 games, have matched a season-best five-game winning streak and have now leap-frogged Pittsburgh into second place in the very tough Metropolitan Division.

“We’re only looking up,” said Giroux, when asked about how he looks at the Division standings. He sounds confident. He’s been laughing and smiling – a lot. It’s almost like these past three weeks have been cathartic for the Flyers captain, reminding him just how much fun playing the sport of hockey can be.  [crossingbroad.com]

Carter Hart didn't get off to a great start against the Rangers on Friday night, but the Flyers' young goalie didn't get rattled and bounced back in a big way to help Philly pick up the win. Tests like that are going to be important down the stretch, as Hart prepares for his first postseason action (assuming the Flyers make it).

He'll get the start again on Sunday against New York, which will be an even bigger test as he has struggled on the road. But at least he was able to build up some momentum on Friday in front of his home crowd. Here's more on his performance from Madeline Campbell of Broad Street Hockey:

Speaking of standout performances, Hart was right up there with Giroux and having a very solid game. We mentioned the slow start already, and while the Flyers did give up that early goal to fall into a bit of a hole, Hart was key in making sure that they didn’t fall even deeper into that hole and get into a position where they couldn’t come back in this game. He workload slowed a bit as the Flyers picked up momentum and spent more and more time in the Rangers’ zone, but he still made the big saves when they needed him to at the other end. At the end of that day, he’d stopped 26 of the 28 shots he faced, with the two goals given up coming from high danger shots. Which isn’t too bad if you ask us.

He did still give up the two goals, yes, but they’re not ones that we’re too fussed about—the first one had some weird bounces happening, and the second, you would’ve liked to have seen Hart get some help from the skaters so Brett Howden wasn’t able to park right on top of him in the first place. Maybe he could’ve made saves there, but they would have been difficult. And given the larger body of work from this game, we come away from it feelings pretty positive about his performance. He did his job and played a strong game, not much more to it than that.  [broadstreethockey.com]

Over at The Athletic, Charlie O'Connor's recap of the Flyers' Friday night win over the Rangers included his thoughts on where Philly stands among the NHL's best. And he thinks their right up there with them, at least for the last month and a half...

How did the Flyers do it? The ability to roll four lines and three defensive pairs and have each of them make a positive impact certainly helps. “I thought everyone played great tonight, especially Coots’ line,” Hayes said after the win, and he wasn’t wrong. Per Natural Stat Trick, no Flyers player posted a negative on-ice expected goals share at 5-on-5. This was the rare night when every skater was rolling.

In a way, this felt like a glimpse of the Flyers’ ceiling. They attacked off the rush, broke New York down via the cycle, outshot them, outchanced them and won 5-2 — a score that undersold the quality of the performance. It surely served as a reality check for the Rangers, who were reminded that — hot streak aside — they have work to do before they’re on the level of the best teams in the league. That’s not a typo — since around mid-January, the Flyers have been playing like one of the NHL’s best teams, and they’re showing no signs of slowing down.  [theathletic.com]

A matter of time

Hockey players sometimes take a long time to develop. They're a lot like baseball players in that way. And the emergence of Scott Laughton and other young Flyers has only proven that it's not just players, but teams that need time to develop. Finally, the Flyers seemed to have recognized this, which is why they've been hesitant to make any big trades in recent years. They believe they have, and have had, the talent in their system. They've just been waiting for it to mature.

And it seems that time has finally arrived...

For Laughton, it took nearly eight years from the moment the Flyers drafted him, and he is merely one example of an essential, yet underrated, factor that has the Flyers pointed toward a playoff berth and perhaps a decent run once they get there: time. This team needed time.

There were only so many people who wanted to hear that truth over the last several years, as former general manager Ron Hextall put the franchise through an exacting and incremental rebuild. And there were surely some who didn’t want to hear it even in the last several hours, as current GM Chuck Fletcher remained prudent and refused to make a splashy, roster-reshaping move at Monday’s deadline. But as much as the more recent changes and acquisitions — Vigneault, Hayes, Matt Niskanen, et al — have helped, that patience, that willingness to wait for players to come into their own at their own pace, has been an essential component to the Flyers’ improvement.

It was an uncomfortable, unfamiliar position for the Flyers to take. Always, they had been about the quick fix, the go-for-it strategy every year, until they reached the point that they simply couldn’t go for it anymore. They didn’t have the talent. They didn’t have the depth. In a salary-cap league, they didn’t have the spending power. If they wanted to be relevant again, if they wanted to get back to the excellence that once was routine for them, they really had no other choice. It took Hextall recognizing as much, and it took Fletcher continuing what he began. It took, and it will take, time.  [inquirer.com]