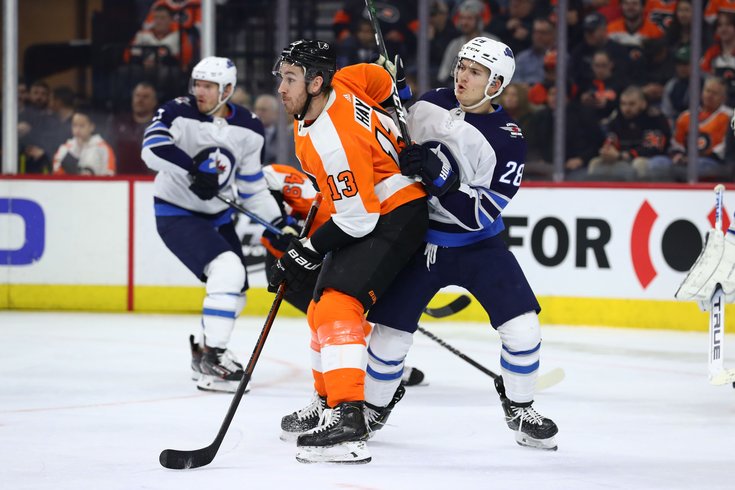 Few players have been as valuable to the Flyers this year as offseason signee Kevin Hayes.

The Flyers played a home game Tuesday night, which means it's a safe assumption that they won.

And while new additions Derek Grant and Nate Thompson didn't make a huge impact in Philly's 4-2 win to help them keep pace in a jam-packed Metropolitan Division, they did start, and their presence on the squad added to the energy. With just 19 games remaining now, every single effort matters.

Getting a power play seconds into a game is a good way to get some early momentum, and the Flyers really wasted no time getting on the board with a goal from Nicolas Aube-Kubel (on a perfect set up in front of the net from James Van Riemsdyk (and Matt Niskanen).

Holding the lead less than two minutes after the puck was dropped, Philly scored first for the 35th time this year — 24 of those resulted in victories. They were trying to continue an impressive trend as they are to 15-1-2 when holding the lead after one.

They couldn't add to that stat, as a rebound allowed by Carter Hart gave Joel Kellman a golden opportunity to slip one past the Philly netminder — which he did to tie things up midway through the first.

Interestingly, however, entering the locker room tied at 1, the Flyers were in comfortable territory again — they are 14-2-3 tied after the first 20 minutes.

Another "early" goal came less than four minutes into the second, when Kevin Hayes' 20th goal of the year (from Travis Konecny and Scott Laughton) put the Flyers ahead for a for good.

After the first goal of the game the Flyers kind of, well fell asleep. In a sleepwalking haze, they had trouble possessing the puck and looked sluggish for whatever reason.

After going ahead in shots 6-0, they allowed allowed 13 straight shots before a loud "ding" sound seemed to wake them up.

How the heck did this not go in to give the Flyers a 2-1 lead at the end of the first?

It's understandable that teams go through stretches of sleepwalking. It's a long season and they're long games. Luckily for Philly, they had a fairly sharp Hart in net and a fairly mediocre opponent in San Jose. If they slip into a daze like this against a better team it could spell disaster in a future and more consequential game.

Why is this a reason why they won the game? Well, because they snapped out of it and in an impressive way. It's nice to see a team jolt itself out of a rut before it's too late.

Hayes, as we mentioned netted goal No. 20 just minutes before the Flyers' lone All-Star (how did this team have just one?) Travis Konecny was able to find nylon on a stellar pass from linemate Hayes — his 22nd of the year to lead the team.

Philadelphia is 17-0-1 in games when Hayes scores a goal. Tuesday he scored two, the second just trickling in a few minutes into the third period (with assists going to Scott Laughton and Konecny).

Not to be dramatic, but we would die for Kevin Hayes.

He has three points so far tonight, with two goals and an assist! pic.twitter.com/Kq9vM0yDYV

Look at that hustle.

Hart was exactly as solid as you'd want your goalie to be in the 'W,' and aside from a pair of hiccups (one in the first and the second, a turnover in the Flyers' defensive zone leading to a Noah Gregor goal), Hart looked right at home (as his home and away splits no doubt can prove) in net. The second year franchise goalie sent away 26 San Jose shots and supported one of the NHL's best defenses in what turned out to be a cakewalk of a win.

On a night when Claude Giroux, Jakub Voracek and Sean Couturier were quiet, it was nice to see some of the team's other stars come up big.