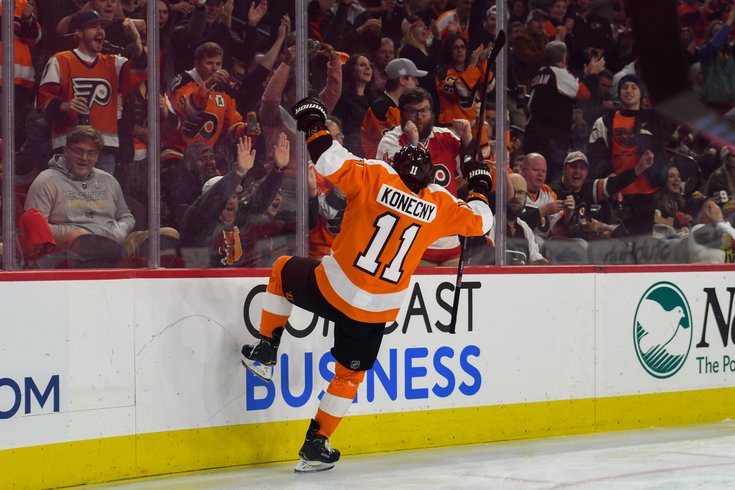 I remember sitting at my former radio studio during the true tanking of the Sixers, defending “The Process” to every other caller.

I was far from alone, but the point was more of what we weren’t talking about than the basketball team running itself into the ground. It didn’t matter what any other team (outside of the Eagles) was doing — it was Birds and Sixers all day.

I remember listening to the other station at the time and understood why the Phillies would make more of an appearance, as they carry the team. But the Flyers? "Who knows…"

It's the same answer Brett Brown gave in response to when Ben Simmons will return to the floor from his back injury. As things seemingly change over time, we find ourselves once again in a rather difficult predicament.

As a diehard fan of the team who’s well aware of how little media coverage it gets, why would you want every single game reduced to the idiocy of some caller or tweeter wanting to fire or trade someone after every loss? There’s a sense of purity in the sport that’s ruined every time someone – me included – unsuitable for hockey talk brings up the team, especially in a critical eye. We do need more coverage of the Flyers, but not in the way we’ve destroyed the nuance in talking about the Sixers.

That begs the question: How much of it is educating the educators? So I went to an expert.

Jason Myrtetus is a staple in Philadelphia covering the Flyers and NHL. He’s one of our best hockey minds, works for the team, and hosts shows. I asked Jason what prevents the Flyers from becoming a more popular topic of conversation.

"A couple of things prevent it from being a day-to-day conversation," he said. "It doesn’t have the same number of knowledgeable fans as other sports. The intricacies of hockey are far less known to casual fans than those of basketball or football.

"Also, what prevents the hockey conversation is a decent level of knowledge about the subject from on-air hosts. No host wants to drive conversation on a topic they are not well versed on. So they spew the bulls*** excuse that no one wants to talk hockey or that it doesn’t serve ratings well. The host’s job is to entertain and drive a compelling show, and most can’t if hockey is the subject. Why? Because they aren’t educated on the current team or sport enough to do so comfortably."

Think about how much the conversation is limited due to a basic lack of understanding of the game. At the same time, there’s very little drama that sustains conversation on the radio or TV talk shows.

I asked Jason about how all of us bandwagon fans can jump on without overstepping our place.

"New fans can listen to podcasts, go to games, or join fan groups," he said. "There are tons of ways to interact with other fans and new fans."

Check out Jason’s Stick2Hockey Pod and Snow the Goalie to start. I’ll see you in the (NHL) playoffs.

It’s been a while since I’ve ordered a boxing match on PPV. Like, Mike-Tyson-is-fighting-someone long time. Shamefully, I didn’t even buy the first Wilder-Fury fight, but made sure I was locked in this past Saturday night.

Despite the insanely long introductions – which I get since it’s their moment – the actual fight provided exactly what I wanted, an upset. It’s what makes sports so difficult to predict (and bet on) at its core, the underdog.

Fury came in with a plan, Wilder skipped three months of leg days. It wasn’t hard to do the math once you saw Wilder in the ring, his ear getting boxed in was a bonus.

The best reward in that fight wasn’t even Fury winning so much as the way it happened. The least likely of narratives actually played out where Wilder was TKO'd, defending his side throwing in the towel.

Most books had Fury winning by TKO at +430, and most experts told you Wilder hitting the canvas was impossible. Fast forward — we are two fights down — and I’ve had enough. Fury had way more claim to the first fight that ended in a draw and pummeled the “Bomber” in the second fight. Wilder lost a lot of sizzle based on how unprepared and ill-equipped he was in the ring. The best way to keep this momentum atop the heavyweight division is to not settle for a third fight.

One – small – highlight of the night was the fake licking of the blood by Fury:

@Tyson_Fury is a maniac. The licking the blood and the lizard tongue killed me. pic.twitter.com/B1YcluSjhg

It got me to truly laugh out loud. I thought it showed the one moment where Fury was in total control of everything inside the ring, and nobody said anything more than Joe Tessitore. At first, I thought Tess was just being over the top dramatic – like Joe Buck losing it after Randy Moss rubbed his butt on the goalpost – but it was totally glossed over by everyone there.

Nothing from Lennox Lewis, nothing from Brian Kenney, nada. I was shocked Twitter didn’t do more with it, I tried.

Major ball drop by the broadcast by not focusing on a really entertaining moment, especially since one of the fighters checked out in the first round.

Pop culture pick of the week:

I finished Omniscient almost immediately after starting it. I loved the show and can’t wait for the second season. If you followed along from last week, I explained the show and the murder mystery that unfolds. While you walk away knowing who the killer is, justice was far from served. The second season looks to highlight the growing divide between those who choose to live under constant surveillance and those who live outside the barrier.

I rolled right into The Stranger and binged through it. Also on Netflix, this one looks to be one and done, which is perfectly fine with me. Much like Fury-Wilder needing to end after two fights, this was the perfect eight-episode season, with an amazing ending.

The British show opens with a father at his son’s soccer match. A stranger walks up to the star and explains how his wife faked a pregnancy where she eventually said she lost the fetus. The stranger doesn’t want any money nor does she look to be blackmailing the father, she just drops the info and leaves.

Chaos ensues following an immediate confrontation between husband and wife, and we see the stranger continue to involve herself in other people’s lives around town. Trust me, you won’t find a better ending to a one-season show.

I have a really cool opportunity that I wanted to share with you! If you live, work, or play in NJ, PointsBet has a crazy offer that’s only available through my code "SHANDER". Sign up with this link with the code. You will get up to $1,000 spread out over four bets ALL risk-free!