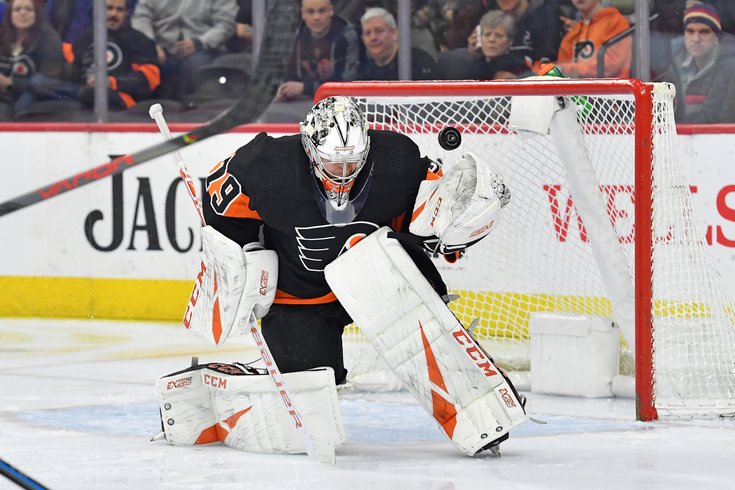 Carter Hart has been nearly unbeatable at home this season.

If you tried to make the argument that the Flyers are the best team in the NHL right now, you'd have an easy case to make.

Philly won its fifth straight overall and fifth straight home game 5-2 over the Rangers Friday night to earn points No. 80 and 81 to sneak into second place — at least temporarily — in the ultra-competitive Metropolitan Division.

It was a night were pretty much everything went right, as the Flyers continue to lift their level of play at the perfect time — with just 18 games remaining before the postseason kicks off.

Jake Voracek tied a career high with four assists, Claude Giroux had two goals and Kevin Hayes continued to wreck against his old team in a victory not lacking in highlights.

Voracek made Sean Couturier — who is red hot — look pretty darn good late in the second, as Coots drilled the equalizer (they trailed 1-0 early) after a perfect pass across the crease from behind the net from opportunistic Voracek.

Voracek finds Couturier in front for the goal! pic.twitter.com/wT9Vt6qckP

Couturier has been a leading candidate for the Selke (best defensive forward) for quite some time, but his offense has come on late as he's scored seven times in the last 10 games for the Flyers. He likely won't be setting a career high this season, he has 57 points now through 64 games (and had 76 last year), but he has arguably been among the most valuable skaters this season.

A Coots goal at home has typically meant good things for Philly.

A good trend for the @NHLFlyers: when Sean Couturier scores a goal this season, the Flyers are 13-3-1. They're 9-1-1 when he scores a goal at home. #NowOrNever

Couturier remains among the top 20 players in hockey in plus/minus and his goal Friday gave him seven straight 20-goal seasons. He was on the ice for the Flyers' third goal, a one-timer off Claude Giroux's stick (assisted of course by Couturier).

Carter Hart hasn't been a shut down goalie this season, at least not since his lone 2019-20 shutout back in October. But the second year pro has been "bend-but-not-break" good over his last 10 games. In that timeframe, Hart has gone 8-2, allowing two or more goals just twice. He's only lost one start since his return from his month-long injury hiatus.

A near magnificent save off the glove of Hart — on a Rangers breakaway that was spurred by a turnover — led to a rebound goal for Jesper Fast. The setback put the Flyers in an early hole. Hart was incredible from that point until almost the final buzzer, but he gave up a garbage time goal with just seconds to play (one he most definitely wanted back). In all Hart stopped 26 New York shots.

After a ferocious attack from the Rangers up a man in the middle of the third period, a Kevin Hayes one-timer (that was seconds away from being his fifth shorthanded strike) came at the tail end of an impressive penalty kill, led by Hart standing strong to Rangers aggression.

This Hayes goal is

Hart is now 18-2-2 at home, about as good as a goalie can perform in friendly confines.

Advanced metrics are not necessary to appreciate the Flyers' dominant win against the Rangers Friday. The club dominated in shots on goal (40-28) and in faceoffs (they won 67% of them), proving that simply peppering the puck on net and getting possession is still the most tried and true ways to win games in the NHL.

I have a lower-body injury just watching Georgiev do this. pic.twitter.com/16rOtPkiis

James Van Riemsdyk was able to take one of those 40 shots and fire it back on net, (on a blocked shot from Nicolas Aube-Kubel) to give the Flyers' their first lead of the night, 2-1 midway through the second frame.

A period later, Giroux got his second of the game and 19th of the year on the power play — another tried and true way to win hockey games.

One last note on hockey fundamentals. Beating teams in your division is the easiest way to make the playoffs. Against teams jockeying for positioning (or for a position) in the Metro, the Flyers have taken care of business.

Over the past three weeks, the Flyers have faced FLA twice, CBJ twice, and now get NYR twice. Basically your entire Eastern Conference bubble.

Assuming they hold on, they will have gone 5-0 against them, and can go 6-0 on Sunday. Just out here killing hopes and dreams.