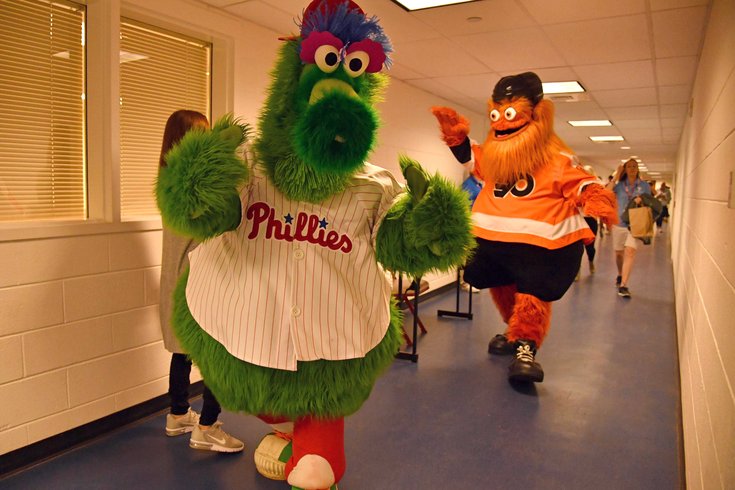 Gritty and Phillie Phanatic are good pals, and to the surprise of no one, the Flyers mascot fully supports the Phanatic's updated new look after the Phillies made some modifications to their mascot.

The Phillies unveiled a modified look for the Phillie Phanatic during their first home spring training game this past Sunday, and there’s one man (or mascot) who’s not here for any slander against the Phanatic’s new look: Gritty.

The Philadelphia Flyers’ mascot was spotted on the jumbotron at the Wells Fargo Center on Tuesday night rocking a blue tail, as well as pink stars and the same shade of blue as the tail around the eyes. The features that Gritty was rocking are some of the updates to the Phanatic’s outfit.

Gritty then doubled-down on his defense of the Phillie Phanatic by showing his support on Twitter and saying “Nobody talks jazz on my friend.”

Written on a sign in Gritty’s right hand was “I Stand With The Phillie Phanatic.” In Gritty’s left hand, the sign read “If you don’t, come see me…”

Nobody talks jazz on my friend. pic.twitter.com/AkdJsknAKT

The Flyers also got in on the fun, responding to Gritty with “NO. ONE.” and posting a closeup of Gritty’s eyes.

Given the accusations that Gritty allegedly physically assaulted a 13-year-old boy at a season ticket holder event this past November, or his swatting and taunting of a pair of nuns at a school in Philadelphia last month, we don’t recommend going at and messing with Gritty over his love for the Phillie Phanatic.

Gritty’s public defense of the Phillie Phanatic is likely a response to the mascot’s co-creators, Wayde Harrison and Bonnie Erickson, statement on Tuesday expressing dismay at the updates to the Phanatic.

“The Phillies lack of good faith in negotiating for an extension of the copyright assignment for the Phillie Phanatic is disappointing,” Harrison said. “But the unveiling of the so-called ‘new’ Phanatic on Sunday is an affront to our intellectual property rights and to Phillies fans everywhere.”

“For more than 40 years, we have worked closely with the Phillies, making all the Phanatic costumes, providing artwork and ideas until June of 2018,” Erickson said. “The Phanatic has performed successfully for the Phillies and the city of Philadelphia for decades. The ‘business decision’ by the Phillies to roll out this ‘new’ Phanatic is a transparent attempt to deny us our rights under the Copyright Act. We would love to have the real Phanatic continue with the Phillies.”

The Phillies and the Phanatic’s co-creators are in the midst of an ongoing legal battle over the copyright ownership of the mascot. The Phillies believe that they have full ownership rights of the Phanatic's likeness in perpetuity, while Harrison and Erickson believe they have the rights to cancel the current agreement in June of this year.