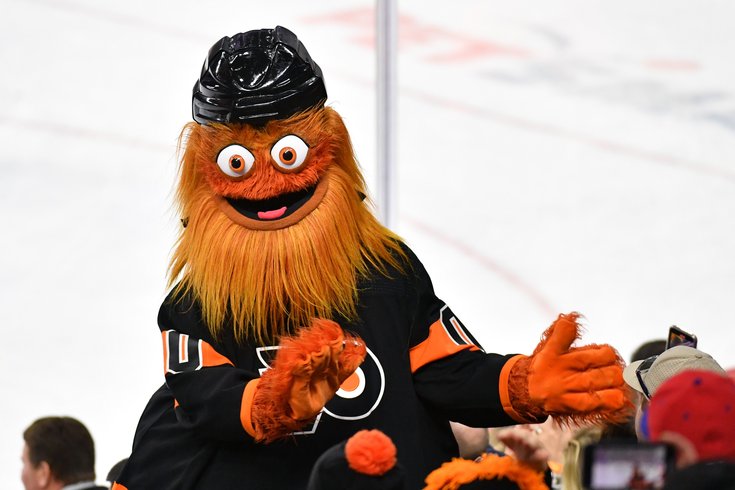 Fresh off not charges being pressed against Gritty by the Philadelphia police, the Flyers' mascot had some fun with two nuns at a Philadelphia school and was up to his typical shenanigans.

Philadelphia Flyers’ mascot Gritty is back to enjoying life as a free and innocent individual, and he appears up to his usual antics.

Philadelphians have seen the Flyers’ mascot do many obnoxious acts, including crashing a wedding two years ago in Northern Liberties. His latest stunt does not disappoint at all.

Gritty appeared at St. Francis De Sales School in Philadelphia last Thursday to celebrate the donation of a new AED via a partnership between the Flyers, Penn Medicine, and Philadelphia-area charity Simon’s Heart, according to NHL.com. The Flyers recently named Penn Medicine as the team’s official health system.

But video footage of the visit did not appear until Tuesday. And it was well worth the wait.

Some, if not all, of the visit included Gritty in the school’s gymnasium with students, teachers, and nuns. Two nuns are seen playing basketball in a mock pickup game against the Flyers’ mascot, and it doesn’t end well for them.

Gritty checks up the ball and begins to closely guard the first nun, who immediately tries to high-five and calm down the orange mascot. The nun tries a couple ball fakes and dribbles to get away from Gritty, but the mascot’s intense defense forces her to travel and give it up to her teammate, a second nun.

Upon catching the ball, the second nun immediately shoots it. However, Gritty isn’t fooled. He swats the nun’s shot away, then proceeds to taunt her by moving his googly eyes and thrusting his round, orange belly at her in classic Gritty fashion. He then turns away from the nuns and towards the crowd, as he receives a raucous ovation from the students sitting alongside the court.

Watch the video for yourself.

Ironically, the tweet of the video was the first on Gritty’s Twitter account since before he was under investigation for allegedly physically assaulting a 13-year-old boy during a photo shoot at a season ticket holder event this past November at the Wells Fargo Center.

Philadelphia police announced on Monday that Gritty will not face charges after completion of the investigation, saying that “the actions of the individual portraying the Flyers' mascot did not constitute physical assault as alleged."