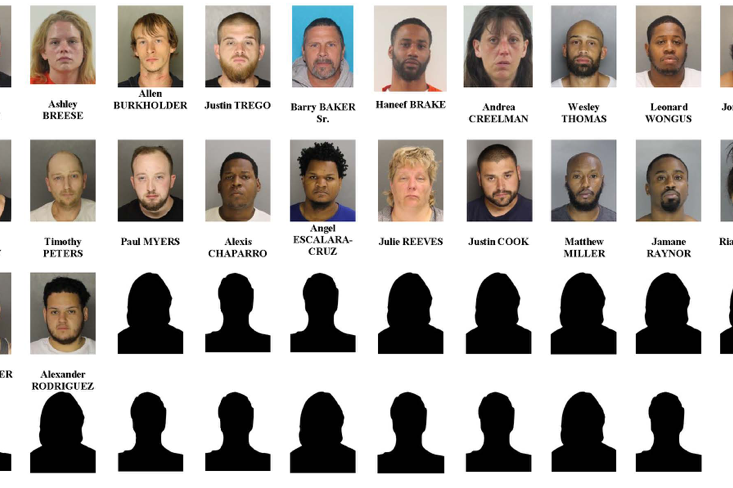 For the second time in the last three months, authorities in Chester County announced the results of another major drug bust, rounding up 46 people in a countywide undercover operation whose impact may be curbing drug overdoses relative to surrounding counties in the Delaware Valley.

During the course of the operation, undercover officers purchased heroin, Oxycontin, Percocet, Vicodin, morphine, MDMA, diazepam and Xanax, in addition to crack cocaine and crystal meth. The arrests took place in every region of Chester County.

In March, prosecutors announced the arrest of 49 people as part of "Operation Crushed Ice," an initiative launched in 2015 to track down a network of drug dealers working throughout Chester County. Authorities had regained custody of the network's alleged ringleader, 27-year-old Richard Maitre, who is believed to have run an Oxford-based drug trafficking organization both by air and by car.

At the time of the arrest, Hogan described drug dealers as a virus with far-reaching effects on the rest of society.

"They constantly shift and mutate, finding new ways to avoid detection and cause harm," Hogan said.

With a growing consensus that large parts of the nation are in the throes of an opioid epidemic, the numbers above show across-the-board increases over 2015 overdose deaths, according to federal statistics.

Chester County has managed to stay at the bottom of this list, recording 63 overdose deaths in 2015, but the scope of the problem hit home last month when two on-site drug counselors at a West Brandywine halfway house overdosed on heroin.

Pennsylvania Gov. Tom Wolf has made combatting the opioid epidemic a priority, signing a package of bills that commits $20.4 million to the operation of 25 statewide Centers of Excellence, which expand addiction treatment options and offer assistance to people with opioid-related substance use disorders.

Prosecutors did not immediately announce charges against the individuals arrested in Operation Wildfire.