Five players who impressed the most in Eagles' preseason opener 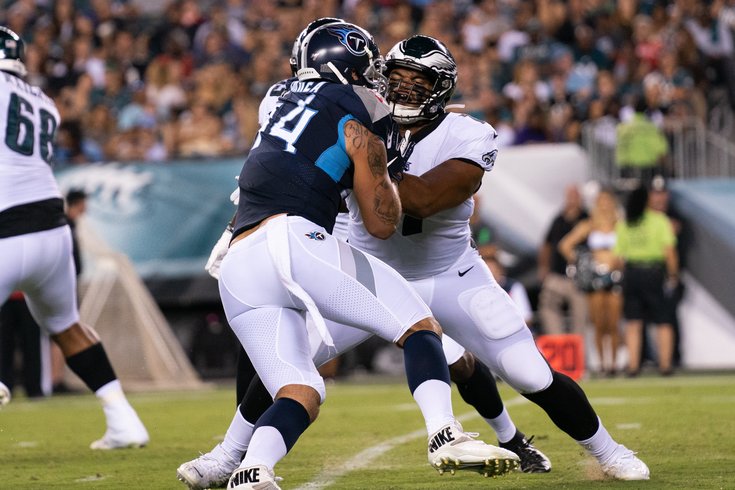 Andre Dillard, by all accounts, had a solid NFL (preseason) debut.

The Eagles team that took the field Thursday against the Titans is not the one that will host the Redskins on September 8.

So the pool of players fans watched at the Linc Thursday night in Philly's 27-10 meaningless loss was a bit diluted. But that doesn't mean there weren't standouts in the game.

Here are five players who were markedly impressive in the preseason opener:

Ladies and gentleman we have a highlight play. Running a deep post route early in the second quarter, Marken Michel was able to haul in a Nate Sudfeld bomb for a 75 yards and a touchdown. The throw was perfect and the catch required some concentration, as Titans cornerback Adoree Jackson was with him step-for-step.

Great ball by Sudfeld. Michel had to slow up juuuuust a liiiiitttttle bit, but that's nitpicking. Deep ball is easily Sudfeld's biggest strength.

Michel has been a dark horse candidate to make the Eagles 53-man as he's been making plays during training camp day in and day out for the second and third teams. He's sort of a journeyman, and at 26-years-old all his previous pro experience has come in the CFL with Calgery. He was in the Vikings training camp in 2016 as an undrafted free agent out of UMass but was cut. His brother is, you guessed it, Patriots running back Sony Michel.

With Mack Hollins still fighting his way back from injury, the Eagles' fifth receiver spot (assuming they carry five) is up for grabs. Michel's main competition includes Hollins, Greg Ward, Carlton Agudosi and the injured Shelton Gibson. Of course, if Michel keeps putting up highlight-reel catches like this, the Eagles could opt to keep six receivers. It's worth mentioning that Michel did show some versatility as he went in as a punt returner late in the game.

After being a lifelong special teams guy, Fort got a lot of chances at linebacker for the Eagles and he made the most of it Thursday. On a bad snap late in the second quarter he was able to help Shareef Miller nab a sack. He was routinely in on nearly every tackle and played like a true middle linebacker as he covered ground east and west and made four tackles.

The best linebacker on the field Thursday, Fort showed his athleticism in spades. Here's one of his better pursuits:

We wrote about Fort earlier this offseason, and he seems to have an opening to not only make the 53-man roster but also get some serious playing time with Kamu Grugier-Hill hurt.

Dallas Goedert said he thinks he would be the starter on 29 other NFL teams — and we are starting to believe it. With Ertz sitting out, the second-year tight end served as a security blanket for Sudfeld, finding daylight over and over again as he was targeted five times in Sudfeld's first eight throws.

He helped move the chains a few times in the opening frame, including a 24-yard catch that helped lead to an impressive 53-yard field goal for the first score of the game. In all he had 50 yards on three receptions.

Though Goedert will likely see most of his regular season reps in a "12 personnel" grouping — alongside Ertz — it is nice to see how effective he can be as the only tight end on the field.

It's hard to really quantify the production of an offensive lineman aside from relying on the eye test — one that Dillard mostly passed. Though he struggled at times in the run game, he looked stout and like he knew what he was doing, unlike fellow tackle Jordan Mailata who looked every bit like an Australian playing in his second ever season of football of any kind.

Dillard was the Eagles' first-round pick and will slot in as legendary left tackle Jason Peters' backup this year, but he looks like he could step in in Week 1 no problem.

And now for a name no one expected to see here. Hall is blocked on the depth chart by, let's see, Brandon Graham, Derek Barnett, Vinny Curry, Josh Sweat and Treyvon Hester. But he arguably had one of the most impressive performances Thursday night and seems to be every bit alive in his battle to make the squad.

Hall filled the stat sheet with six tackles, three for a loss, one sack and a pair of QB hits. He also kind of forced a fumble:

Daeshon Hall is honoring Steven Means with the preseason show out pic.twitter.com/mwhS77fUfM

Hall was a third-round pick by Carolina back in 2017 but was placed on IR and eventually waived a season later. He spent last season on three different teams' practice squads — the 49ers, Texans and then the Eagles. He is a product of Texas A&M.