Handing out 10 awards from the Eagles-Titans preseason game

On Thursday night against the Tennessee Titans, the Philadelphia Eagles lost preseason game No. 1, by the "who cares" final of 27-10. As always, we hand out 10 awards.

Carson Wentz's primary backup suffered a broken wrist near the end of the first half. Sudfeld reached back to break his fall after a hit by a pair of Titans defenders. It... did not look good:

Sudfeld left the field in a cart with an air cast on his left arm.

TV angle of cast on Nate Sudfeld’s arm. Not what you want to see to end a preseason half! pic.twitter.com/d2xvwEOBZZ

Prior to his injury, Sudfeld was up and down, but he looked like a mix of John Elway, Joe Montana, and Tom Brady in comparison to his replacements. (We'll get to them in a minute.) He was 10 of 18 for 177 yards, 75 of which came on a pretty deep ball TD to Marken Michel.

Sudfeld will have surgery, per Doug Pederson, so he'll be out for a while, though Pederson said it's not a season-ending injury. The Eagles will almost certainly have to bring in another quarterback to compete for the No. 2 job, because Cody Kessler and Clayton Thorson aren't the answer. The best available free agent quarterbacks at this point in the year? Josh McCown (who already retired), Colin Kaepernick, Brock Osweiler, Matt Cassel, and, you know, this guy...

The bet here is that the Eagles bring in an arm to take reps, while they wait for quarterbacks around the league to be released at cutdowns.

When Sudfeld went down, Kessler came in and played a little more than a quarter of some pretty crappy football. On the night, he went 3 of 6 for 12 yards. With Kessler in the game, the Eagles had one first down, by way of an illegal horse collar tackle.

Not to be outdone...

Right around the end of the third quarter, there was quite a bit of grumbling about the quality of play in this abomination of a game. And yet, Clayton Thorson had yet to enter the fray.

When he entered, Thorson announced his authority by dumping down a pass that fell way short of Donnel Pumphrey, who was wide open one yard down the field. Thorson actually made the EXACT SAME THROW during one of the Eagles' practices. 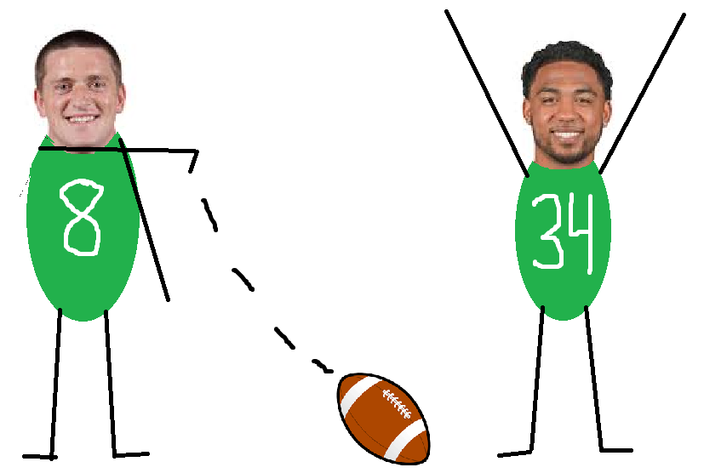 Thereafter, Thorson started taking shots down the field like the second coming of Rex Grossman, only 70 percent less accurate, with one pass getting picked, and another one that should have been picked.

4) The 'We're Screwed' Award: The Eagles' second- and third-string receivers

Seriously, those guys must be looking at Kessler and Thorson like, "These guys are going to cost me a job because they can't even throw a pass in my general vicinity."

If I'm Doug Pederson, Carson Wentz doesn't play a single snap in the preseason. Is there really anything to gain?

MORE: The good, bad and ugly from the first half of Titans-Eagles

6) The 'At Least It Was Only the Backups Who Stunk' Award: The actual good players

The bad news about the Eagles' ugly loss to the Titans, Sudfeld's injury aside? The Birds' third stringers looked bad. The good news? Almost none of their good players played, and the ones who did -- guys like Dallas Goedert and Avonte Maddox, for example -- looked good.

It's important to remember that most of the players you watched Thursday night won't be on the team in September.

As noted above, Michel hauled in a 75-yard deep ball from Sudfeld. However, what was even more noteworthy was that he beat a good starting corner in Adoree Jackson on the play:

Adams and Pumphrey both fumbled in this game. Let's just say that neither player can afford to fumble in the preseason if they want to make the team. Pumphrey has, like, a 0.1 percent chance of making the team, so who cares?

However, fumbling was an issue for Adams in 2018. He had a bad fumble on the Eagles' own 31 against the Jaguars with the Eagles clinging to a six-point lead with about seven minutes to go. Luckily for Adams, his butt cheek hit the ground a split-second before the ball came out and it got overturned. Against the Texans with a 13-point lead, Adams fumbled with a little over five minutes to go, and the Texans scored on the ensuing possession. Houston eventually took the lead in that game, and the Eagles needed Nick Foles heroics to win it late. Adams only got one carry in the playoffs, likely because the team lost trust in him.

I don't see how they can trust him to get meaningful carries in 2019, and it's not as if he offers much else as a receiver, pass blocker, or kick returner. What's his value?

9) The 'Where's the Growth?' Award: Jordan Mailata and Matt Pryor

The Eagles drafted Mailata and Pryor late in the 2018 NFL Draft, as they felt that both players possessed upside. The hope was that each player would make strides in Year 2 in the league, but their 2019 preseason debuts were... not good. Mailata was beaten on several occasions, and Pryor looked lost at times, particularly on a screen play that I intend to re-watch on the All-22.

One of the rare bright spots was Dillard. We'll get a better look when the coaches tape is released, but Dillard seemed to hold down his side of the line on the edge. So there's that.

Next week: At Jacksonville.