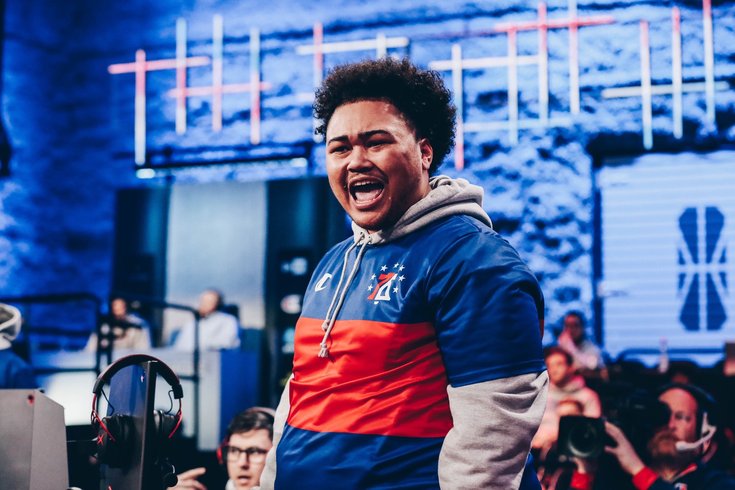 It's just been a month since the 76ers Gaming Club, the NBA 2K League affiliate of the Sixers, lost in heartbreaking fashion in the final game of their championship series against T'Wolves Gaming, but it's already time to shift focus to Season 3 of the NBA's esports league.

With the 2K League expansion draft just a few weeks away, teams are currently in the process of selecting two or three players to protect from being picked in that draft, ensuring they'll be back on the same team next season. And for 76ers GC coach Jeff Terrell, the decision is never an easy one.

This year, Terrell opted to keep MVP finalist Radiant (Ethan White), Steez (Alex Bernstein), who, like Radiant, will be returning for a third season with 76ers GC, and Breadwinner (Christopher Lafanette), who was a new addition to the roster in 2019 but played a crucial role for Terrell's squad.

"Bringing back our guys, it was a hard decision, deciding which three," Terrell told PhillyVoice. "I think we have four guys that are elite at their positions, so bringing back Radiant, Steez and Bread, I felt like that gives us three top players, top two players at their position. And I think all three of them are very, very good. They know what we want to do at 76ers GC. They all have great chemistry together, they get along off the court and we're just excited about Season 3."

But these decisions also possibly mean saying goodbye to two or three players, and in this case, that means a pair of guys who have spent each of the first two seasons with Philly and were guys who "helped build the foundation" according to Terrell: Newdini (Antonio Newman) and ZDS (Rashann Petty). They'll also be leaving oCassius (Sean Clayton) unprotected.

The 76ers GC, who finished 11-5 last season and won their second straight season opening tournament at The Tipoff, won't even wait until reconvening for next season to continue that growth. They've already planned an offseason trip to Las Vegas this fall to celebrate Radiant's 21st birthday. They'll also be spending time streaming games for the club and doing other NBA 2K League activities before reporting back to the practice facility full time in February.

And for the players returning, especially Steez and Radiant, who will be embarking on their third season here, it's obvious they feel like there's a little unfinished business.

"It means a lot [to be asked to come back]. Like Jeff said, we're the ones who helped put down the foundation for this team," Steez said. "There's a lot of work that still needs to be completed here. I've told the organization a bunch of times that my work here isn't done until I can bring this city a championship. Radiant and I have tried our best to do what we can this far with this team, and we've been very successful the past two season — the most wins of any team.

"But it does mean a lot coming from the 76ers organization and coming from, just being an ambassador of the 2K League, that we're doing the right thing. And when your team wants you back for two years in a row, that shows that you're doing something right and that you mean a lot to this organization."

I know that we're going to have a good shot next year to get right back to the same spot. Coming in next year, we just can't leave any doubt and just take care of business.

For back-to-back MVP finalist Radiant, there was never really any doubt he'd be returning to 76ers GC.

"I'm thankful for them bringing me back, I definitely want to thank the organization," he said. "But for me it's a little different. I don't go into the season wondering if I'm going to be brought back the next season, you know what I mean?"

"That's because he's our franchise player," Terrell added with a laugh.

One of the surprises on the 76ers GC roster this year was Breadwinner, who the team added in last year's draft and will be back for another season in 2020. If nothing else, his emergence as a key contributor to their team helped give the team confidence in their ability to build through the draft, with new players if need be.

"With Breadwinner, when we brought him in, we knew he was really skilled at 2K and he ended up being a really good addition to our roster," Steez said. "Our thing was really making sure that he was going to buy into our system and not be a selfish player. And once he figured out what that role was for him, especially defensively, he fit in really well.

"We know that we've got a Big 3 right here and it's going to continue to grow with two other role players coming into the draft. Like Jeff said earlier, having him, Radiant and me puts us in a good position to be able to win this year again."

While the 76ers GC is focused on next year, that might be in part because looking back on last season is still a little sore.

"At first, it was kind of tough to deal with, I'll be honest with you," Terrell said about the way in which his team's season ended in the 2K League final. "I think if we go play [T'Wolves Gaming] today, we'd beat them in a series. It's frustrating. It still bothers me quite a bit, but ultimately there were 19 other teams that wished they were in that position.