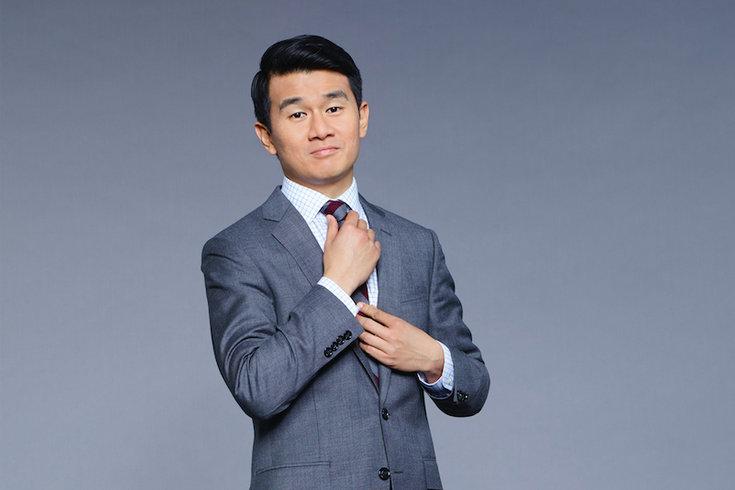 To American basic cable watchers and stand-up comedy lovers who’ll see him at Punch Line this weekend, Ronny Chieng knows how to tell and twist a news story.

The quirkily, controversial correspondent from Comedy Central's “The Daily Show” takes his time, whether touching on devout interfaith initiatives, Fox News' reporting, or Donald Trump's China policy. With each news piece, Chieng seems to slowly savor every beat and every pulse.

A large part of this relish comes from the fact that the Malaysia-born, Singapore-raised comic of Chinese descent spent his college years in Melbourne, Australia, where comedy follows longer, storytelling arcs.

“We have stand-up clubs in Australia – don’t get me wrong – but most comedy is performed during longer events in one-hour increments that you would know as the one-man show,” Chieng said from a tour stop in Hawaii.

“You can take one topic and tell the story at length with all the dramatic arcs and beats necessary. Not so many one-liner comedy routines. Instead, there is a real theater vibe to it all. Now, if you tried to do a typical Australian comedy set of one long story in America, you’d get killed, unless you were really skilled.”

There is one other huge difference, in Chieng’s estimation, between Australian comedy media and that of America.

“There’s less money to go around. America is the NBA of world-class television. You guys have the most hits.”

Chieng, however is no slouch when it comes to hit-making television as his semi-autobiographical sit-com, "Ronny Chieng: International Student," made him a god of Australian television comedy when it screened on that continent’s ABC network earlier this year.

“I wish I held the secret to god-hood,” he said, laughing.

“I just told the story of my experience as a student traveler, and being that Australia is my creative homeland, it caught on in a big way.”

Ask him how long the 31-year-old Chieng can pay a 19-year-old student, and he snorts.

“My good looks come before my talent in Australia. Hey, I have good genes, even if they are just Levi’s jeans.”

When the comic first came to America television for “The Daily Show” in 2015, the socio-political landscape and the weirdly pervasive mood-swing of a nation in transition was moving from the Left to the Right. Donald Trump announced his candidacy for the U.S. presidency at Trump Tower in June 2015, in New York City – right around the same time Chieng got to Comedy Central.

“I don’t know another mood. For all I knew, America could have always been Trump…Nah, didn’t come here naïve. I knew American politics well. I watched every episode of 'The West Wing' 10 times.”

For Chieng, getting “The Daily Show” was beyond his wildest dreams as a platform for his comedy, and a way in which to learn all aspects of the business.

“I‘ve learned so many skills, from editing and producing your bits, to improvising with Trevor [Noah, the show’s host]. Everything you do there needs to be on point in order to make fun of serious news in a smart and hilarious way.”

Like Noah, Chieng is unhappy that the current president – his antics and Tweets – are so ubiquitous, they have taken over the real news landscape, let alone the comic one.

“'The Daily Show’ comments directly on the news of the day, and yes, Trump has hijacked every bit of that, unfortunately,” said Chieng.

“Even when we tire of him, we must cover him. It is like Trevor has said, though: We must find ways of talking beyond and around Trump. We are forced to respond to Trump, but you have to have really original ideas. If not, you’re better off not talking about him at all.”

Chieng states that the same goes for his stand-up – (“make it unique or bust.") What about the roots of “The Daily Show?" What does it say about the premiere satirical news comedy program of its time that started off as Caucasian as all-get-out with host Craig Kilborn, only to wind up with a South African host, Hasan Minhaj – the show’s “Senior Indian Correspondent” – and Cheing?

“That’s a great question, and one you’ve already answered by observing it,” said Chieng.

”It is a sign of the times and where the country is going. I honestly feel as if race is one of the things that foreign-born people see when they come to America, and how it all blends together, and then they don’t see it anymore. When people watch 'The Daily Show,' all they see is a program that makes jokes at the expense of the news.”