For Abandoned NJ, a picture is worth more than 1,000 words 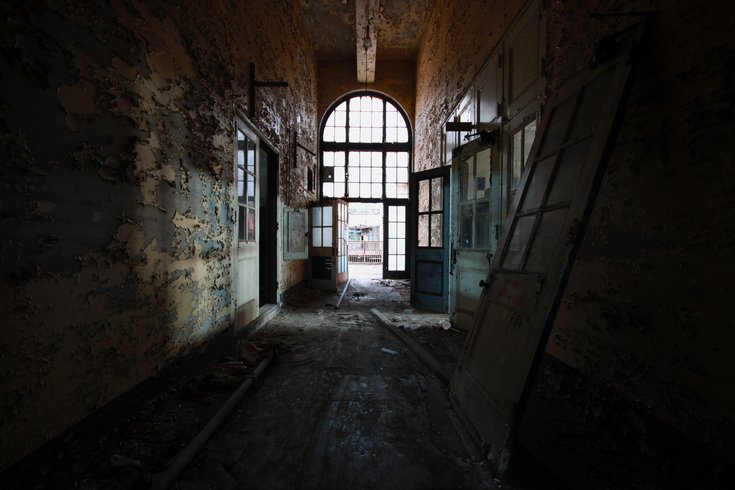 The interior of an abandoned power plant.

When Sean and Kathryn met just a few years ago, they had one important thing in common: They love to explore abandoned buildings. Being from North and South Jersey, respectively, they had plenty of opportunities to check out left-behind structures as kids, from old empty prisons to decaying hospitals, long-since closed. So when they came across each others' work online -- photos documenting their many adventures -- it was only natural they'd later meet in person, quickly become friends and begin seeking out new adventures, together.

Soon the couple turned their online postings into Abandoned NJ, an online space dedicated to documenting and preserving the memories of local abandoned structures. Friends they met along the way soon joined up and began contributing their own work and a full-blown community was born. As a group -- Kathryn and Sean, as its leaders, decline to give their last names or the names of their companions, as much of their exploration is dangerous and/or illegal -- Abandoned NJ has amassed thousands of fans across Facebook, Twitter, YouTube and Instagram.

Abandoned NJ doesn't think deterioration, decay and destruction are something to fawn over. They think it's an abomination.

An interior shot of the Church of the Assumption in Philadelphia.

"Part of it is fun, going on an adventure with your friends," Kathryn told PhillyVoice. "But so many buildings you see, you don’t understand why. Why would people leave this? Why is it just sitting there like that?"

As Kathryn, Sean and their compatriots have continued exploring spaces in New Jersey, New York and Pennsylvania over the past few years, they've often been troubled by structures that, once attractive and useful, are left unused, often for decades, until they're so ugly or unsafe that the community allows a developer to turn over the land for profit. These buildings are often seen as four walls and a leaky roof -- or worse, as an unfortunate reminder of the past -- rather than a home to countless memories and histories that should be preserved.

So was the case for the Greystone Park Psychiatric Hospital in Parsippany, New Jersey. The gorgeous structure, opened in 1876, was designed in the Kirkbride model, then a popular way of constructing mental health facilities to maximize natural light and create a healing sense of community. At its construction, its continuous foundation was the largest ever made in the United States. Woody Guthrie moved there in 1956 after Huntingdon's disease disabled him; the facility was operational until 2008.

Despite many, highly publicized protestations and campaigns to the contrary, Governor Chris Christie and the state of New Jersey deemed the building unworthy of rescue. Condemned to destruction, Greystone was leveled by October 2015. 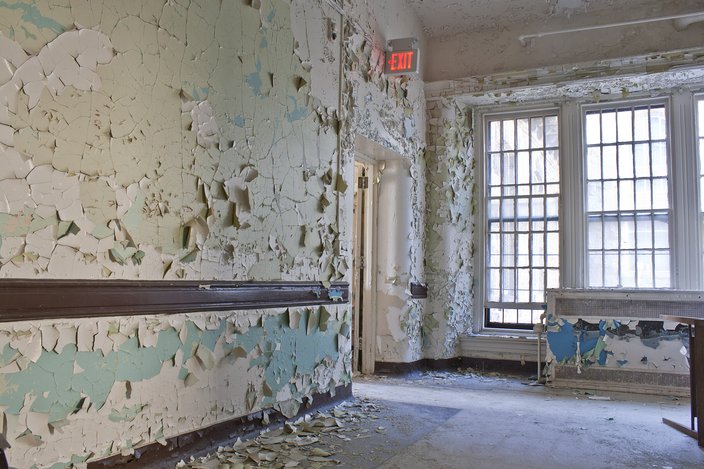 An interior shot of Greystone Park Psychiatric Hospital, demolished in 2015.

In addition to taking many photos of Greystone to raise awareness, Abandoned NJ got involved in these preservation efforts along with many other interest groups who wanted to see the building refurbished and reused. Though their shouts went unheard, PreservationWorks, an advocacy group that recently gained nonprofit status, sprouted up in Greystone's ashes.

These days, Sean takes part in an offshoot of PreservationWorks specifically supporting Hudson River State Hospital in Duchess County, New York. Like Greystone, it's a Kirkbride building; like Greystone, it has seen better days; and, like Greystone, HRSH is part of the nation's long, uncomfortable history of treating mental illness.

The prevalence of important abandoned buildings which used to be hospitals, sanitariums or prisons suggests that our nation's unwillingness to confront the deinstitutionalization of the 1960s and 1970s and its long-term consequences is one motivation for demolishing them. 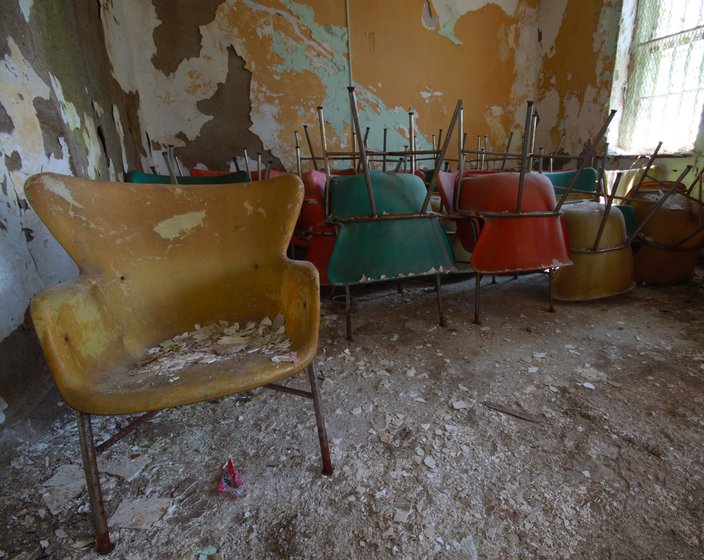 An interior shot of Greystone Park Psychiatric Hospital, demolished in 2015.

"There is such a stigma in the United States against mental illness, that so many people just prefer to bulldoze over these historical places instead of preserving their stories so current and future generations can learn from it," Kathryn told PhillyVoice.

However, unlike Greystone, preservationists' efforts at HRSH are making a real difference. PreservationWorks: Hudson is working with the developers refurbishing the HRSH site to preserve its historical and architectural significance for later generations.

"So, even though we lost one, we’re getting the ball rolling on saving several others," Sean said. 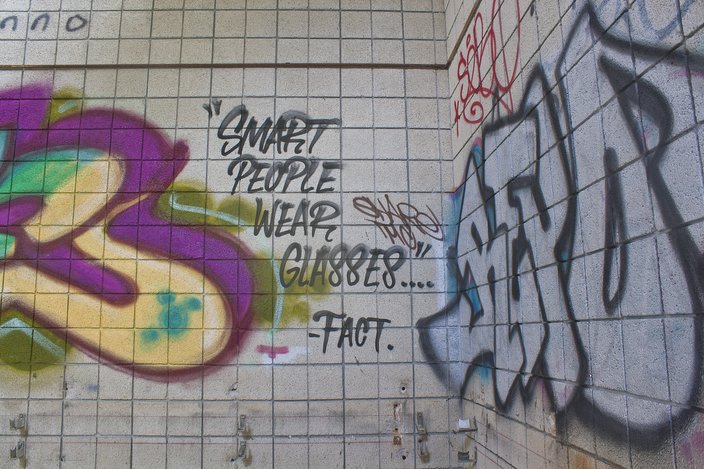 Of course, history and architecture aren't the only reasons to keep these massive structures around. Destroying things that could be reused is like tossing out perfectly good food: it's just a waste.

"It teaches kids to build things up and throw them away..." Kathryn said. "It's a waste of the environment...to build something up and tear it down just so you can put up something new in another couple decades when people decide it’s ugly again."

The Abandoned NJ crew may have begun their individual journeys just looking for the next creepy place to check out, but as it's evolved it has become somewhat of an awareness platform. Though the group is still all about posting cool images of newly discovered structures, rarely do they come unaccompanied by a reminder that these buildings have been laid to waste by man, unattended and forgotten, often for no reason at all. 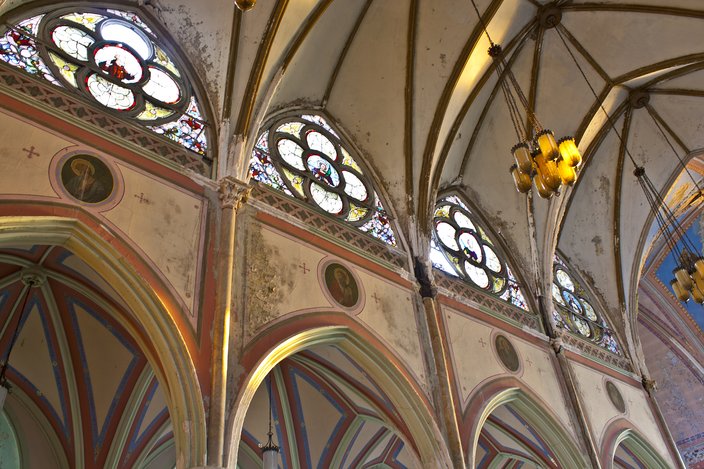 An interior shot of St. Bonaventure Roman Catholic in Philadelphia, which was demolished in 2013.

What you won't find with most new posts are locations or directions. Unless Abandoned NJ is trying to raise actionable awareness for a specific site, they refuse to lead viewers to any abandoned buildings - so don't even ask. While Kathryn, Sean and their cohort are merely taking photos and leaving each space untouched besides, they know not everyone is as kind.

Instead, eager explorers and wannabe preservationists can look into other campaigns or organizations that need their help. (Preservation New Jersey and Preservation Alliance for Greater Philadelphia are just two such organizations.) Every effort may not be successful, but it's advocates and supporters like Abandoned NJ that raise enough awareness for communities to reinvest in their abandoned structures. Without people like Kathryn, Sean, PreservationWorks and yes, even those who care enough to contribute an Instagram like or a Facebook share, public projects like the now-beloved Eastern State Penitentiary would never have happened.

"When we turn these buildings back over to the people that care," Kathryn said, "they go on to be reborn into new life."