An early look at the AFC and NFC Championship Game odds 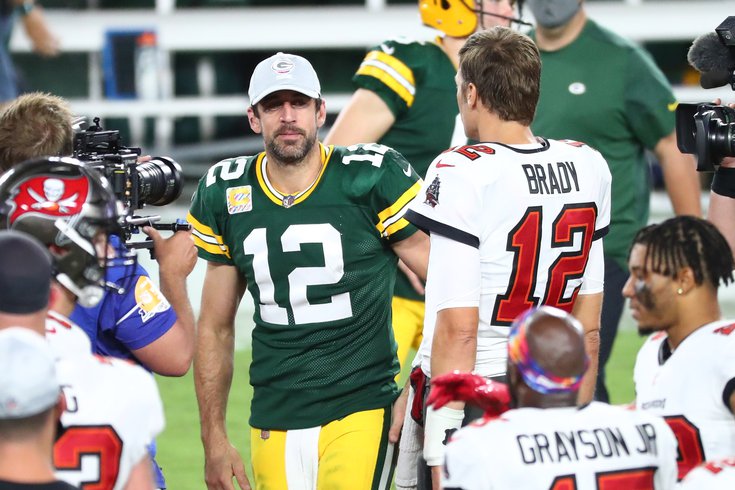 And then there were four — and four pretty damn good ones at that — left standing in the NFL playoffs.

With the divisional round in the books, there are just two more games standing between us and Super Bowl LV. And it's shaping up to be a great Sunday slate as the Bucs will travel to Green Bay to face the top-seeded Packers for the NFC title and the upstart Bills will go to Kansas City looking to knock off the reigning champs, who may or may not have their starting quarterback and former MVP.

As we do every week, let's take a look at the early odds for Sunday, courtesy of TheLines.com.

The first matchup of Championship Sunday features two veteran quarterbacks that haven't faced each other all that often throughout their careers, largely because before this season, the two played in opposite conferences. But now, Tom Brady and Aaron Rodgers will meet for the second time this season, but for the first time in the postseason. For the former, he'll be looking for his first Super Bowl berth in the NFC, but his 10th overall — and his sixth appearance since Rodgers won his only Super Bowl back in 2011. It's Rodgers, however, who is the favorite to win the NFL MVP this season and has his team as the No. 1 seed in the conference.

And while the quarterbacks will get the majority of the headlines this week — and rightfully so, considering they're both future Hall of Famers — there are plenty of other players to watch in this one who could wind up being the difference-maker on offense, whether that's Davante Adams and Aaron Jones for the Packers or Mike Evans and Chris Godwin for the Packers. With both teams ranking in the top three in points scored in 2020, there's a good chance this is a high-scoring affair (assuming the weather at Lambeau cooperates).

When these two teams met earlier this season, it was Brady and the Bucs getting the better of Rodgers and Co., 38-10, in what was the by far Packers' worst loss of the season. But that matchup was played in Tampa, where it was 88 degrees and much more comfortable for the 43-year-old Brady. This week, in Green Bay, the high is expected to be just 28 degrees, and there's a 40% chance of snow. That's not insignificant, considering that for all the success the Brady and the Bucs had through the air, they were one of the worst running teams in the league, finishing 28th in yards per game on the ground. The Packers, meanwhile, were eighth, which gives them the advantage should the weather play a factor.

That being said, Brady is no stranger to playing in the cold in January — and for as good as the Packers can be on the ground, the Bucs defense ranked first in all of football at stopping the run. This should be a good one.

While the first game features the two old heads still standing in the NFL playoffs, the later game features the two young guns: Josh Allen, who has looked like a future MVP this season, and Patrick Mahomes, who has already won both a Super Bowl and an MVP award. But there's a catch — Mahomes is currently in the concussion protocol after getting knocked out of the Chiefs divisional round win over the Browns on Sunday. If Mahomes can't go, it will be Chad Henne under center for Andy Reid's Chiefs, who are looking to defend their Super Bowl title from a year ago.

It also appears like it's offense galore this year in the NFL, as this game also features two of the NFL's top offenses, especially through the air. Both teams are in the top three in passing yards per game and the top six in points per game, while their defenses are good, but not great. That could lead to another high-scoring game — both these games have over/unders in the 50s — if the rain holds off in Kansas City.

And, like in the matchup that will precede them on Sunday, these two teams also met earlier this season. Oddly enough, it was the same exact week (Week 6). And in that Monday Night Football meeting, it was the Chiefs who came away with a 26-17 road win, thanks in large part to 245 rushing yards, including 161 from rookie Clyde Edwards-Helaire. He was held out of the Chiefs win over Cleveland, but is expected to be ready to go against the Bills. His return could be a huge boost to the Chiefs, especially if Mahomes is unable to go. If he can't play, look for this line to swing in the Bills' favor.